The 30-year-old claims his 15th major title and third US Open title. 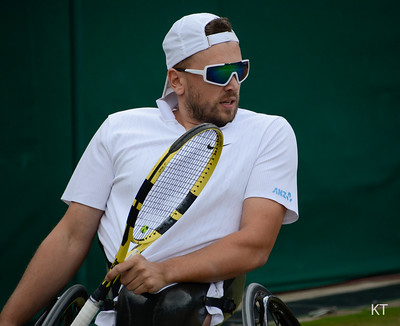 The achievement of a ‘golden slam’ is when a tennis player wins all four grand slams (The Australian Open, French Open, Wimbledon and US Open) and an Olympic/Paralympic gold medal in a calendar year.

Besides Alcott, Steffi Graf and Diede De Groot are also the only tennis players to complete a ‘golden slam’.

“I’ve now become the only male ever in any form of tennis I think to win the golden slam, which is pretty cool,” he said in a post-match interview.

I cannot believe it. We did it. We actually did it! pic.twitter.com/pncMvs8tgc

Alcott was overcome with emotion as he spoke about how much the win meant to him also reflecting on why playing tennis was such an important part of his life.

“I just can’t believe I just won the golden slam,” he said.

“I used to hate myself so much, I hated my disability, I didn’t want to be here anymore, [but] I found tennis and it changed and saved my life.”

Alcott graciously thanked his supporters and looked to the future with optimism.

“To everybody at home, I love you. Hopefully, this puts a smile on your face. Better times are around the horizon,” he said.

Alcott admitted to the Louis Armstrong Stadium crowd that the match could be his last ever at the US Open.

“I’m going to be upfront, I don’t know whether I’ll be back here, so I really appreciate everything,” he said.

Celebrating with supporters, Alcott showed up at the neighbouring Arthur Ashe Stadium to watch the men’s singles final between Novak Djokovic and Daniil Medvedev.

As the cameras were directed at him in the stands, in traditional Australian fashion he opened a can of beer, poured it into his US Open trophy and drank from it. He proceeded to tip the trophy on top of his head, prompting big cheers from the crowd.

.@DylanAlcott chugging a beer out of his #USOpen trophy is an absolute MOOD 😂 pic.twitter.com/YCFJr4GTTj

Photo: Dylan Alcott by Carine06 is available HERE and is used under a creative commons license. The image has not been modified.