Collingwood president, Eddie McGuire has been heavily scrutinised for his comments during a broadcast 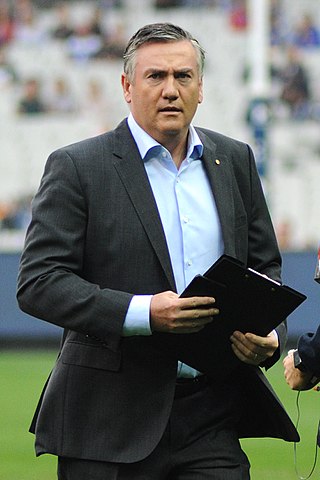 Eddie McGuire has found himself in the spotlight for all the wrong reasons this week, following his controversial comments during last Friday night’s broadcast.

During the AFL match between the Sydney Swans and Adelaide Crows, McGuire made reference to the coin toss saying anyone who is unable to perform it properly should be handed a $5000 fine.

What he claimed he didn’t know was that the lady who tossed the coin was former journalist and Swans ambassador Cynthia Banham, who lost both her legs in a plane crash in 2007.

But it is not the first time that McGuire has made divisive comments. In 2016 The Age posted a video of comments the Collingwood President made on Triple M around AFL reporter Caroline Wilson, landing him in hot water.

“In fact I reckon we should start the campaign for a one-person slide next year. Caroline Wilson. And I’ll put in ten grand straight away — make it twenty. And if she stays under, fifty,” he said.

McGuire also sparked controversy after saying that former Swans player and Indigenous Australian, Adam Goodes, would be a good candidate for King Kong.

Given his recent remarks and history of controversial comments, many journalists and media personnel are up in arms about his role in broadcasting. None more than Paul Daley, who is a close friend with Banham.

In a piece with the Guardian, Daley did not hold back, slamming McGuire and his frequent mishaps on air.

“Given all of his self-made successes (he) cannot be dismissed merely as some accidental dumb-arse,” he wrote.

Daly has been supported by many others in the industry, with ABC national sports editor, David Mark also unhappy with McGuire’s comments about Banham.

“Eddie McGuire’s disdainful comments about Cynthia Banham are so typical of the usual blokey and boring commentary bullshit in which put-downs and mocking in-jokes are the only schtick,” he said.

But the outrage did not stop there with assistant editor, Jenna Clarke writing an article in the West Australian, outlining her frustrations with McGuire’s influence in the media.

“McGuire, a white gentleman of enormous privilege, has form in the area of publicly insulting and ridiculing those who aren’t as blessed, male or able-bodied as him,” she wrote.

While many people are outraged with McGuire’s comments, News.com writer Corrine Barraclough has thrown her support behind the Collingwood media figure pointing out that everyone makes mistakes.

“I defended him then and I’ll defend him again now. No human being is perfect,” she wrote.

Paralympian and AFL Footy Show panellist, Dylan Alcott also spoke out against McGuire’s comments but threw his support behind the embattled media figure who has been under intense scrutiny following his comments of Friday night.

“There are a lot of people saying he should lose his job and things like that, and you know what, we all make mistakes,” he said on the Footy Show.

The wheelchair-bound tennis star highlighted that although the circumstances weren’t great, McGuire’s comments helped to spark a conversation about people with disabilities and the way they are perceived in society.

“I think it’s so awesome that this has come up so everybody can learn, because I’m always learning about things that I don’t know as well, and then we can just move on and bloody enjoy the footy,” he told the Footy Show.

McGuire stepped down from his call on the weekend between Essendon and St Kilda but is set to get behind the microphone for Round 3 of AFL action.

Photo: Eddie McGuire 2018 by Flickerd available here and used under a Creative Commons Attribution. The image has not been modified.