The legendary guitarist lost his long battle with throat cancer 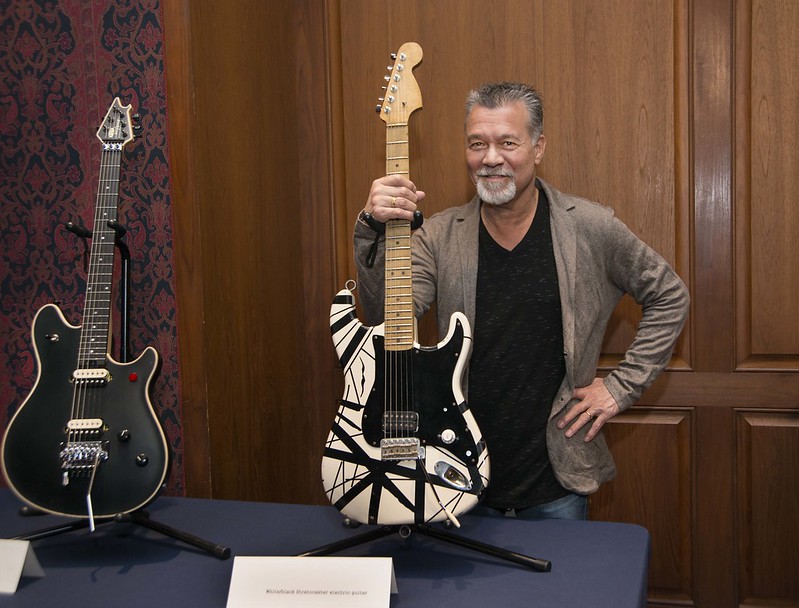 The co-founder of Van Halen – a hugely successful rock band named after him and his drummer brother, lost his lengthy battle with the illness on Tuesday at St John’s Hospital in Santa Monica, California.

By his side was wife of 11 years, Janie as well as his brother and Van Halen drummer Alex, and son, Wolfgang.

His son, Wolf Van Halen, confirmed the news on Twitter.

“He was the best father I could ever ask for,” he wrote.

“Every moment I’ve shared with him on and off stage was a gift.

“My heart is broken and I don’t think I’ll ever fully recover from the loss.”

Van Halen had been battling throat cancer since his original diagnosis in 2001. He lost one-third of his tongue to a cancer that eventually spread to his oesophagus.

In the last week, doctors reportedly discovered his throat cancer had moved to his brain and other organs.

The Rise to Greatness

Born in the Netherlands and raised in Pasadena, California, Eddie Van Halen formed the band ‘Van Halen’ along with his brother Alex, bassist Michael Anthony and singer David Lee Roth in 1974, after the group met while attending Pasadena City College.

Having started off playing in Hollywood clubs, the band would make it big in 1978 after releasing their self-titled debut album which sold over 10 million copies, kickstarting a rock wave which would follow into the 80s, kicking disco off the top of the charts.

The group quickly became a household name, releasing multi-platinum albums in five consecutive years: Van Halen II (1979), Women and Children First (1980), Fair Warning (1981), Diver Down (1982) and lastly, 1984, which would become their biggest hit including the classics Jump, Panama and Hot for Teacher.

It was no secret that Eddie Van Halen wrote and experimented with sounds while drunk or high or both.

With the inability to read music, in a 2015 interview with Chuck Klosterman he revealed that he would stay in his hotel room drinking vodka and snorting cocaine while playing into a tape recorder.

“Alcohol and cocaine were private things to me. I would use them for work. The blow keeps you awake and the alcohol lowers your inhibitions. I’m sure there were musical things I would not have attempted were I not in that mental state.”

Rolling Stone magazine has put Eddie Van Halen at number 8 in its list of the 100 greatest guitarists.

This was due to his iconic, acrobatic guitar playing which propelled the band’s appeal, earning him a reputation as one of rock’s all-time greats.

The band was inducted into the Rock and Roll Hall of Fame in 2007 and is among the top 20 best-selling artists of all time.

Eddie Van Halen also performed the epic guitar solo in Michael Jackson’s smash 1982 hit, Beat It, for a slab of beer as a favour to to producer Quincy Jones.

Eddie Van Halen’s death has rocked the music world, with friends and fans paying tribute to him.

“He fought a long and hard battle with his cancer right to the very end.

“Eddie was one of a very special kind of person, a really great friend. Rest In Peace my dear friend till we meet again.”

The world lost an icon, innovator, showman, virtuoso, master songwriter and perhaps one of the biggest inspirations ever to learn how to play guitar. Heartbroken to hear of Eddie Van Halen’s passing. Our love, condolences and best wishes to his his family, friends and fans. #RIP pic.twitter.com/pGhPUXRzyb

“My heart is broken. Eddie was not only a Guitar God, but a genuinely beautiful soul,”

Two of the best hours of my life were spent chatting with Eddie Van Halen. A great musician, yes – also a funny and lovely guy who will be missed terribly. Sending love to Janie, Wolf, Alex & all those who loved him.

American singer-songwriter John Mayer described Van Halen as “a stunningly good musician and composer. Looking up to him as a young kid was one of the driving forces in my needing to pick up a guitar. I was so blown away watching him exert such control and expression over his instrument.”