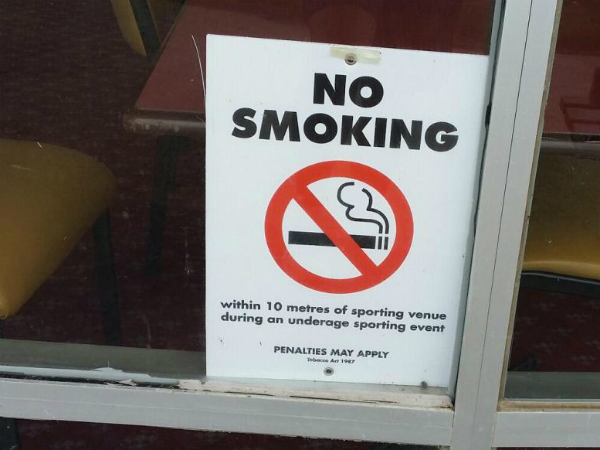 New reforms put in place on 13 April require smokers to be more than four metres away from the entrance to child care centres, primary and secondary schools and kindergartens.

Other reforms under the Tobacco Amendment Act 2014 include a ban on smoking within four metres of the entrance to hospitals, community health services and most government buildings.

Under the Act, smokers could face on-the-spot fines of $147 with a maximum penalty of five penalty units which equates to $738.

The new restrictions were originally due to commence on 30 June; however, the government brought this date forward to coincide with the beginning of the second term on the school calendar.

It would be easy to question why this policy wasn’t introduced years ago. La Trobe University Associate Professor of Psychology and Public Health, Dr Simon Barraclough, tells upstart that, in relation to smoking, it’s not that simple.

“When you look back you think: ‘Why did they not make a comprehensive tobacco policy when they found smoking was dangerous?’ But it doesn’t work like that. Especially with a topic like this that is so popular with so many people in society,” he says.

Thus, the government has adopted an incremental approach to policy making to slowly reduce the amount of people who smoke.

“What happens with the smoking policy is gradually they tighten the controls: increasing the price, reducing the places you’re allowed to smoke and simply make it more difficult to smoke,” Dr Barraclough says.

The most recent amendment to the Act follows on from April 2014, when the Victorian government banned smoking ‘where children play’ in a bid to keep the air clean around playgrounds, skate parks and junior sporting events.

These reforms are small steps towards the Victorian government’s arguably idealistic goal of a smoke-free society.

According to the Victorian government’s Better Health website, children with parents who smoke are more likely to develop asthma. In addition, passive smoking can cause coughing, wheezing, phlegm and breathlessness for young people if they are exposed to it for long periods.

“I’m thankful as a parent and a teacher because I think it’s wrong for kids to be exposed to secondhand smoke while parents are entering or leaving the school,” primary school teacher Daniela Lazzaro tells upstart.

“Obviously you can’t smoke on school grounds but they’d be just out near the entrances and it would annoy me,” she says.

The government’s main aim is to keep children safe from the dangers of passive smoking, but according to the Minster for Education, James Merlino, a flow-on effect could be a much needed shift in children’s mindsets.

“These bans are a vital step in reducing the normalisation of smoking for our young people. The more they see smoking in public, the more they might think smoking is okay when we all know it’s not,” Merlino said. This is a view that is shared by Jerril Rechter, the CEO of VicHealth.

“Smoke-free areas are about more than protecting people from passive smoke. They are also about role modelling what is and isn’t acceptable behaviour in the eyes of children,” Rechter said.

“The more children we can discourage from taking up smoking, the more lives we will save in the future,” Rechter said.

Deterrence is key for youth and these amendments to the Tobacco Act are working cohesively with the plain packaging laws to avoid an increase in young people taking up smoking.

According to a study undertaken by the British Medical Journal, the plain packaging initiative has been successful in reducing the appeal of smoking among adolescents and young adults.

As Dr Barraclough explains, a smoke-free future is a “utopian goal” that is unlikely to be achieved.

However, by tackling smoking in a gradual manner, the Victorian government is looking to create better environments and attitudes, and aiming to get as close to this goal as possible.