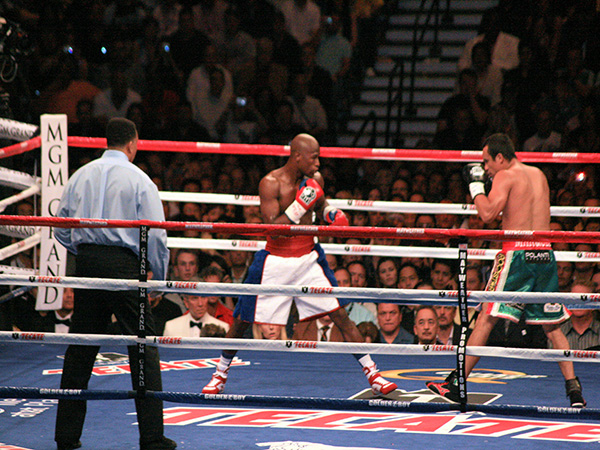 The highly anticipated and profitable boxing match between Manny Pacquiao and Floyd Mayweather was surrounded by public outrage about Mayweather’s criminal history of violence against women.

Mayweather has been convicted of domestic violence five times since 2001, spent two months behind bars and yet he has never been suspended by the Nevada Athletic Commission.

Many have questioned how a person who has been charged with multiple counts of domestic abuse is still allowed to compete and become the highest paid athlete in the world.

“There’s not a lot you can do… apart from expose him and talk about how unacceptable that is,” Suzanne Dyson, public health researcher and associate professor at La Trobe University, tells upstart.

While some have called for Mayweather to be banned and boycotted, Dyson says that’s not necessarily the most effective approach.

“Boycotting and banning would probably give him more oxygen than just exposing him and making clear that he’s not a person who’s an appropriate role model,” she says.

Dyson, who has worked with VicHealth and the AFL in preventing violence against women, said the issue has been on the public agenda in Australian sport since 2004, when a number of sexual harassment allegations were made against AFL and NRL players. Both codes went on to adopt programs aimed at preventing violence against women, the Respect and Responsibility and Sex and Ethics programs respectively.

While some argue that more needs to be done to stop domestic violence among elite athletes, it’s clear that Australian sporting bodies take violence against women seriously.

In March, retired Carlton player Nick Stevens was found guilty of brutally assaulting his former girlfriend, Laima McKenna. He was head coach of Glenelg SANFL club until being found guilty, after which he was immediately sacked. He was sentenced to eight months jail.

In November 2014, Rabbitohs players Cody Walker and Kirisome Auva were charged with variations of domestic abuse. Both players were stood down indefinitely.

“Everyone needs to understand that if you are violent against women there is no place for you in Rugby League,” Australian Rugby League Commission CEO David Smith said.

“We recognise that we also have a duty to help with rehabilitation where incidents occur and that is why it will be a condition of his return that Kirisome completes appropriate prevention treatment,” he said.

Australians agree that violence against women is a serious issue that needs to be prevented and in sport it’s also bad publicity for the players, clubs and codes, whether directly or indirectly involved.

Violence against women has been highlighted as a serious issue in Australia. In sport, it can also lead to bad publicity for the players, clubs and codes, whether directly or indirectly involved.

“There’s no question that when you’re talking about the sports entertainment industry and elite athletes you are talking about brand control and brand protection,” says Dyson.

“What the AFL did back in about 2005/6 was go, ‘hang on, we’ve got some elite athletes here who are being violent and women are looking at us and saying “that’s not acceptable, I don’t think I want my children to play football”’ and they realised that their feeders were being affected.”

Australian sporting bodies should be commended for their hardline approach but violence against women remains a huge issue, both socially and in terms of public health.

The UN estimates that 30 per cent of women worldwide who’ve been in a relationship have experienced physical or sexual violence from a partner.

Dyson’s focus is primary prevention. She says there’s still plenty of work to be done, especially in educating young people about healthy relationships.

“A lot of young men don’t understand what consent actually is. They assume that just because she’s too drunk it’s okay to go ahead and have sex with her and it’s not. That is not consent. It becomes rape.”

Violence against women isn’t always a physical assault, it comes in many forms. It doesn’t just affect elite athletes, it affects the whole community.

Good role models are important in the prevention of domestic violence, and Floyd Mayweather is not one.

“It has to start early,” Dyson says. “I think we have to start talking to young children from the very beginning of their lives about respect about treating each other kindly.”

Victims of domestic violence can contact the national counselling helpline 24 hours a day on 1800 737 732.