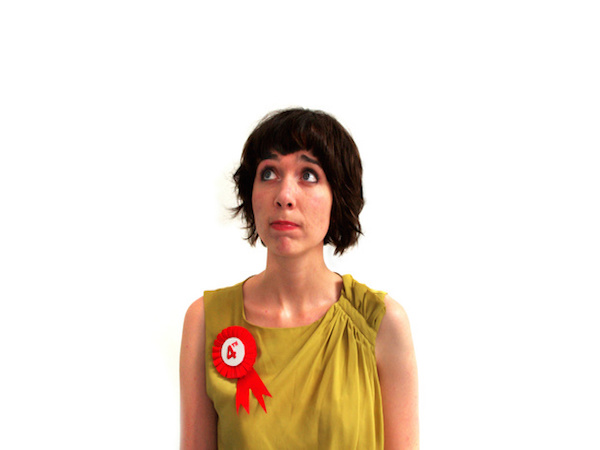 Davie believes that comedy and failure go hand in hand, and this theme runs throughout her Melbourne International Comedy Festival show, Also-ran.

In the trailer for Also-ran, three people stand on a podium. They each hold flowers and eloquently wave to the crowd as comically grand achievements are listed under their names. Davie then fumbles her way next to the podium with her own crate to stand on. She holds withered flowers and wine, and beams while a list of not-so impressive achievements–such as having 12 Twitter followers–appear under her name.

The trailer is foretelling of Davie’s awkward, likable and verbose personality, and her light-hearted sense of self-deprecation.

“I chose the name Also-ran because I’ve always liked the concept of coming somewhere between third and last. You don’t even have the distinction of being last,” Davie says.

Davie’s first solo stand-up show is an autobiographical account of her 27 years of life.

“It’s the edited highlights,” she says.

“Almost everything did happen the way I said. I do embellish a few things, but most things are really true. It’s just that it’s presented in a different context.”

Unsure of what she wanted to do in life, Davie sought the help of a life coach. Her life coach told her “you are the composite of people you spend most time with” and it was this idea that inspired the storyline of Also-ran.

The show is a comedic pursuit to find who was responsible for making Davie the type of person who needed a life coach. This framework provides the perfect context to share humorous stories about Davie’s friends and family.

As well as providing her with inspiration for her comedy festival show, Davie’s life coach also gave her direction in life.

“I’ve had issues with anxiety before and that’s something I talk about in the show,” she says.

“I just wanted to be enthusiastic about things and I’d sort of hit a really big creative block, so it was a really great way of figuring out what I wanted to do. Once I’d seen her [the life coach], I started doing stand-up.”

The transition to solo comedy has been both a rewarding and challenging experience for Davie.

“Because it’s my debut show, I’m kind of bringing together the best material that I have,” she says.

“There’s more pressure when you’re on your own because there’s no-one to spread the burden with, or commiserate with if things are going badly, or celebrate with if they’re going well.”

Outside of comedy, Davie studies communication, works in marketing, and has dabbled in a few different Arts degrees. She says she is still unsure whether she wants to be a full-time comedian.

“I feel like I can be more anxious about things if they are a job,” she says.

“I’m never as creative when I’m stressed about stuff.”

Davie admits to being competitive and a perfectionist as a child, and says she had to work a lot on relinquishing control. However, one of the underlying messages of her show is that life is not about winning races.

“I think its important to make sure that the race you’re trying to run is your own race,” she says.

There may have been times in Davie’s life where she has finished somewhere between third and last, but for her it doesn’t matter because it always leads to a funny story.