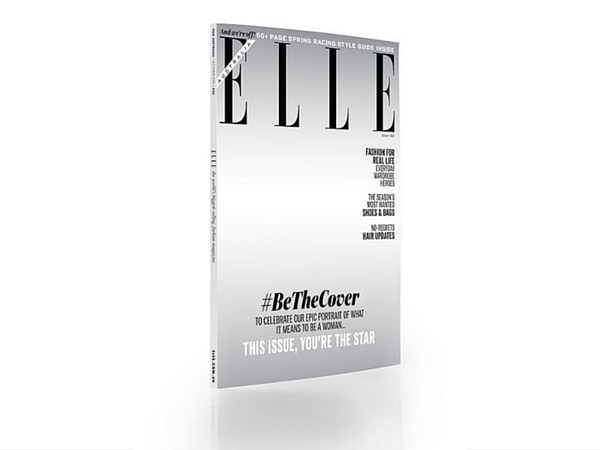 In the business of glossy, high-fashion magazines, the cover image is vital.

These covers are said to sell magazines, so the cost of landing the perfect celebrity face can often be an expensive exercise.

However, Elle Australia has taken a cheaper approach this month, while undermining magazine trends at the same time.

The October issue features no front cover model, but instead a mirrored cover so reader’s faces can be reflected onto it.

The magazine has invited readers to share images of themselves on the front cover to social media, using the hashtag #BeTheCover.

The #elleaus October issue starring YOU! Pick up a copy and post your own cover from Monday. PLUS, check out our epic portrait of what it means to be a woman inside. #BeTheCover #teamELLEaus

“The reflective cover is an Australian magazine first. Our readers have come to expect that we will challenge their expectation of what it means to be an Elle covergirl,” publisher Marino Go said.

“With the reflective cover we are demonstrating the diversity of our audience. Our readers can literally look at the magazine and imagine themselves on our cover.”

It is, however, not the first time a magazine has used its front cover to make the reader the star.

In 2006, Time Magazine named ‘You’ (its readers) as the person of the year, and used a mirror as its feature image.

“I think it’s always exciting when publishers and editors decide to do something new. And this certainly makes an impact. This is possibly the first time a fashion magazine has employed this tactic,” Sherwood says.

This isn’t the first time that front covers of Elle Australia have been a talking point.

Earlier this year, the magazine featured Australian model, Nicole Trufino, breast feeding on the cover of its June edition.

Elle also claimed that their July 2015 cover, featuring Nicole Warne, was the first time a blogger had appeared on an Australian fashion magazine cover.

“They [Elle] certainly aren’t afraid to change things up, and I think that’s exciting for readers and fans of magazines generally,” Sherwood says.

She says it will be interesting to see how the cover is received by readers.

“There is no doubt that celebrities have huge pull in terms of selling magazines,” she says.

“It’s a gamble I hope pays off for Elle, not just because of the design but because of the excellent #WeAreWomen campaign which goes along with it, but I think we will have to wait and see.”

The #WeAreWomen feature captures the portraits of different Australian women, alongside their stories.

“We hope our cover execution will encourage our readers to add their story to this history making snapshot,” Justine Cullen, Editor-in-Chief of Elle, said.

“It has the message that ‘you are just as beautiful as any model we could put on the cover’,” she says.

“It highlights what is special about each reader and positions Elle as promoting positive body image, which combats the negative associations and criticism that often come with a glossy magazine.”

Brugliera says the magazine will receive a lot of social media attention.

“I’ve seen it pop up on my Instagram feed a number of times, with people posting themselves on the cover. People are more likely to purchase Elle, just so they can Instagram it.”

She says this sort of cover wouldn’t suit Fashion Journal‘s brand, but it does encourage her to think more creatively about the design of the magazine.

“I think for each issue it’s important to consider what can be done differently. This is a good reminder to think outside the box.”