Paralympic swimmer and La Trobe Student, Emily Beecroft, looks beyond her setbacks in order to inspire others. 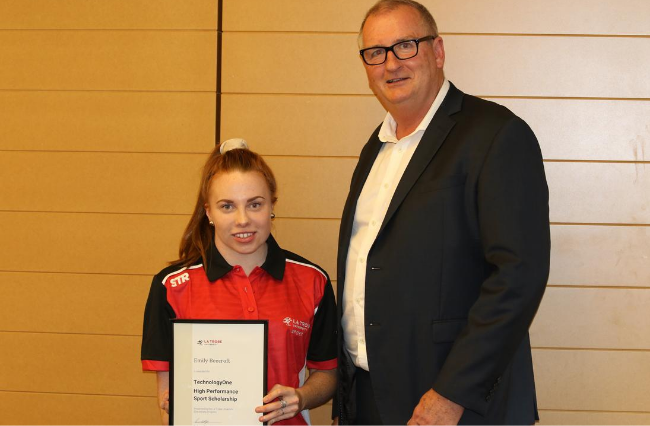 In late July 2016, a young Emily Beecroft relaxed on the couch of her hotel room with her parents. The Australian swim team was set to be announced for the 2016 Paralympic Games in Rio.

Although having an impressive 2015 season in the S9 category, Beecroft went into the Paralympic trials with little expectations of herself.

“I was not expecting to make the team at all. My goal has always been to make the 2020 Tokyo team,” Beecroft told upstart.

This was until her coach, Dean Gooch, came bursting into the hotel room.

Gooch tells Beecroft that she has just qualified to represent her country at the Paralympic Games at the age of 16.

“It was surreal. That’s a moment I’ll definitely remember forever.”

The 20-year-old para-swimmer and part-time student with La Trobe University’s Elite Athlete Program has always been up for any challenge that confronts her.

Beecroft was prematurely born a triplet in November of 1999 with sisters Keeley and Maddi. But she would remember most of her childhood memories in the care of the Royal Children’s Hospital.

Beecroft was born with a radial limb deficiency, causing a clubbed hand on her right arm, deafness in her left ear and mild scoliosis.

Growing up in the small town of Traralgon, 164km southeast of Melbourne, Beecroft enjoyed sport and tried her hand at para-sports like netball and athletics. But taking after her sister, she found a second home at the Traralgon Swimming Club.

“Swimming was one of the main sports and clubs in town,” she said.

“I thought it was one of the easiest pathways for someone with a disability and one of the most inclusive. I spent most of my time [growing up] swimming and just hanging out with my sisters.”

Once a week Beecroft will make a three-hour train ride to Melbourne and back to take part in her part-time study of Media and Communications. With an already busy training schedule, it may seem an inconvenient trip, especially with her aunty living in the city who has a pool nearby that she often uses for training.

But keeping Beecroft at home, outside of her loving family and sausage dog Hugo, would have to be her coach Dean Gooch. Gooch has been training Beecroft since 2012 at the Traralgon Swim Club and no one has made an influence on her career quite like her coach.

“He’s the best [coach] I’ve found. We have a really close relationship,” she said.

“He’s so cool. He’s really taught me about swimming, and I like to think I’ve taught him as well about the para world. He’s really helped me, and I would not be where I am today without him.”

It was this commitment to swimming that saw Beecroft to her breakthrough Paralympic Games as a 16-year-old. She made the finals in three of her four events and came 0.03 seconds off a bronze medal in the S9 50m freestyle, much to her own surprise.

But what Beecroft considers her greatest achievement to date is the lasting impact she has made with people, especially from her Traralgon hometown in such a short time.

When Beecroft first started swimming in 2010 she was the only para-swimmer competing in her Gippsland region and would have to go to Melbourne in order to race or train with other para-swimmers. Now there are four para-swimmers at the Traralgon Swimming Club with many more within Gippsland.

“Helping inspire people, to show them that swimming is a great sport to be involved with if you have a disability…. It’s very surreal,” she said.

“I’m quite an introvert so I don’t exactly see myself as a role model… I’ve always looked up at others and I never thought people would look up to me.”

Although staying out of the water throughout the COVID-19 lockdown has been difficult, Beecroft’s determined and hard-working characteristics drive her, with the ultimate goal of making the Australian Paralympic team for 2021.

“I’m very self-motivated. I like trying out new things and finding new ways to push myself.”

“Making the Tokyo team has been my goal for so long. That definitely keeps pushing me. Just remembering that goal and wanting to make the team so badly.”

Bailey Zimmermann is a second-year Bachelor of Media and Communication student (Journalism) at La Trobe University. You can follow him on Twitter @bailey_zim

Brittany Carlson is a second-year Bachelor of Media and Communication (Journalism) student at La Trobe University. You can follow her on Twitter @media_brittany