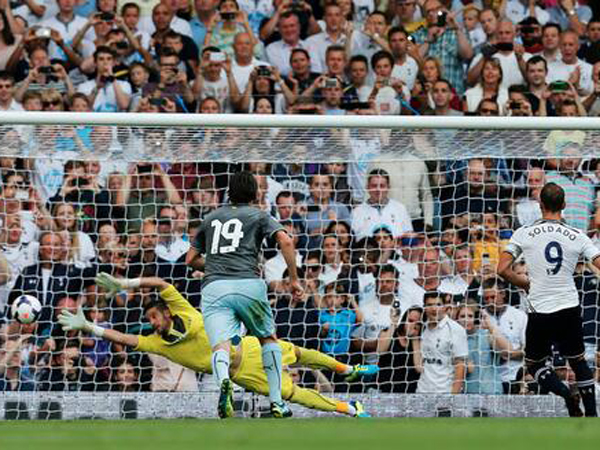 The English Premier League starts this weekend, in what might just be the most exciting and closest season yet. upstart’s sports editors have taken it upon themselves to preview the chances of each of the 20 clubs over the next two days. Here are the first ten.

Aston Villa
Prediction: Relegation battler
Last season was a very disappointing one for Aston Villa. The team left it extremely late to secure Premier League survival, and no doubt give many of their fans more heartache than pleasure. Paul Lambert’s focus on youth is vital for the future of the club, however he needs to be careful it doesn’t come at the cost of relegation.

Key Player: Christian Benteke
Christian Benteke has just signed a contract extension with Aston Villa, putting an end to the speculation that he would leave the club. Without a doubt Villa’s most important player last season after scoring 19 goals, Benteke will be out to prove he’s not just a flash in the pan. If he’s on fire, Villa should have no trouble avoiding the drop.

Cardiff City
Prediction: No hope
This is the first time in 51 years that Cardiff City will play in the Premier League, but it will certainly have its work cut out for it if it doesn’t want to go straight back down. Cardiff gained promotion by winning the Championship last season, so Malky Mackay and his team already have a winning mentality. However, it remains to be seen just how long that will stay.

Key Player: Steven Caulker
Expect Steven Caulker to shine within the Cardiff team. The former Tottenham defender was bought for a club-record fee, and will anchor the Cardiff backline. He and the rest of the defence will have to put in some mighty performances to avoid relegation.

Chelsea
Prediction: Title chaser
The value Jose Mourinho’s return can’t be underestimated. The self-styled ‘special one’ was in charge of Chelsea for its most successful period, and with him back at the helm the team are definitely one of the favourites to win the league.

Key Player: Eden Hazard
Eden Hazard had a brilliant start to last season, and quickly cemented himself as a vital part of the Chelsea setup. If he can keep his form at the peak of his game, Hazard has the potential to be a truly world-class midfielder. Under Mourinho, he should become just that.

Everton
Prediction: Europa League contenders
It’ll be interesting to see how Everton adjusts to the change that Roberto Martinez will bring to the club. Under David Moyes, the Toffees were one of the most consistent sides in the competition over the past few seasons, so Martinez will have his work cut out for him if he hopes to keep that consistency going.

Key Player: Marouane Fellaini
The tall Belgian was linked to a number of larger clubs, however it looks as if Fellaini will be staying at Goodison Park. It remains to be seen how he will fit in to Martinez’s passing-orientated game, as opposed to the more direct style of play that Moyes often favoured. He has match-winner written all over him.

Fulham
Prediction: Mid-table mediocrity
Martin Jol has made a number of good signings over the break. Goalkeeper Maarten Stekelenburg, defender Sascha Riether, and midfielder Adel Taarabt will all make significant contributions to Fulham this year, so don’t be surprised to see them climbing up the table.

Key Player: Dimitar Berbatov
The Bulgarian striker has scored goals at every club he’s played at. He scored 15 last season in his first year with Fulham, and will need to lead the attack once again this year. He has an uncanny ability to score at any moment.

Hull City
Prediction: No hope
Another of the newly promoted teams, Hull will find the Premier League extremely tough going. Hull City fans will be bouyed by the news that Tom Huddlestone has just been signed from Tottenham, with his ex-teammate Jake Livermore reportedly close behind him. However, it’s tough to see Steve Bruce’s team putting up much of a fight this season.

Key Player: Tom Huddlestone
There is no question about the quality of Tom Huddlestone. The midfielder is known for his great passing, and if he can link up with Danny Graham up front, Hull may just have a fighting chance. Fantastic signing.

Manchester City
Prediction: Winner
Manchester City increased its already impressive playing stocks over the off-season, with players like Jesus Navas, Alvaro Negredo, Stevan Jovetic and Fernandinho all joining last year’s runner up. New coach Manuel Pellegrini’s toughest battle will most likely be trying to manage the many egos of his team. Regardless, City has far too much star power and should be right up near the top when it comes to the pointy end of the season.

Key Player: Sergio Aguero
Sergio Aguero will lead the attack for Manchester City, after the departure of Carlos Tevez at the end of last season. The Argentine has scored 47 goals in 88 appearances for City, and will be even hungrier this season with much more competition lining up behind him for his spot in the team.

Stoke City
Prediction: Mid-table mediocrity
After seven years under the tutelage of Tony Pulis, this season Stoke will be managed by former Manchester City boss, Mark Hughes. Hughes has already promised a more attractive brand of football will be played, unlike during the time of his predecessor which was much maligned that it was dull and boring to watch. Stoke should do better than last year, where they just staved off relegation by a few points.

Tottenham
Prediction: Champions League qualifier
It remains to be seen whether Tottenham will be able to retain the services of star player Gareth Bale, but regardless the Spurs have enough quality within their team to seriously push the bigger teams all the way. Andres Villas-Boas has recruited strongly during the off-season and the addition of Paulinho and Roberto Soldado will greatly help the Tottenham cause.

The moment @R9Soldado scored his first goal at White Hart Lane! The lads are out for the second half now. #THFC pic.twitter.com/GGwmSCKXQt

Key Player: Roberto Soldado
Despite just moving to the north London club, Roberto Soldado will carry much of Tottenham’s goal scoring threat after scoring 34 goals in 46 appearances for Valencia last season. He’s the striker Tottenham have been crying out for since Dimitar Berbatov left the club in 2008.

West Bromwich Albion
Prediction: Mid-table mediocrity
West Bromwich Albion is a team that seems to fly under the radar most of the time. After a great season under Steve Clarke last year, the Baggies will have their work cut out for them this year. Losing Romelu Lukaku back to Chelsea will hurt them, but West Brom fans should find a bit of solace in the recruitment of veteran striker Nicolas Anelka.

Key Player: Nicolas Anelka
The 34-year old Frenchman is out to show he can still cut with the big boys in the Premier League after a brief period in China, and an even shorter stint in Italy. West Brom will need Anelka to fire regularly if they are to repeat their form from last year.

Be sure to check upstart tomorrow for part two of our English Premier League team previews, as well as a glance at the first round of fixtures.

Paddy Naughtin is the sports editor of upstart, and a third-year Bachelor of Journalism student at La Trobe University. You can follow him on Twitter @PaddyNaughtin.