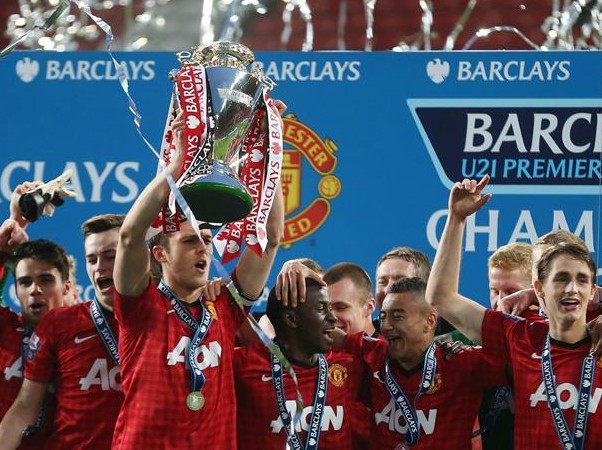 Signed for around £28 million at the beginning of the season, Chelsea’s Eden Hazard made an instant impact in the Premier League. His ability to fit seamlessly among Chelsea’s attacking midfield trio, alongside Juan Mata and Oscar, saw the triple-threat tear defences apart all season.

Hazard scored nine times in 34 league appearances, as well as laying on a further 11 assists for teammates. He played in a variety of positions across midfield, where his positional sense allowed him to wreak havoc in even the tiniest pockets of space.

At just 22 years of age, the Belgian will only get better. It’s a scary thought for opposition defences.

After already establishing himself as England’s first choice left-back, Everton’s Leighton Baines went to the next level over the course of the 2012/13 season. Almost impenetrable defensively, it’s hard to believe that Baines’s main strength is his ability to overlap and cause problems in the final third. This was highlighted by his delivery of 243 crosses throughout the season, the most of anyone in the Premier League.

Working with a tall and imposing forward line at Everton, Baines’s work as a set-piece specialist meant the Toffees were a threat from corners and free kicks all season. The 28-year-old played every league game throughout the season, scoring five goals himself, as well as setting up teammates on five more occasions.

With the departure of manager David Moyes over the off-season, Everton will have to work hard to keep Baines at Goodison Park next season.

A virtual unknown when he was signed under Michael Laudrup, Swansea’s Michu has proved to be one of the shrewdest investments of the season. Unbelievably, the Spaniard was signed for just £2 million in the off-season, yet went on to score 18 goals from 35 appearances in the league.

His tall and athletic stature meant he was difficult to deal with in the air, while his incredible poise when bearing down on goal meant he hardly wasted a chance all season.

Michu’s reputation in the Premier League has risen significantly, but football pundits are waiting on baited breath over whether he can replicate his successful first season next year.

If you’re looking for the most important player within a team all season, look no further than Aston Villa’s Christian Benteke. The 22-year-old’s tally of 19 goals from 34 appearances almost single-handedly kept Villa from relegation.

The Belgian signed for Aston Villa for £7 million at the beginning of the season, and he proved one of the Premier League’s best purchases. Crucially, Benteke scored 14 of his 19 goals in the second-half of the season, coming to the rescue right when Aston Villa was in need of saving.

Benteke’s value has skyrocketed, with the young striker now attracting the interest of Manchester City. However Villa will be hoping they can keep hold of their most prized asset.

There are players that you go to football matches purely to see, and Chelsea’s Juan Mata is one of those players. His positional play, his work-rate, his deceptive strength in possession and his ability to pick and execute a pass are all second-to-none in the competition.

After a successful first season in the Premier League, Mata added even more goals and assists to his initial tally throughout 2012/13. The Spaniard finished with 12 goals and 12 assists, topping the assist’s charts, in 35 appearances for the Blues this season.

At just 25, we’ll sure to be seeing Mata’s natural footballing abilities continue to flourish.

Thank you so much to all! Team mates and fans! Proud to be part of this club! Great night! #Playeroftheyearawards … say.ly/Mec5Q2p

In just one season, Tottenham’s Jan Vertonghen has established himself as one of the Premier League’s finest defenders. Signed for around £10 million in the summer, the commanding Belgian is a fantastic ball-playing centre back who is a perfect fit for the current style of modern football.

Vertonghen is versatile, as he can play anywhere in a back four, has a huge presence in the air, and is equally as adept at ground level. He has a wonderful positional sense and isn’t afraid to step out of his defensive line to thwart opposition attacks or to begin offensive plays.

The 26-year-old scored four times and managed three assists throughout the season, an impressive feat for someone who played predominantly at centre halve. Expect him to continue with his impressive form next season.

31-year-old midfielder Michael Carrick might not receive the same level of praise as the likes of Robin Van Persie or Wayne Rooney in Manchester United’s title success, yet he’s been just as pivotal in their premiership charge.

The deep-lying playmaker goes about his business in a quiet fashion, nullifying opposition attacks and creating offensive efforts through a combination of short and long passes. Carrick finished the season second in terms of completed passes, averaging an astonishing 66 completed passes per game.

Carrick’s ability to read the play is second-to-none across the Premier League, and he proved to be a vital cog in United’s midfield all season.

A blistering second-half of the season has seen many compare Tottenham winger Gareth Bale alongside the greatest living football players on the planet. The Spurs ace finished the season with 21 goals and four assists from 34 appearances, yet it was his second half of the year that earned him accolades such as the PFA Player of the Year and the FWA Player of the Year.

The 23-year-old incredibly scored 12 of his 21 goals in Tottenham’s final 14 games of the season, highlighting his importance to the Spurs side towards the conclusion of their 2012/13 campaign. These goals included stunning 30-yard efforts against West Ham and Sunderland.

Bale is only 23, and according to Tottenham is currently worth in excess of £60 million, however many around White Hart Lane believe it will be a hard job trying to keep the likes of Real Madrid from meeting that valuation this summer.

If you forget about his on-field indiscretions, such as earning a 10-game ban for biting Chelsea’s Branislav Ivanovic, Liverpool striker Luis Suarez is one of the Premier League’s greatest and most exciting talents. When not serving suspensions, the Uruguayan notched up an incredible 23 goals and five assists from just 33 appearances this season.

Suarez led the Golden Boot before being rubbed out for biting, and led the competition for shots on goal even despite missing the final month of Liverpool’s campaign. The Uruguayan also had the most successful dribbles throughout Europe’s top five leagues, highlighting his impeccable ability to weave past opposition defenders with ease.

If Liverpool can keep Suarez this summer, and get him mentally right for the future, they could have one of the league’s greats on their hands.

When quizzed on when he knew Manchester United had won the title, manager Alex Ferguson replied with, “August 17” – the day United completed the £24 million signing of Robin Van Persie. The ex-Arsenal striker scored an abundance of goals throughout the season, some of which, many have claimed, single-handedly won United their 20th Premier League crown.

The Dutchman struck 26 times in 38 appearances for the champions this season, as well as laying on an impressive eight assists. None of those goals were more impressive, or perhaps more crucial, than his stoppage-time winner against Manchester City in December. That goal put a gap between the Manchester rivals that City just couldn’t bridge for the remainder of the season. From that moment on, the title was United’s to lose.

Van Persie is a one chance, one goal-type player. He’s a lethal finisher who will punish defences for even the slightest mistake. At 29, he may be losing a yard of pace, but he’s still currently the Premier League’s best player.