NSW has been battling mouse plague since earlier this year 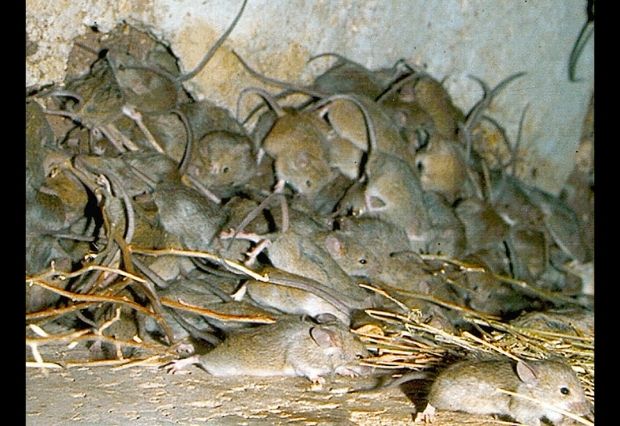 The NSW government has announced a $50 million package for an ongoing mouse plague that’s affecting farmers, small businesses and residents in rural NSW. The decision, announced yesterday morning on 2GB, follows after farmers gathered at State Parliament earlier this week asking for governmental support. This is being considered the most drastic mouse population increase for NSW since an infestation in 2011.

If you’ve missed this story so far, here’s everything you need to know about how they happen, whose been affected and what’s being done so far.

Why has this happened in NSW?

While mice usually stop breeding in spring, this year’s mild weather has allowed mice to continue breeding throughout summer causing parts of rural NSW to be blanketed by mouse plagues. The unusual heavy summer rainfall that hit the Eastern parts of Australia after the drought had created a moist environment for mouse breeding.

Even if grain’s in silos, mice can get to it. Like Tyler Jones discovered in Tullamore when cleaning out the auger and it started raining mice #mouseplague #mice #australia pic.twitter.com/mWOHNWAMPv

Who has been affected most?

NSW farmers are experiencing financial losses as the rodents destroy crops, stored hay and grains. The increase in mice populations has also caused businesses to fall short in baits and mouse traps. According to a survey conducted by NSW farmers, 94 percent of respondents had already baited for mice with 30 percent of them spending between $20,000 to $150,000. However, three-quarters of those respondents were unable to get the supplies.

The plagues have also been affecting human health as the rodents have also invaded silos, sheds and home as they seek warm shelters. In March, three people were hospitalised after being bitten by mice. It was reported that one of them was infected by a mouse-related illness called lymphocytic choriomeningitis (LCM). Cases of leptospirosis, a bacterial disease that can transfer from animals to humans, have also doubled in Queensland with experts saying the increase of these rodents to be the possible cause. Affected residents have said that mice and rats have destroyed their appliances too.

So, what’s the government trying to do?

As the situation escalates, the government has decided to act on the issue as they acknowledge the financial pressure it is having on farmers, business owners and residents. The mouse control program is intended to remove almost all of the farmers’ expenses and equip them with tools to build a mice-free fortress to protect their paddock. Minister for Agriculture Adam Marshall believes that free bait is “better than any rebates.”

“I’ve seen first-hand the impact these rodents are having … We’re making this as easy for farmers as we possibly can. No tedious rebates forms to fill out, just bring your grain to have the experts treat it free of charge,” he said.

The government has also lodged an emergency exemption with the Australian Pesticides and Veterinary Medicines Authority (APVMA) to approve the use of bromadiolone in NSW. “It is currently outlawed in Australia … the strongest mouse poison we can get anywhere on the face of the earth that will actually kill these things within 24 hours,” Marshall told 2GB. While no decision has been made, he’s confident that the request for the banned toxin will be approved and should be ready to distribute within a couple of weeks. The poison baits would be provided at between 8 to 10 facilities, free of charge.

The mouse management workshops have also been expanded to educate farmers on the best strategy to combat the infestation. Australia’s leading mouse expert, CSIRO researcher Steve Henry will lead the workshops. The workshop will be available up to 26 May 2021 in 16 locations. Bookings are essential and can be done online.

Photo: Mouse plague by CSIRO available HERE and used under a Creative Commons Attribution. The image has not been modified.