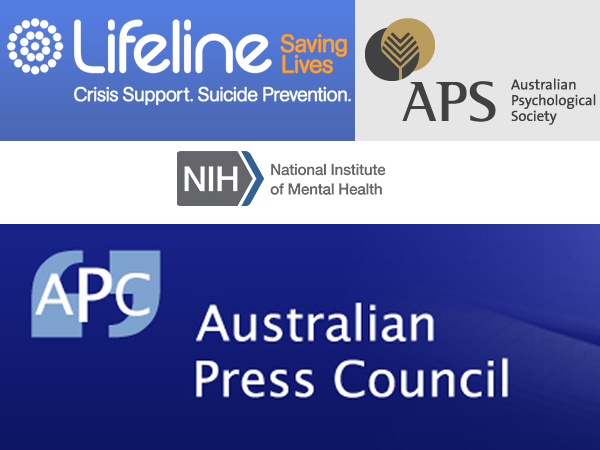 Australia ranks in the top 50 countries for suicide rates. Details released by the Australian Bureau of Statistics indicate that 2,273 people died via suicide in 2011, which equates to 6 people every day.

This means out of every 100,000 people, 10.2 will commit suicide. The prevalence of suicide in the community, combined with the tragic and often sensitive nature of the act, means that journalists need to approach reporting on suicides with extreme caution.

Balance is often the most important facet of covering suicides. Careful reporting that does not sensationalise the issue can be important in educating the public about mental health issues and how to spot warning signs in loved ones, but releasing specific details about the crime could raise awareness of previously unthought-of methods for suicide for at-risk members of the community. Reporting on suicides is as much about preventing further suicides and informing the community of the very real mental health issues surrounding suicides as it is about reporting on the individual incident.

The Recommendations for Reporting on Suicide, a project developed in partnership with several American institutions including the American Centre for Suicide Prevention, offers a comprehensive look at the type of language that should be used when reporting on suicides. It warns that “the risk of additional suicides increases when the story explicitly describes the suicide method, uses dramatic/graphic headlines or images and repeated/extensive coverage sensationalises or glamourises a death”.

This is backed up by the National Institute for Mental Health, who have found that “certain types” of reporting, which include “overly detailed” or “sensationalistic” stories can lead to increases in suicide numbers by vulnerable individuals, citing “over 50 research studies worldwide”. Some recommendations include avoiding “describing recent suicides as an “epidemic,” “skyrocketing,” or other strong terms”, and instead referring to clinical data to show a rise in suicide rates, and avoiding publishing photos of grieving family members or funeral proceedings.

The Australian Psychological Society warns against language like “successful attempt”, “failed attempt” and “commit” in reference to suicide. This is backed up by the National Institute for Mental Health, who suggest using terms like “died by suicide” or “killed himself/herself” instead. This avoids glamourising suicide, and removes any connotation or “good” or “bad” from the act.

Finally, the Royal Australian and New Zealand College of Psychiatrists support the risk management policy of, if avoidable, never describing the exact location or method of any suicide. The thinking behind these policies is not giving vulnerable individuals any further ideas or the ability to further their suicide plans.

In early 2009, Arthur Freeman threw his four-year-old daughter off the West Gate Bridge in crowded traffic. While suicides from the West Gate often go unreported, largely due to the aforementioned claim that it may give at-risk individuals “ideas” on how to commit suicide, the high-profile case was widely covered through print and television outlets. Unbeknownst to those same media outlets, their coverage may have led to the end of another young life. 17-year-old Allem Halkic was watching a news report about the Freeman case with his parents. He remarked to his father: “Is that right? Was it that easy for him to throw someone off the bridge?” Halkic would commit suicide, jumping off the West Gate less than a week later.

While Halkic’s suicide was eventually found to have been caused as a result of cyber-bullying, the fear of his death – or the Darcey Freeman case – being over-reported may have lead to something that Headspace, Australia’s youth mental health program, calls “suicide contagion”. As stated by the National Institute for Mental Health (NIMH), “suicide contagion occurs when one or more suicides are reported in a way that leads to another suicide”.

German and Japanese studies have been conducted previously on the idea of “suicide contagion” or “copycat suicides”. They found that after media reports on particular suicides were released, the incidences of people of similar race, age and gender committing suicide increased dramatically.

Dr. David Phillips, a sociologist from San Diego in America, also conducted a study in which it was found that after fictional story arcs, which contained images of suicide – for example, on soap operas – suicide rates among people who resembled the fictional characters, increased. This would demonstrate that the media, whether fictional or otherwise, plays a huge role in influencing the general public.

In its guidelines for reporting on suicides, the NIMH has stated that it wishes to see suicides reported on differently to crimes. Suicide is not a crime in Victoria, and the NIMH would like to see it treated as a public health issue instead of something to be stigmatised. All major organisations that issue suicide reporting guidelines agree that in addition to reporting on the suicide itself, it is important to raise awareness of mental health issues in society.

The NIMH encourages reporters to include a table of “warning signs” in their articles. In any story reporting on suicide, or even depression, it is commonplace for media outlets to end the story or piece with the number of a suicide helpline, such as Lifeline. In addition to this information, the NIMH encourages media outlets to avoid simplifying suicide by connecting it with a recent tragic event, such as a divorce or loss of a job. This oversimplification “leaves the public with a…misunderstanding of suicide.”

The Australian Press Council guidelines discuss the general principles of journalism, stating that unless the details of a suicide are in the public interest, they should not be reported on. As with any examples of trauma reporting, the guidelines stress that the subject of any interview has the right to terminate the interview at any time.

For more specific standards, the Press Council urges caution when reporting on suicides of prominent public figures or celebrities, as fans or peers of these people may be “especially vulnerable, because of age or mental health”. For members of the community, it is important to obtain consent from the family members of the deceased before reporting. These guidelines should be followed for reporting both the details of a suicide and the identity of the person who has died.

Responsibility, moderation, balance and sensitivity are the main things to consider when reporting on suicides. Careful reporting of suicide issues has the potential to lead those who are at risk or vulnerable to seek help. The death of a family member or a friend is a tragedy, and reporting on it can be delicate for a journalist. The sheer number of people who are affected means that discretion and caution are necessary. The other side of reporting on suicides is aiming to raise awareness of mental health issues in the community. This can be done by providing readers with the means to help themselves if they feel they are at risk of self-harm, and by lowering the stigma surrounding suicide.

Jordan Witte is a second year Bachelor of Journalism (Sport) student at LaTrobe University. You can follow him on Twitter: @wittsjw.