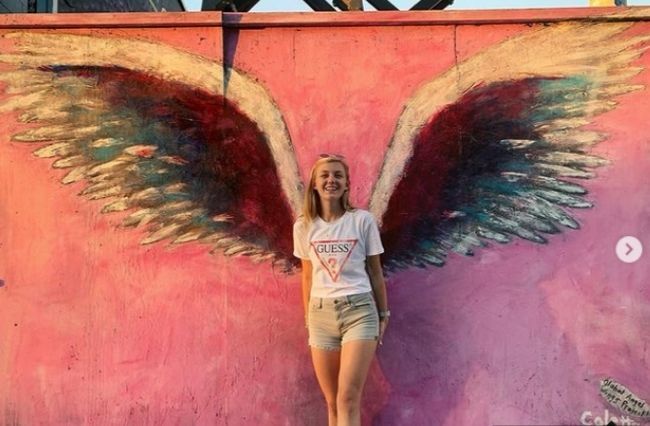 Gabrielle “Gabby” Petito disappeared in August and was reported missing on 11 September after a cross-country trip in the US with her boyfriend, Brian Laundrie. On 19 September, the FBI found human remains matching Petito’s description and deemed the cause of death as a homicide after a preliminary autopsy.

While Laundrie was the last person to be with Petito, the 23-year-old reportedly refused to disclose anything about his girlfriend’s disappearance to police or Petito’s family. Laundrie reportedly returned to the couple’s Florida home before going missing since 17 September. On 20 September, the FBI and Florida police got a search warrant, treating Laundrie’s residence as a crime scene. Police have been unable to locate him since. Authorities have issued an arrest warrant for Laundrie. His whereabouts are still unknown.

Petito’s parents said they haven’t heard from their daughter since last August and are appealing to Laundrie and the general public to provide any information about their daughter’s death. In the meantime, the case has been investigated by North Port officials in Florida and the FBI. Here is what we know so far about Petito.

Petito was a travel influencer

Petito originally born in Blue Point, New York and moved to North Port, Florida to live with Laundrie and his parents. In 2019, Petito documented her couple journeys on Instagram, YouTube and TikTok. On 2 July, both of them left Long Island to drive in a van from national parks and hot springs across the US. Her last Instagram post dated 25 August.

A witness called Utah police about the couple’s fight

A previous incident showed an alleged domestic disturbance, but authorities characterised the argument as a “mental/emotional break”. It follows a dispute between Petito and Laundrie on 12 August where officers in Moab, Utah responded to a witness who called the 9-1-1 emergency line claiming that the couple were fighting in front of the Moonflower Community Cooperative. The witness said they saw Petito slap Laundrie across the face during a fight over a phone, and then climb through the van’s window as if Laundrie had locked her out. When police arrived on site, they reported Petito “crying uncontrollably”.

Petito scratched Laundrie’s face and arms during their fight but as per the report: “They are in love and engaged to be married and desperately didn’t wish to see anyone charged with a crime.”

Despite the fact that Laundrie stated he felt safe and did not appear to have physically harmed Petito, the officer separated the couple leaving Laundrie in a hotel and left Petito to cool off for the night in the van, asking them “to take advantage of this time apart to relax their emotions and regain control of their anxiety”.

Laundrie gets back to Florida without Petito

Two weeks later, on 1 September, Laundrie returned to Florida without Petito. North Port investigators discovered the couple’s van at Laundrie parents’ property on 11 September, the day Petito’s parents reported her missing. Laundrie is now a person of interest in the case as he is the last person to have seen Petito alive.

Laundrie refused to speak with police

On September 15, North Port police said Laundrie had not “made himself available to be interviewed by investigators” nor “provided any helpful details”.

“As a father, I can imagine the pain and suffering Gabby’s family is going through,” North Port police chief Todd Garrison said in the statement. “We are pleading with anyone, including Brian, to share information with us on her whereabouts in the past few weeks. The lack of information from Brian is hindering this investigation. The answers will eventually come out.”

Police are questioning Laundrie’s attorney, Steven Bertolino. In a statement with CBS2, Bertolino said: “In my experience, intimate partners are often the first person law enforcement focuses their attention on in cases like this and the warning that “any statement made will be used against you” is true, regardless of whether my client had anything to do with Ms. Petito’s disappearance. As such, on the advice of counsel, Mr. Laundrie is not speaking on this matter.” Both he and his family, Bertolino added, “will continue to remain silent on the advice of counsel”.

Chief Garrison publicly adressed Bertolino, telling him that “two people left on a road trip and one person returned”. Petito’s family claims their daughter hasn’t been seen since 24 August, when she was hiking in Wyoming’s Grand Teton National Park and video-chatting with her mother. Petito’s mother claims they texted for a few days, but didn’t hear of Gabby since. “They are frantically searching for answers and information in their daughter’s disappearance while Brian sits in the comfort of his home,” Chief Garrison said.

The FBI discovered a body that matched Petito’s description

The FBI conducted a press conference on Sunday 19 September to announce that they had discovered what they believe are Petito’s remains in the Bridger-Teton National Forest. During the press conference, an FBI spokesperson said: “On behalf of the FBI personnel and our partners, I would like to extend sincere and heartfelt condolences to Gabby’s family.” The cause of death has yet to be determined. Laundrie, a “person of interest” according to the police, has yet to be found. Laundrie’s parents were removed from the house by the FBI and other authorities who were conducting a search.

An arrest warrant for Laundrie

Laundrie is accused of using “unauthorised access devices” and has been missing since 17 September. On 30 August and 1 September, he used a Capital One debit card that might have belonged to Petito. “It is my understanding that the arrest warrant for Brian Laundrie is related to activities occurring after the death of Gabby Petito and not related to her actual demise,” Steven Bertolino told Insider. “The FBI is focusing on locating Brian and when that occurs the specifics of the charges covered under the indictment will be addressed in the proper forum.”

Laundrie is still regarded as a person of interest by the FBI.