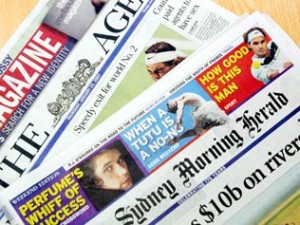 Fairfax used to have lots of advertisers as paying customers – but no longer. Bottom line is Fairfax is broke and dying before our very eyes. They need a viable business model quickly. The old model of selling eyeballs to advertisers isn’t going to sustain Fairfax much longer.

Fairfax has announced that their metro papers will move from broadsheet format to tabloid size next year. It isn’t clear to me, however, that the size of the paper is the problem. The product itself is the issue – not enough people want to read The Age or Sydney Morning Herald. True – this is a problem all media organisations face and the industry as a whole will be radically restructured over the next decade.

Fairfax, however, doesn’t have a decade. The organisation as it currently stands has run out of time. As Business Spectator columnist Stephen Bartholomeusz argued a few weeks ago, Fairfax revenues are falling faster than it can cut costs.

Those who fear a Gina Rinehart takeover of Fairfax are imagining a future without a Fairfax at all. In practice, she has become their single largest paying customer.

A lot of ink and pixels are going to be wasted on a Rinehart takeover of Fairfax. People will talk about the end of democracy, a lack of diversity, perhaps even the collapse of civilisation as we know it.

Media patrons are not unknown or even unusual. As indicated the ABC has the federal government, The Conversation has a consortium of universities, Crikey has Eric Beecher, the Global Mail has Graeme Wood, The Monthly has Morrie Schwartz. This pattern of ownership is hardly surprising. In a 2003 Journal of Law and Economics paper looking at media ownership across 97 countries, Harvard economist Andrei Shleifer and co-authors found two dominant modes of media ownership – government and concentrated private owners.

The apparent concern, however, is that Gina Rinehart is said to be somewhat conservative and the Fairfax papers – especially The Age – are considered to be quite progressive.

Specifically it has been reported that Gina Rinehart has refused to guarantee “editorial independence” at Fairfax. Who can blame her? It isn’t like that “editorial independence” has produced an excellent product commanding a price premium. Fairfax needs to be restructured beyond simply changing the size of the paper. One of the benefits of a takeover is that inefficient and ineffective work practices get abolished.

But some might argue that Gina Rinehart will use Fairfax to push her own views and agenda – as opposed to the current editorial stance. How much of a problem is this really? It doesn’t matter who owns the media – if they cannot attract other paying customers the media patron will lose money and eventually will sell out or shut down.

The old Fairfax is gone. Whether a new Fairfax will rise out of the ashes I cannot say. But without a patron it certainly will not. There is no guarantee that a Rinehart-controlled Fairfax will be successful, but in the first instance she will give it a red hot go. This takeover buys breathing space that will allow the company to restructure and gives Fairfax the best chance of survival.

Sinclair Davidson has received funding from the Australian Research Council. He is a senior fellow with the Institute of Public Affairs. He is a subscriber to the Australian Financial Review and has published a number of op-eds in Fairfax newspapers.

This article was originally published at The Conversation.
Read the original article.