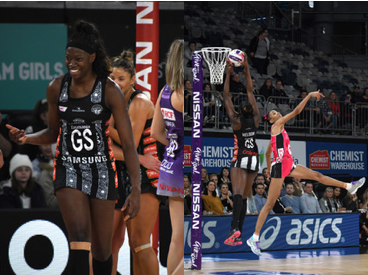 To say that the towering 20-year-old burst onto the netball scene is a colossal understatement. In fact, it’s likely that Shimona Nelson has played less games of netball in her life than the screaming 8-year-olds that pour into Melbourne Arena on a Saturday afternoon.

Nelson’s rise to leading Suncorp Super Netball’s Collingwood Magpies is as unorthodox as it is awe-inspiring.

At age 15 the self-proclaimed “nerd” took up basketball for the chance to earn a sporting scholarship to university – a luxury her family struggled to afford.

“Growing up in Jamaica was kind of difficult for me in some cases because not all the time my dad was able to provide so it was just my mum alone,” Nelson told upstart.

“But whenever he did provide it was like a big [deal] for us so any little that we had we made it a huge difference. So, we (stretched) it until we could last as long as possible.”

Eventually, Nelson received a sporting scholarship to study psychology at the University of the West Indies and this is where she experienced netball for the first time.

She dived into the sport head-first and played a number of games in the inter-college competition before being selected to play for Jamaica.

Thinking back to her first game for her country, Nelson squirmed with embarrassment and laughed at her fish-out-of-water experience.

“I had to use my common sense! I was trying to picture a basketball but, in this case, don’t dribble!” she said.

Nelson ensured her teammates were unaware of her inexperience in the game and she adopted a fake it ‘til you make it attitude.

“I didn’t really show that weak side. I was like ‘I can do it; I can do it’ but deep down I was struggling! I struggled inside but I showed the effort that I want to learn, I want to get it right,” Nelson said.

Despite her rawness to the game, Nelson caught the eye of then Adelaide Thunderbirds coach Dan Ryan and was contracted as a replacement player for the 2018 season.

When asked about the differences between her home country and Australia, Nelson extended her long, slender arms outwards.

“There’s a wide world [of difference], my wingspan won’t say … it’s a huge difference to Jamaica and here,” Nelson said.

“It’s a huge margin to be able to live in a first-world country compared to a third world country; you have so much opportunity.”

After a winless season with the Thunderbirds, Nelson was offered a two-year contract with the Magpies.

Just days before the interview, the Magpies played a 57-all thriller against the Queensland Firebirds where her team clawed back an eight-goal deficit after half time.

Nelson was still reeling from the match: The excitement of playing an intense, frantic game in front of thousands left lasting effects of exuberance and disbelief, a moment where she had to pinch herself.

“Right before the game and just coming back home it’s just like wow, is this really me or am I actually here in Australia … You’re still in shock, you’re trying to see if you’re still in the present mode or you’re dreaming or something,” Nelson said.

While Nelson seems like a larger than life character who danced in the Holden Centre to get a laugh out of her teammates as they relaxed in the hot tub, she considers herself a homebody.

She said finding a balance between work and study while living in a foreign country is “quite easy” as her life as a student athlete in Jamaica prepared her for the move overseas.

“While I was there, I played netball. I did basketball and did track and field there, so it was a lot of time-management for me to study as well and do my courses before I go to and from training,” Nelson said.

Left photo: Nelson celebrates the Magpies’ first win over the Queensland Firebirds since their draw in Round 2. Photo: Netball Scoop/Aliesha Vicars