Those close to Pat Kerr reflect on draft night 2016 and the history his family has with the Carlton F.C. 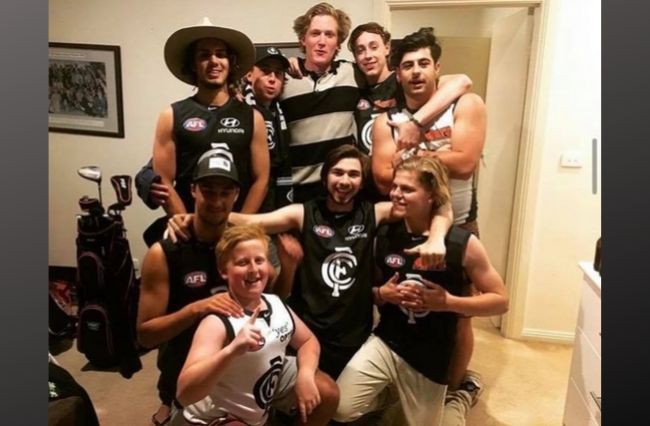 On AFL Draft night 2016, Pat Kerr took himself away himself from his family and sat nervously upstairs to watch the event unfold. Suspense built throughout the house as Kerr’s name got passed by several clubs. Finally, he was announced as pick 65 to the Carlton football club.

Kerr is a name that’s forged within the walls of the Carlton football club. For decades the name has been linked to the navy blues, with generations representing this club both on and off the field.

Once drafted, the idea of becoming a Carlton player took weeks to sink in for Pat. More so recently as the young Blue found himself sidelined for the rest of the season with a shoulder injury. After a troubled 2019 season, Kerr was ultimately de-listed from the club he called home for three years. But even though it was a short tenure at Carlton, Kerr fulfilled the Kerr family tradition with a three years-stint at a club that means so much to him and his family.

Pat Kerr’s grandfather, Laurie, was a 149-game player at Carlton and one of the club’s first Hall of Fame inductees. His grandmother, Vivienne, remains the club’s No. 1 female ticket holder. Together, they had nine children — three of which went on to represent the Blues.

There’s Kerr’s father, Stephen, who played Under 19s footy at Carlton. His uncle, Peter, played 39 senior games for the club. His other uncle, Mark, made his way through the reserves team. It’s fair to say the connection is strong.

But Kerr is Laurie’s only grandchild, making Pat’s recruitment to Carlton all the more special. An entry in the Blueseum says there is only three words  to sum up Laurie Kerr as a footballer: speed, aggression and courage. It describes him as a “blisteringly-quick winger, centreman or half-forward flanker”, and a star player in a bleak period for the Blues from 1950-1959.

A gifted junior player, Pat Kerr stands at 193cm. The centre half forward is renowned for his endurance, marking, and elite set shot ability. According to Steve Kerr (Pat’s father.) his son hasn’t inherited any of his grandfather’s football traits. Or maybe it was an excuse to have a sly dig at his son

“Well, the old man was quick and agile. And well it’s safe to say Pat is neither of those,” Steve Kerr told upstart.

“Ever since Pat has been drafted, people have been trying to draw correlations between Lawrie and Pat’s playing style,” Steve Kerr said. ”I kind of like it that they aren’t similar. Pat’s a unique kid.”

Despite his teasing, Steve Kerr says the family was “stoked” to see Pat join the Blues.

Grandmother Vivienne Kerr has been Carlton’s number one female ticket holder for decades.  The passion and love Mrs Kerr has for Carlton and her grandson was clear on that draft night back 2016, when, after a nervous wait, it was announced that Patrick James Kerr would join Carlton.

“As soon as Viv heard, she jumped the highest out of the lot,” Steve Kerr told upstart.

“That night was a real roller coaster, it was a great celebration, and Viv didn’t take the smile off her face once,” he said.

As a young kid destined for big things in his final years of schooling, in 2015 Pat Kerr had to deal with something that was unimaginable for someone at such a young age. In the prime of his junior career, he injured his shoulder, requiring a complete shoulder reconstruction. This meant a season-long stint on the sideline. Just five months post-operation Kerr devoted most of his days to recovery, whether that was at the gym or at the physio.

While focussing on his rehab, Kerr and his family were hit with the devastating death of Auntie Penny Bailey, who at the age of 59 was murdered by her son in Melbourne’s east in October 2015. According to Kerr’s father this tragedy  had a profound impact on his son.

“I could tell that this really shook Pat. A lot of what he does on the field is in honour of his auntie,” Mr Kerr told upstart.

Kerr’s schoolboy coach and mentor Paul O’Brien spoke about his professionalism after this family tragedy.

“Pat is a ripping kid, that period of his life was hard for everyone involved, I couldn’t imagine what he was going through,” O’Brien told upstart.

“I announced him as captain in his final year of schooling. The way he responded through that adversity ensured that I knew he was the right man to take the school forward,” he said.

Kerr captained the senior side in his final year, kicking 34 goals in nine games. This was a man on a mission. For Paul O’Brien, it was a pleasure to be a part of.

“You just knew that Kerr wanted to end up at Carlton, the storyline was too strong for it not to happen. You knew that the footy gods would make this happen. ”

The adversities that Kerr has experienced have all contributed to the young blue he was and always will be. And although his time at the Blues has come to an end, the cheerful look on Vivienne Kerr’s face on the night he was chosen by Carlton will be an important chapter in Kerr’s story.

Hugh Fitzpatrick is a third year Bachelor of Media and Communications (Sports Journalism) student at La Trobe University. You can follow him on Twitter @HughFitzpatrick17.