Yesterday the cricketing world said goodbye to a retiring champion of the game.

Ricky Thomas ‘Punter’ Ponting will be remembered as a selfless, confident player; one who scored over 40 centuries and 13,300 runs for Australia at test level.  Add to that almost 14,000 runs and 30 centuries in one-day internationals. 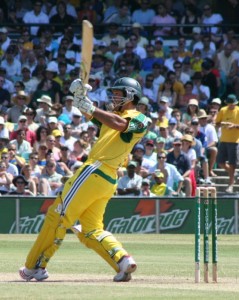 His final hurrah will be at the WACA, starting today, for the third test against South Africa.  His record feats are etched not only in the record books, but also in the minds of every cricket fan.  The cricketing great certainly has put his mark on the game forever.

He will also become Australia’s most capped test player along with Steve Waugh on 168 matches (he also played 375 one-day internationals) and recorded the most wins as an Australian captain, with a total of 48.

From a young age Ponting was touted as an excellent cricketer.  At the age of just 11, Ponting scored four centuries inside of a week during an under-13 tournament in Tasmania.  He was in the same form for an under-16 competition shortly after.  It was this form that sparked the beginning of a magical career.

An avid footballer at heart, Ponting also played for North Launceston up to the age of 14, but his career was cut short after he broke the humerus in his right arm.  He never played football again.

Punter’s career continued to blossom, and just four weeks short of his 18th birthday, he became the youngest ever player to take the field for Tasmania in a Sheffield Shield match in November 1992, beating the previous record held by David Boon.

His first Sheffield Shield century came in just his fourth match, resisting the likes of Australian legendary fast bowler Glenn McGrath.  His career rose in stature from then on.

It took Ponting the better part of five years to really stamp his name into the Australian side in both test and one-day format, debuting in both forms in 1995.  Small innings, low-scoring series and off-field problems, including alcohol issues, came his way before he began to hold down a regular spot in the team.

But Once he got going, his career soared.  From his one day international debut in 1995 and his first test century in 1997 against England,  Punter began to establish his presence as a genuine top batsman for Australia.

Ponting really turned it on during the 2003 World Cup in South Africa, where Australia went undefeated.  His 140 not out against India in the final was both brutal and beautiful.

He combined with Damien Martyn for an excellent 88 not out in a 234-run partnership.  It was the first time I was really able to see Ricky Ponting in full flight, and at an age I could appreciate it as well.

Australian cricket was still in its golden era at the time, and so was Ponting.  He was majestic at the crease; hooking, pulling, driving,you name it.  His footwork was sublime, and boy, could he score.

If I had to pick my all-time favourite moment of Ponting’s career, it would be his twin hundreds at the SCG, which he celebrated in his 100th test in January of 2006.

It was a master class of stroke play, timing, and most of all, Ponting at the top of his game.  He took apart the South African bowling attack, making them look second-rate.

Unfortunately, a recent lean run began to cast doubts over Ponting’s career.  I give all credit to him on going out on his own terms, rather than being unceremoniously dropped by selectors.

Ponting’s career has not been all glitz and glamour, however.  Three Ashes series losses and a spate of form drops and injuries during his career eventually started to take its toll on him.

But he persevered and was duly rewarded with a beautiful century, then backed it up with a double century against England last summer.

Ponting did have another shining light on the cricket field – that of his fielding.  He was like a cat, whether it be at slips, point, or mid-wicket; pouncing on anything that came his way.

When he took a shot at the stumps, he rarely missed.  Not only did he enjoy celebrating wickets with enthusiasm, but he also enjoyed being quite a character in the field – chewing gum at the same time.

His handing over of the captaincy to Michael Clarke last year was unselfish and well-respected.

‘Punter’ is a true legend of the game and his highlights far outweigh the negatives.  He has been part of an incredible Australian team and part of shaping the way for the next generation of cricketers.

Davis Harrigan is a first year Bachelor of Journalism (Sport) student at La Trobe University.  You can follow him on Twitter: @Davis_Harr or read his blog here.