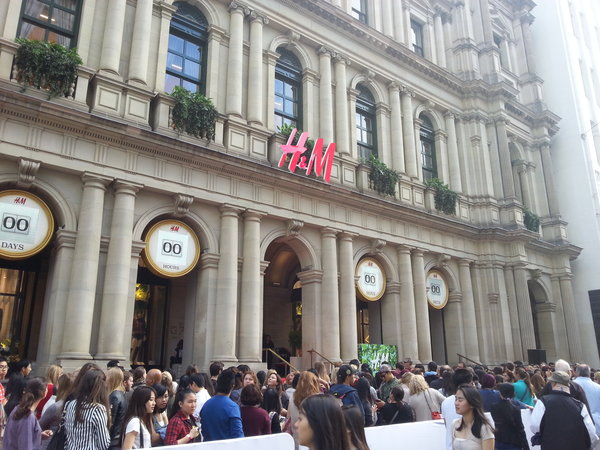 Locally based fashion giants Myer and David Jones were seemingly forgotten about on Saturday morning, as eager shoppers were ready to snatch a bargain from the new kid in town – European brand H&M.

The Swedish powerhouse opened its brand new flagship store right in the heart of Melbourne, in the iconic three-story GPO building on the corner of Bourke Street, just doors down from its competition.

The build up from the media helped H&M draw about 15,000 keen shoppers to the stores first day of trade, with a line stretching around the block. Once inside, shoppers were able to check out what H&M are known around the world for: fast fashion.

Fast fashion is a term that basically describes a shorter period between designs being on the catwalk and in store ready for purchase. But where does this fit into our economy and what kind of potential does it have to succeed down under?

La Trobe University Associate Professor Clare D’Souza, who has worked largely within the European textile and fashion industry, believes that with H&M’s highly competitive pricing, local retailers like David Jones and even K-Mart will feel the pressure.

“In Europe they are big time,” Professor D’Souza tells upstart.

“And because H&M is so popular in Europe, anything new and successful we will want to try here in Australia.”

Professor D’Souza thinks that H&M will attempt to segment our local market by finding a niche. Finding this niche may be easier than first thought with D’Souza claiming that “fashions in Australia have not yet caught up with the rest of the world”.

“I find we are really laid back in our fashions and our styles. It’s nice sometimes because we have a very casual outlook, but if you go to Europe any time of the day they really dress up,” says Professor D’Souza.

The fact that H&M are sporting European inspired fast fashion, quality clothes and affordable prices, could see them fall somewhere in between Kmart and David Jones. However the effect of this won’t be seen for some time.

“I don’t know how they compete at the moment because we are seeing a huge influx in cheaper clothes that are coming in from overseas,” Professor D’Souza explains.

“You can just go online and buy clothes from all over the world.

“Some people would buy the H&M brand but I think it will take the market two or three years to open up, like what happened with Zara.”

Professor D’Souza believes that if H&M wants to continue its pursuit down under by rolling out more stores in the near term, they will need to improve on a couple of things; distribution and marketing.

“In marketing one of your fundamental tools is distribution. You either distribute your products online or make them available everywhere, like how there is a Kmart and Target in every suburb,” she says.

“Most suburbs already have retailers in them, so shoppers would only go to H&M if they wanted something more unique? But if you lived in somewhere like Werribee there would be no reason for me to head in just for something simple, like a plain t-shirt.”

Acquiring a segment of the market will mean it’s essential for H&M to hold onto the people they’ve already attracted. This means that they potentially need to offer the consumer something unique and their support for sustainability could be that factor.

“There should be some returns policy or recycling policy where you send it back or to a third world country, so someone else can use it,” says Professor D’Souza.

“That would be a good way of showing them they are sustainable.”