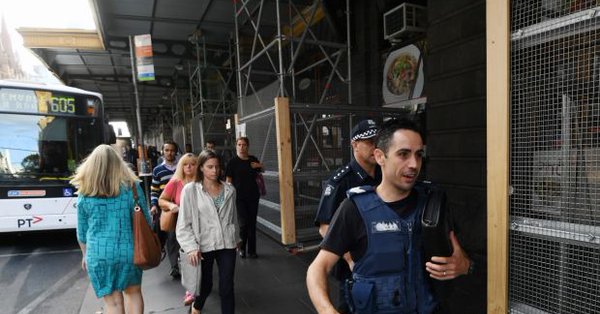 Flinders Street Station has been declared safe by Victorian Police after they shut down two platforms to conduct security checks this morning.

The security scare occurred when passengers called police after seeing a man looking at pictures of a deceased body on his phone on the 6:13 in-bound Frankston train.

Police were called in at 8am and boarded the train between Richmond and Flinders Street.

Police have since interviewed and released the man.

Police Chief Commissioner Graham Ashton told The Age “We had a report, I think from the events last night and the hyper-vigilance in the community … we had a report of someone who looking at deceased bodies on a mobile phone.”

“It turned out be nothing in it”, he said.

At 9am police released a tweet declaring the station safe again.

Police have completed a safety check at Flinders Street Station and the area has been deemed safe.

Victorian Police Minister Lisa Neville told the ABC that everything is clear and Flinders Street is operating as normal.

A man plowed a car into pedestrians on Westminster Bridge before stabbing a police officer to death.

Five people were killed, including the assailant, and about 40 more injured in what British Prime Minister Theresa May has called a sick, depraved terrorist attack.

Surrounding buildings were in lock-down as police shot the attacker within the perimeter of Parliament, and he later died in hospital.

Police found an eight-inch knife on him.

Counter-terror officer Mark Rowley told journalists that they suspect the attack is Islamist-related terrorism and that they believe they know the identity of the assailant.

The attack is eerily reminiscent of the Bourke Street attack in Melbourne on January 20, in which assailant Dimitrious Gargasoulas plowed a car into pedestrians in Bourke Street Mall.

Six people died and Gargasoulas was shot and taken into custody.

He is facing five counts of murder and is expected to be charged with a sixth.