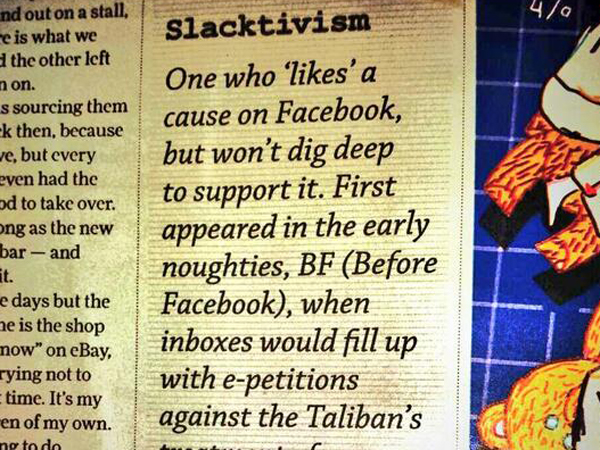 Over the last week, I’m sure everyone with a Facebook and Twitter account has been bombarded with self-taken photos of bare-faced women (and the occasional man).

The reason for the sudden influx of ‘selfies’? They have been brought together by a simple hashtag know as #nomakeupselfie.

This hashtag is being used to raise awareness for cancer. Since its birth, more than £8 million has been donated to Cancer Research UK, with donations being made to other countries’ cancer research foundations including Ireland and even Australia.

This is undoubtedly an astounding accomplishment, and it has all been created through social media. However, does the end justify the means?

Firstly, let’s clarify that this ‘campaign’ did not originate from Cancer Research UK. The trend was unintentionally initiated by US author Laura Lippman, as she tweeted a photo of herself without makeup in support of actress Kim Novak, who was criticised for her plastic surgery at this year’s Academy Awards.

In the span of a week, it somehow got linked to cancer.

Far too many of these ‘selfies’ have been a tool for social media junkies to draw much wanted attention to themselves, showcasing their ‘support’ for cancer research.

Or did they just forget to donate when deciding on a filter?

This raises the issue of a thing called ‘slacktivism’.

This modern term is a combination of the words ‘slacker’ and ‘activism’, to emotively describe the not so fine art of offering one’s support for a cause with minimal effort, thus having no practical effect other than to make themselves feel good about their ‘contributions’.

With the rise in social media, society has been flawed with the notion that ‘likes’ on Facebook and Instagram, and ‘retweets’ on Twitter actually have an impact on activism.

It may have an impact on one’s psyche, but once the laptop is closed and the phone has been put down, what has the excessive thumb-pressing achieved?

Yes, social media grabs more attention than any one real life event could, but it does no good when one’s audience consists of those who are hiding safely behind their phones and computers, waiting to show off their ‘support’.

Actually going out in real life (or ‘irl’ if you prefer), and actively making an effort to contribute to something, such as a charity run, means so much more than any form of slacktivism.

We know that genuine activism works, so why not pursue it?

There is no doubt that social media is a powerful tool that will continue influencing people’s lives, as well as human culture. It has the potential to contribute to activism as we know it to be; however, it’s how we use it that makes the difference.

So, here are some ways to turn today’s slacktivists into activists through the use of social media:

Let them take their selfies
Let’s face it, everyone loves a good selfie. Why not start our own trend where we take selfies of us actually contributing to real life activism? So many people want to brag about how much they care about an issue, let’s show off what we’re doing to make an impact!

Check-in!
We’ve all used the Check-in function on Facebook to let everyone know where we are on a Saturday night, even though we may not know ourselves after several drinks. Let’s use it to advocate activism by checking in to some real life events, encouraging others to join us!

Hashtags get to more people, but regular tags get to the right people!

When on Twitter, be bold and tweet people directly. Why waste your time seeking the attention of people who may just ‘favourite’ your tweet when you can contact someone who will want to reply, know more and get involved? Remember, it’s called ‘social media’ for a reason; use your social skills as you would in real life.

Take it offline
When behind a computer, the only way that people can truly contribute to a cause (that doesn’t fall under slacktivism) is to donate money. Attending real-life events allows one to offer their support in more ways, that would be easier on our wallets.

Encourage others to join you! Don’t send them an invite to an event via Facebook; that’s so impersonal. Talk to them directly and get them involved. That’s real activism!