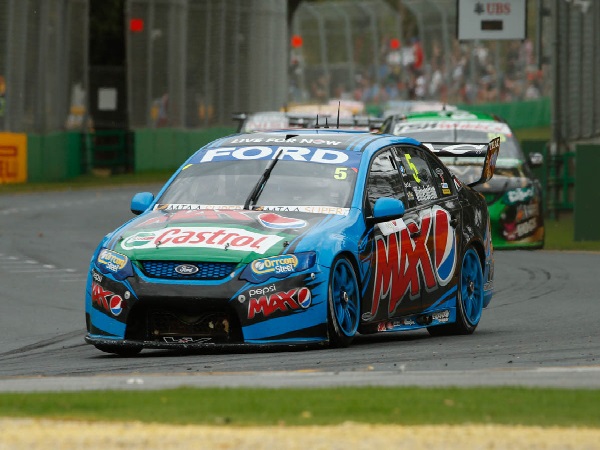 There isn’t a driver loved more by Ford fans than Mark ‘Frosty’ Winterbottom.

In fact at the end of the 2013 V8 Supercar season, Winterbottom became one of the most loved Ford drivers globally, after what was a big year for the Ford Performance Racing speedster.

His winning personality resonates with not just Ford fans, but fans of all the other manufacturers of the motorsport and when it comes to driving his Pepsi Max Ford, he is as aggressive as anyone.

The most recent round at the Barbagallo Raceway in Perth saw Winterbottom’s teammate for the Pepsi Max crew Chaz Mostert win his very first race for the FPR team, but it was still Winterbottom who placed third, and that was the bigger story.

Although Winterbottom didn’t win any of the races at Barbagallo; a fourth, second and third placing in each race saw him gain enough points to move to the top of the championship table.

This comes as welcome news to all the ‘Frosty’-loving Ford fans who if you ask, all of them say the same thing: he must win a championship.

Even fourth-placed Jamie Whincup poses as a threat to Winterbottom because he is a proven elite driver and has won the championship five times since 2008.

But for once, it’s Winterbottom sitting on top after six rounds of the season, looking down on the other drivers, and 2014 could very well be considered his year.

He has continuously been a consistent driver for Ford and has slowly but surely been crossing off the achievements on his career bucket list.

Last year was the highlight of his 14-year-old career when he won his very first Bathurst title and accomplished a lifelong dream by doing so.

Winterbottom also won his very first Barry Sheene medal in 2012, an honour many other championship winners have achieved in their time. The Barry Sheene medal is awarded to the driver who shows the most outstanding leadership and sportsmanship throughout the racing season.

Combine these accolades with 23 race wins, 77 podium finishes and 27 pole position starts. These stats show that Winterbottom has all the credentials of a good driver, but he needs to become a great one by winning that elusive championship.

But the question remains if Winterbottom has proved himself as a capable driver, why hasn’t he tasted championship victory yet?

Perhaps it’s due to a living in the recent shadow of Jamie Whincup and Craig Lowndes who achieved so much in their 888 Commodore? Or perhaps it’s just a string of bad luck.

Even lesser-known names who have never dominated the championship points race like Russell Ingall and James Courtney have both managed to fight through to win a championship. Ingall won his first and only championship in 2005 and Courtney in 2010.

If Winterbottom wants to solidify his name in V8 Supercars folklore he must take the next step in 2014.

With the number of other manufactures clogging the V8 supercars grid in recent seasons, the blue oval needs this win for not only its fans, but its brand.

With such a good foothold on the competition at the moment he can’t afford to let it slip, he must stay focused and on task because a championship win is vital to his legacy.