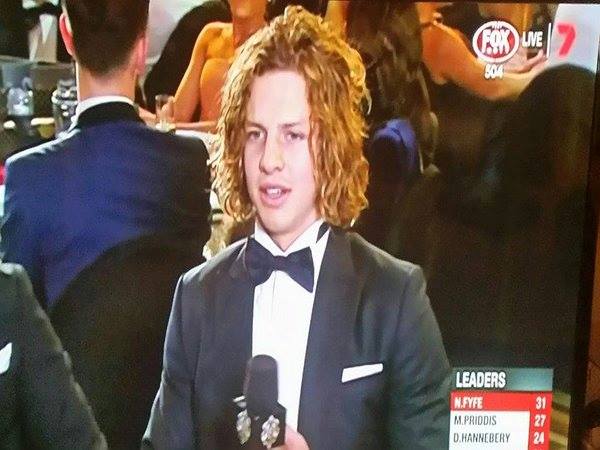 Fyfe’s incredible first half of the year allowed him to poll enough votes to ward off a late challenge from West Coast’s Matt Priddis.

The 2015 Brownlow Medalist, Nat Fyfe, stepped onto the red carpet with a walking stick after playing with a fractured leg on the weekend, and memes followed.

Fyfe said he doesn’t regret his decision to play injured against Hawthorn on Friday night.

“Once you declare yourself fit to play, you have an obligation to play,” he said to Bruce McAvaney.

“I live and die the Dockers, and I want to do anything I can to help.”  Fyfe has been favourite to win the award for months.

He was followed by Priddis, Patrick Dangerfield and Sam Mitchell in the betting odds. Priddis watched the Brownlow proceedings from Perth, as West Coast aren’t flying into Melbourne until later in the week.

Priddis was at Crown last year to receive his medal, however the Eagles finished outside the top eight. Although Patrick Dangerfield announced this week he’d be leaving Adelaide, the Crows still welcomed him at their table.

No sign of the bread roll and Patty’s not happy #brownlow but our table is all ready for the votes 3⃣2⃣1⃣ pic.twitter.com/QmAH6dpg38 — Adelaide Crows (@Adelaide_FC) September 28, 2015

Dangerfield entered the count as a potential winner, after winning Adelaide’s Best and Fairest for consistently starring in the midfield, particularly in the second half of the year.

While he was his club’s highest vote receiver, Dangerfield didn’t get into the top five at the end of the night. No favourites polled in the opening round of votes.

Priddis, Dangerfield and Goldstein all earned their first votes in round 2. After calling the first round’s votes too quickly, AFL’s Chief Executive Officer Gil McLaughlin took advice from Twitter users and took on a more Demetriou-esque approach as voting got tighter.

Well the good news is, Gil is going to have this thing wrapped up by 9:00… #Brownlow — Sportsbet.com.au (@sportsbetcomau) September 28, 2015

Priddis came second, polling 28 votes. His Eagles teammate, Andrew Gaff, ruled out Priddis as a back to back Brownlow Medalist, saying the depth of the Eagles lineup would result in players stealing votes off each other. But Priddis was still a chance until the second last round. After polling no votes, it was clear Fyfe would be the sole winner of the medal.

After round 7, Fyfe had already polled 14 votes. He led strongly and polled in all of the rounds he was expected to.

With 17 votes after round 8, Fyfe broke Brownlow history with the highest number of votes following this round. The previous record holder before him was dual medalist, Chris Judd, who attended the count this year for the last time as a player.

Judd still holds another remarkable record. He finishes his career polling the third most votes in Brownlow history.

With Fyfe polling this highly, after 10 rounds, the Brownlow leaderboard numbers were at record highs. Hannebery, Priddis and Mitchell were all placed as serious medal contenders, but still trailed behind Fyfe. All four leaders were unsurprisingly included in this year’s All Australian side.

The conversation all night was whether or not Fyfe had enough votes to make up for missing four rounds of footy due to injury. After round 13, Fyfe had 26 votes – the same number Priddis won with last year. A win from Fyfe began to look unlikely as Priddis started to play catch-up, and the potential games for the Docker to poll in began to dry up.

Fyfe didn’t rate his chances when interviewed after round 15 votes were read out. “I think I’m dusted from here,” he said to Cameron Ling.

However, Fyfe continued to hold the lead at 29 votes. He scored two votes in round 17, which began to make him more of a certainty to win Charlie. No one in Brownlow Medal history has scored 31 votes and not gone on to win.

Fyfe’s last shot to poll came in round 20. This gave Priddis the chance to catch up, but his continuous polling of two votes in the final rounds was not enough to get him over the line.

Fyfe didn’t score in the last game he was predicated to score in, leaving the door open for Priddis to possibly tie with the Docker.

But Priddis had to earn maximum votes in two of the last three games to be eligible to draw for the Brownlow Medal with Fyfe. Many began speculating that a draw was on the cards.

Ultimately, the star midfielder put his win down to the talent of his club and his coach. Fyfe’s win makes him the first player in 50 years to win the Brownlow despite missing four games.