‘In the media things can pop up at random times,’ says Fox Sports European and English Premier League (EPL) football correspondent Daniel Garb from his home in London. ‘I was quite fortunate in that regard.’

Garb has always been interested in working overseas and a combination of hard work, dedication and the creation of his own ‘lucky breaks’ saw his move to the UK happen quicker than he ever expected. 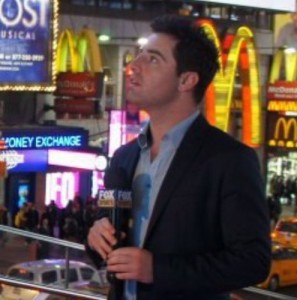 Garb was offered the job at Fox Sports after hearing that long-time friend and former correspondent David Davutovic had returned to Australia to accept a job at The Herald Sun.

He considers it a bit of a ‘lucky break’, but as our conversation progresses it becomes apparent that Garb’s work ethic and determination were the driving factors behind his move across the world, rather than a simple stroke of luck.

Garb’s profile within Australia is on the rise, with television appearances stretching from match day reports on the English Premier League to high-profile interviews with the likes of Alessandro Del Piero and Rafael Benitez.

However, a job within the media was never a certainty for Garb.

After studying commerce at university, it was part-time jobs within the media industry that enticed him into journalism.

‘There was never a direct line into the media,’ Garb admits.

‘It was more down to a love for the media that I got from immersing myself in it during my university days.’

After completing his commerce degree, Garb undertook a supporting major in journalism before completing a post-graduate degree in broadcasting at the highly regarded Western Australian Academy of Performing Arts (WAAPA).

After working as an A-League analyst and commentator for sport radio station SEN, Garb was handed the ‘fantastic’ opportunity of going to South Africa to cover the 2010 FIFA World Cup.

It was an experience Garb says he’ll never forget, and one that shaped his career.

‘It was my first real fulltime football role, where I had immersed myself solely in the game for an entire month,’ Garb says.

‘It had a big impact on my career. I made some great contacts and it gave me a lot of confidence that I could work in this industry for a long time.’

Just 12 months later and the job of a lifetime had opened up for Garb. He was presented with the opportunity to move across to the UK to cover EPL matches and conduct interviews for feature stories with some of the biggest names in the football world.

Although the job was a ‘no-brainer,’ Garb admits he took his time to weigh up the decision.

‘Even though you’re presented with an opportunity that you know you’re going to accept, you still have to mull it over,’ Garb says.

‘It’s a big life change. You’re leaving your family and friends, you’re going into the great unknown. But at the end of the day, when you’re doing something that you love, it’s very easy for everything else to fall into place.’

Garb’s resume boasts interviews with footballing legends like Del Piero, Roy Hodgson and Tim Cahill, however he lists his 2011 interview with controversial English player Joey Barton as his favourite.

‘He’s an absolute character. On the pitch he’s got a bad reputation but off the pitch he’s probably the most honest, deep-thinking sport subject going around. He gave us insight and quotes that no one could have thought of. They were absolute gold.’

As a lifelong Liverpool FC fan, Garb lives out the fantasy of supporters around the world when he conducts pre-game interviews with ex-players and managers at Anfield for the Fox Sports program Matchday Saturday.

However, he stresses that you can never get intimidated on the job, even when you’re standing in front of your heroes.

‘Sometimes you get a little bit anxious and you get caught up in it a touch, but never intimidated. You can’t in this industry or you’ll get found out pretty quickly,’ Garb says.

‘You certainly enjoy it when you realise you’re talking to someone special. You might get a little bit nervous perhaps, but you’ve got to realise they’re also there to speak in a media role.’

Garb admits the one time he did get ‘awestruck’ was when he was interviewing Liverpool’s 2005 UEFA Champions League winning manager Benitez.

‘As a Liverpool fan he’s someone that I really love,’ Garb says.

‘I’ll never forget meeting him in a Liverpool hotel for the first interview I did with him. I opened the door and I had to take a couple of seconds to gather myself. It was a really special moment.’

Garb’s eloquent insight into the world game has seen his career blossom throughout the UK, Europe and Australia, but he concedes there is ‘no great secret’ to breaking in to the media industry.

‘You just have to keep working hard and keep trying to make your own breaks and then when you do get in you just have to be confident. In the end, the work ethic will get you through.’

Riley Beveridge is a first-year Bachelor of Journalism (Sport) student at La Trobe University. You can follow him on Twitter: @RileyBev.