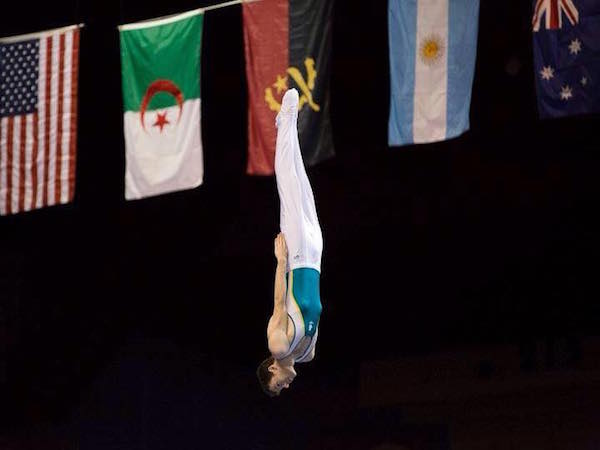 At the recent World Championship selection trials, part of Blake Gaudry’s routine consisted of 23 somersaults and 18.5 twists in less than twenty seconds.

“It’s a lot of fun just getting up and just spinning and rotating through the air. If I didn’t have fun doing it, I probably wouldn’t be doing the sport,” he tells upstart.

Since making its first appearance on the Olympic program in 2000, trampolining has become an extremely competitive sport.

Only 16 athletes from 13 countries can compete at the Olympics. In Gaudry’s Olympic debut, he was the youngest male competitor in the event, aged just 20.

Gaudry, now 23, is hoping to do it all again, but this time he’s chasing a podium finish.

“The long game has always been [Rio] 2016. 2012 was kind of the stepping-stone. We’re going to use that experience to our advantage,” he says.

Unfortunately Gaudry’s first Olympic experience was bittersweet. He took a tumble on the seventh of his 10 skills in the second and final qualifying jump, placing him 13th overall.

The six-time Australian champion has worked hard and is feeling confident heading into Rio qualifications.

He recently won the national championship title, and is heading to Portugal and Denmark to compete in the World Cup and World Championships at the end of this month.

“I’ve matured as an athlete and my outlook and approach to both training and all the other things surrounding training, to make sure that I’m at the top of my game, has really focused since 2012.”

Gaudry’s professional trampolining career began in 2007, when he made the move from Sydney to Adelaide with his family to train with national and Olympic coach, Nikolay Zhuravlev. He is now also trained by Viktor Zhuravlev, who is a seasoned competitor.

Gaudry did general gymnastic classes growing up, yet from a young age he was never the best in his sport.

“At the club I was at, I used to get there a few hours early and they used to throw me on the trampoline to get rid of extra energy, and in the end I found I enjoyed mucking around on the trampoline much more than gymnastics,” he says.

Since 2012, changes have been made to trampolining funding in Australia.

As part of his scholarship with the SASI, Blake receives a small amount of funding for coaching fees or competition expenses, but money has been reallocated to other forms of gymnastics.

He’s constantly pushing South Australia gymnastics to give more leeway with the funding.

“The last few years have been the most difficult in terms of funding,” he says.

Gaudry says he relies a lot on sponsors, in particular Vuly. He credits his family for supporting him financially and emotionally.

There are a lot of hours of training behind perfecting Gaudry’s skills and routines.

“At the moment I’m training about 12 or 13 sessions a week. Two of them are strength and conditioning, the rest are trampoline based sessions.”

In between all this training, Gaudry recently completed his Masters of Architecture.

“Success in sport is never certain so I have been studying for most of my trampoline career,” he said.

For the upcoming World Championships and ultimately the Olympics, he’s working on a few routines, with varying degrees of difficulty.

“With trampolining, it’s all about repetition. If you want to get one of the techniques perfect, you need to make sure it’s not just perfect once, but that it’s perfect every time.”

Perfection is exactly what Gaudry will be aiming for as he takes the final steps towards Olympic qualification.

Blake talks with upstart about the three aspects of trampolining and how he’s preparing for Rio 2016.

Gaudry is also documenting his path to Rio on the Australian Olympic website, which you can read here.

The upstart sports section and multimedia team are profiling professional athletes from sports not typically covered in the media, in our section, The Other Sports. Throughout this segment we are hoping to convey the life, struggles and dedication of modern day professional athletes. We also aim to give readers an introduction to these sports.