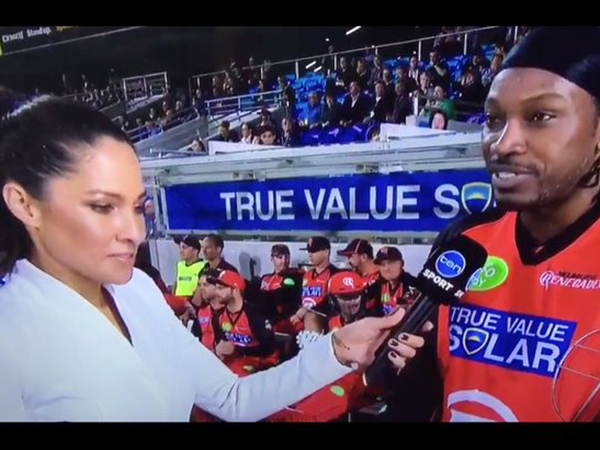 It was “just a joke” that has been “blown out of proportion”, claimed Chris Gayle in his response to the public furor over his now infamous interview with Mel McLaughlin.

Unless you’ve been living under a rock, you are bound to have seen the video. On Monday night during a Twenty20 match, sports reporter Mel McLaughlin approached the West Indian cricketer after his innings with a question about the match.

Gayle ignored the question, and instead of answering, commented on her “pretty eyes”.

“Don’t blush, baby,” Gayle said, after suggesting they go out for a drink after the match.

It doesn’t take a body language expert to conclude that McLaughlin was visibly uncomfortable and embarrassed by the remarks.

Gayle made a public apology in a press conference held at Melbourne Airport on Tuesday, but it was far from genuine, Kate Jones, senior reporter at Channel 7, tells upstart.

“It was just a complete farce, from start to finish, and it just seems like a hollow apology,” Jones says.

“While he was standing at the baggage carousel, his teammate Dwayne Bravo was grinning, and singing Justin Bieber’s Sorry, like they were all treating it as a big joke.“

That morning, the Melbourne Renegades, Gayle’s club, had put out a press release, saying that he would arrive at 10:45am alongside his teammates, and make a statement to the media.

“We were told by the Cricket Australia media manager that he’ll come out through the gates, come straight over, do a one minute statement, won’t take any questions, and then the CEO will do an interview. But then he came out, and he walked straight past us,” Jones says.

“He was about to walk out the door, when our other reporter said ‘Hey mate, are you going to talk to us?’ [Gayle] was talking to the CEO, clearly he didn’t want to do it. Then he walked back, stood there, and we were waiting for a statement, before he said, ‘Well aren’t you going to ask any questions?’”

During the press conference, Gayle said he attempted to reach out to McLaughlin, but had not spoken to her since the interview.

“There wasn’t anything meant to be disrespectful or offensive to Mel and if she felt that way, I’m really sorry for that,” Gayle said.

Gayle abruptly left his press conference made at Melbourne Airport, after Jones, brought up the fact that he had made McLaughlin feel uncomfortable in her workplace.

“As far as I’m concerned, it is a fair question. I think that was the biggest issue… it was an extremely unprofessional thing to do in someone’s workplace,” Jones says.

Since the interview, social media has seen a passionate divide in discourse over whether his comments were appropriate, with many labeling it a case of political correctness gone wild.

For women who work in sports, casual sexism is an everyday reality. It is a world filled with discrimination, innuendo, and “jokes”.

Gayle’s comments are not an isolated incident, they are a symptom of that culture of inequality.

“[Bloke Culture] is part of the problem. There have been a few stories in recent times that have highlighted this issue that there’s this innate sexism,” Jones says.

Neroli Meadows, a female sports reporter at Fox Sports, has spoken out in defence of McLaughlin, and on the issue of the power imbalance between men and women in sports.

“I know that people will hear me and just think that I’m being a whinging female, but the thing is, stuff like this happens 10 times a day when you’re in a male-dominated industry and people just need to trust us that it’s not okay. And when we say something like this is offensive, just hear us rather than saying: ‘Oh, shut up, you’re being too serious, just take it as a joke,’” Meadows said, in an interview with 3AW.

Gayle was fined A$10,000 (£4,800) by the Melbourne Renegades for his behaviour, but not suspended, with his team’s CEO, Stuart Coventry, saying the incident was a “one-off-scenario”.

However, since the interview, other instances of Gayle behaving in a sexist manner have come to light, with Meadows saying that he chooses his words to “humiliate” female reporters.

During the press conference, in response to whether considering the other incidences, Gayle should have received a harsher penalty, Coventry said they had not had any complaints, and were not officially aware of any incidents.

Women are not crying wolf over Gayle’s comments. For the most part, women feel embarrassed and move on, in an attempt to avoid the “whinging female” stereotype, as described by Meadows.

If more women had made official complaints for Gayle’s previous harassment, then his penalty may have been harsher now.

“Women in these situations need to stand up and make a complaint, but I can also see why they wouldn’t, because they don’t want to be seen as troublemakers, and they don’t want to do anything that may jeapordise their reputation or their standing,” Jones says.

In an industry where women feel a need to prove themselves, its disappointing that in a matter of days, Mel McLaughlin is now being acknowledged for being that woman Chris Gayle asked out on television, rather than an experienced, and hard working sports reporter.

“We want equality, we always want equality,” Mel McLaughlin said, speaking out after the interview and accepting Gayle’s apology.

“I don’t really want to be the subject of such conversations, I like just going about my business and doing my job,” McLaughlin said.

Whether or not Gayle is truly sorry for his actions remains unclear, but an important conversation in the wider community has been started.

In Australia, where professional sports are placed on a pedestal akin to religion, those who work in this industry, from the players to those who broadcast it, are role models, setting the tone for those watching at home.

Hopefully this incident can serve as an education, and assist in changing attitudes within sport.

Claire Varley is a second-year journalism student at La Trobe University. You can follow her on Twitter at: @ClaireVarley_, or read her blog at clairehvarley.com.