As a kid I vowed I would never drink coffee; I would never let the bitter taste pass my lips. But it only took me until my second year of uni to discover that this would be an impossible feat. Since fellow upstart member Sofia persuaded me to purchase a latte one day, in the hope that class would seem less daunting, I soon became hooked. So hooked, in fact, that I decided to search the internet (without much hope) for a place that offered coffee tasting — something similar to wine tasting, but with less wine and more coffee! And that was when I came across coffee cupping.

Coffee cupping is a technique used to determine the flavours and aromas of coffee. Highly curious, I decided to visit South Yarra’s Market Lane Coffee, a friendly cafe located in Prahran Market that offers public cuppings. Thanks to the Hoddle Street traffic, I was running a little late for last Thursday’s 10am session.

‘That’s OK,’ said owner Fleur Studd’s voice at the other end of the phone line. ‘You’ll probably miss a little bit of the start, but you’ll be there for the exciting part: the tasting and spitting.’

I hung up the phone. Spitting? I don’t spit in public. But I couldn’t back out now.

I rushed into the cafe after 10 (thankfully not missing anything) and was ushered into a little room that held the coffee cuppings. I could instantly smell that divine scent within its four walls. In the centre stood a wooden bench, and upon it, six blue containers filled with separate samples of roasted coffee beans, small round cups that resembled soup bowls, and some clipboards for recording particular features of the coffee, such as sweetness, acidity and flavour.

With just a small group of us present, the coffee cupping began. 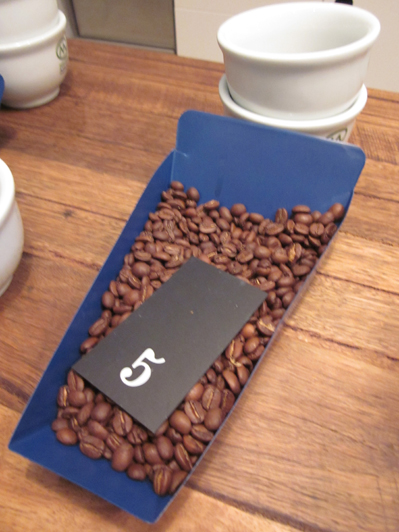 The roasted coffee beans - these ones were from Bolivia.

Toshi, our host, started off by taking us briefly through the process. Taking some beans from each sample, he ground them into a fine brown powder before placing them into the round cups. We were told that the amount of coffee is always measured in weight, not volume, so Toshi measured 12 grams of each.

This marked the smelling stage. From samples one through to six, we circled the table and picked up each cup, giving them a little tap and a shake, then dipping our noses into them with a few quick sniffs to inhale the fragrances. Some were stronger than others; some were fruity. One even had a floral scent. 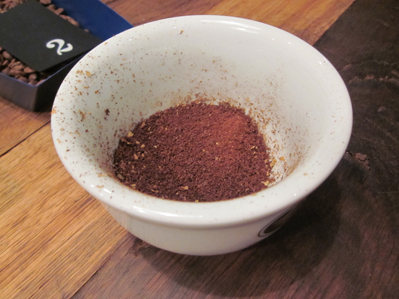 The ground beans - first stage of the smelling process.

Once our furious sniffing was over, it was time to move onto the aroma: the smell of the coffee once the boiling water was added. Each cup was filled to the top, turning the ground beans into frothy brews with a thick layer of residue on top. Again we noted the difference in aroma, putting our noses close to the cups and being careful not to dip them inside. Already it was possible to sense a change in smell once the water was added. 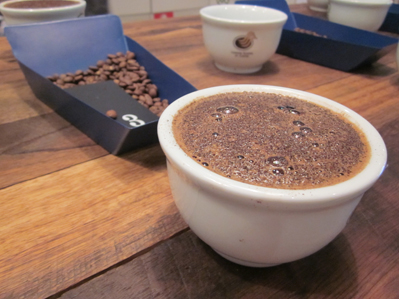 What the coffee looked like once the water was added. The top layer of substance is known as the 'crust'.

The final step of the smelling stage is to break the top layer, or crust, on the water’s surface, which apparently releases even more of the coffee’s aroma and qualities. This time we used a spoon to shovel away the granules, and began inhaling. At this stage, all the coffee smells were beginning to blend into one for me – I couldn’t easily pick the differences – except for number six, the fruity-floral smelling roast. Jason, another host, guessed it was a blend harvested in Ethiopia.

Now that the smelling was over and the grainy layer had been scraped away, it was time for the real fun to begin. Yes, the part where we ditched our role as humans and took on that lovely spitting trait so often associated with llamas. OK, so it wasn’t that bad. We let the coffees cool down for a couple of minutes so that the true flavours could properly be released — and to avoid scorching our mouths with boiling hot coffee in the process.

With spoon in hand, I followed the action of the others. The tasting stage involved scooping some of the coffee into your spoon, slurping it up in a quick motion, letting the flavour roll over your tongue, then spitting it gracefully back into a paper cup. And so the routine went; approach one coffee cup, slurp, and then spit. Rinse your spoon. Next coffee cup, slurp, then spit. There were points for slurping noises too, but I wasn’t game on trying that just yet. 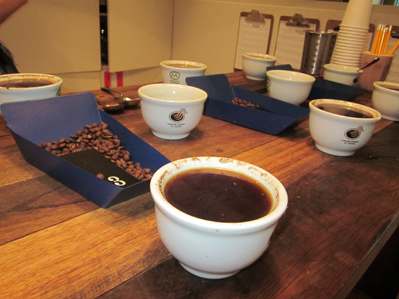 Once the crust had been scraped away, it was time to begin slurping and spitting.

The tasting process consists of several rounds. Generally, each coffee is sampled three to four times as the taste becomes more pronounced the longer it sits. Jason told us to try and make out the differences between them and decide whether they were smooth and silky, or dry; whether they felt heavy or light; and whether they had a sweet taste like that of a fruit juice.

Once the cupping was over and our tastebuds had their caffeine quota satisfied for the day, it was time to learn what each of the different samples were. Each cupping session varies, just as the coffee seasons do, so the roasts that are used depend on factors such as the time of harvest and the time it takes to be imported. The team at Market Lane Coffee like to use beans that are between nine to 10 months of harvest. There are several degrees to which the coffee beans can be roasted, but they prefer to use those which are midway through first crack and before second crack. The quality of the coffee itself is also reliant on many factors, including humidity and temperature, and how it is packaged. 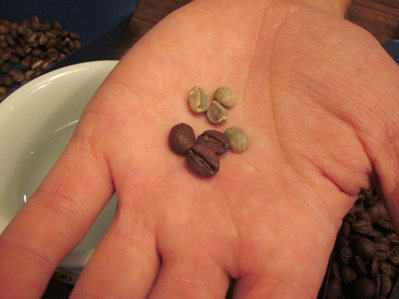 This is the difference between roasted and non-roasted coffee seeds, or 'beans'.

The six samples we tried came respectively from Brazil, Colombia, Guatemala, Tanzania, Bolivia and, as Jason estimated, Ethiopia. The Ethiopian harvest is considered a natural harvest, with a range of coffee beans in the one pick. The beans also had a very distinct appearance in comparison to the other samples.

Coffee cupping is an interesting yet educational way to experience coffee, and while I’m still no expert when it comes to the coffee bean, it’s definitely a fun way to learn.

Oh, and Sample Two was my pick…though I’m not entirely sure why.

So next time you order your latte, mocha or cappucino, just remember all the previous work, time and tasting that’s gone into that delicious blend. 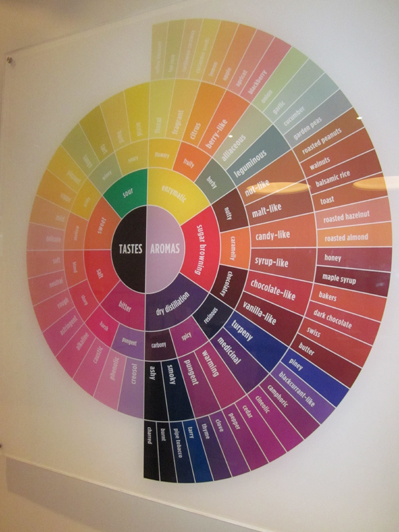 A helpful chart for describing the tastes and aromas of the coffee.

Market Lane Coffee is located in Prahran Market on Commercial Road, South Yarra. It holds free coffee cupping sessions every morning from Thursday through to Sunday from 1o – 11 o’clock.

Interested in reading more about Melbourne’s attractions? Check out some of upstart’s other getout reviews.