We’ve done the clubbing scene. We’ve been to bars. We’ve had lovely dinners around town. So what would be better on a perfect Saturday night in Melbourne than doing a ghost tour?

I find myself a half-believer when it comes to the metaphysical — sure, I’ve considered the possibilities of ‘the living dead’, but then that stubborn reality-wise part of me kicks in and I start questioning things all over again.

But this time I put my scepticism aside and embarked on the Haunted Melbourne Ghost Tour.

The two-hour walking tour is held every Saturday night by ghost-researcher Drew Sinton, who is also recognised as an author, occultist and local historian.

At 8:15pm we rushed down to the Haunted Bookshop, a mystical store on McKillop Street – off Little Collins Street – where the tours begin. The store has everything to do with the paranormal, from tarot decks to vampire novels to books about magic. A large crowd of people had already gathered, waiting for Sinton to make his appearance, and before long we caught sight of him at the bookshop’s entrance. With a long black cassock, lace cuffs, a short top hat and rings spanning his fingers, Sinton certainly looked the man for the job. I ask what made him choose this path.

‘It was a mix of insanity and masochism,’ he says, without much hesitation.

‘As a child, my dream was to own an occult bookshop; I have achieved this.’

Sinton has been investigating ghosts since the 1980s, and therefore it is ‘not a hobby for me; it’s my life’.

He says the tour began from talks he gave at his bookshop about local ghosts he was writing about. When he noticed people wanted to visit the places rather than hear about them, the tour was born. I was intrigued as to whether the bookshop itself had some dark history attached.

‘A ghost called Donald made his presence known when I conducted séances with a Melbourne clairvoyant man years ago,’ says Sinton. ‘He still appears out the back or down the rear stairs.’ 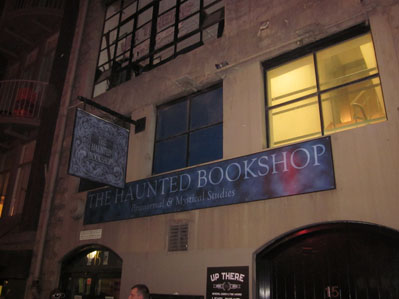 I won’t lie — before the tour started, I wanted to be scared. Maybe we would see a ghost in the flesh (or lack thereof), or have somebody trailing us while making spooky noises, or even have a creepy person jump out at irregular intervals. So it was fitting – and completely coincidental – when Sinton informed us it was a ‘supermoon’ that night. It was just my luck to pick the first night in 18 years when there was a full moon apparently 14 per cent larger and 30 per cent brighter than normal. Sinton described it as a night where the ‘loonies’ would be out. But I realised this expedition was not about instilling a sense of fear, but rather to do with feeding us knowledge about our city’s past.

The tour took us along the streets and laneways of Melbourne, many of which I was glad to be walking through with a group of people. Despite the warm night, the quiet, narrow lanes of old brick buildings and heavy graffiti would not normally be graced by my presence. Not even during the day. We stopped at various points along the way where historic deaths took place and where ghosts are now believed to haunt. Places like the Mitre Tavern, Pugg Mahones Irish Pub, and apartment spaces whose ghosts never left the sites. Sinton spoke of individuals who have seen the ghosts, and often pointed out ‘For Lease’ signs unsurprisingly displayed on the sighted properties. 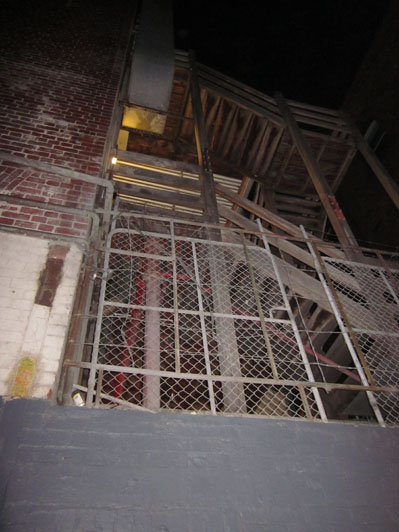 One of the lanes' haunted buildings

With all the stories Sinton tells us, I wonder if he is constantly on the lookout for new ghosts to add to his tours.

‘A police officer does not need to leave the station to find cases – the cases come to the station. For me, the bookshop is my station.’

We visited Little Lonsdale Street, which was once the city’s very own ‘red light district’ — a fact I never knew about our once-seedy Melbourne. Sinton also mentioned the numerologists who liked to join his tours, and showed us several buildings whose street numbers added up to 13. Coincidence again? We thought not.

But what would a ghost tour be without a visit to Melbourne’s oldest cemetery? Eerily, it was the part I was most looking forward to. Sinton led us to Burial Hill, the first interment site for Melbourne settlers — more widely recognised today as Flagstaff Gardens. There weren’t many burials here, and in 1837, Old Melbourne Cemetery was established instead. So it was only natural that the tour proceeded to visit this site as a final stage of the tour; a cemetery now occupied by Queen Victoria Market.

Walking through the market sheds at night was spooky enough; no people, no haggling, no movement. It’s a big empty warehouse with unfilled car spots and big mobile containers, yet the large incandescent lights remain on. The fact we were standing above an old burial ground where thousands of bodies lay, albeit in religious divisions, made it all the more creepier, but it seemed the perfect spot to end the evening. 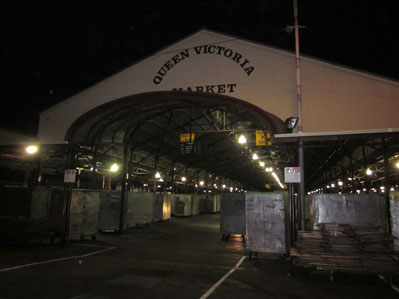 So am I a ‘believer’? I still can’t decide. But one thing’s for sure — if you go there expecting to be horrified out of your wits, or to spot a ghost, chances are you’ll be disappointed. But if you want to explore and learn more about the ‘most liveable city’ from a guide with visible passion and knowledge about the subject, then an interesting history certainly awaits.

The Haunted Melbourne Ghost Tour runs every Saturday night from 8.30 and has been operating for the past fourteen years. Prices are $20 while concession tickets are $18. Bookings can be made in person at the Haunted Bookshop, by phone or via the Facebook page. It is also recommended that you wear comfortable walking shoes.