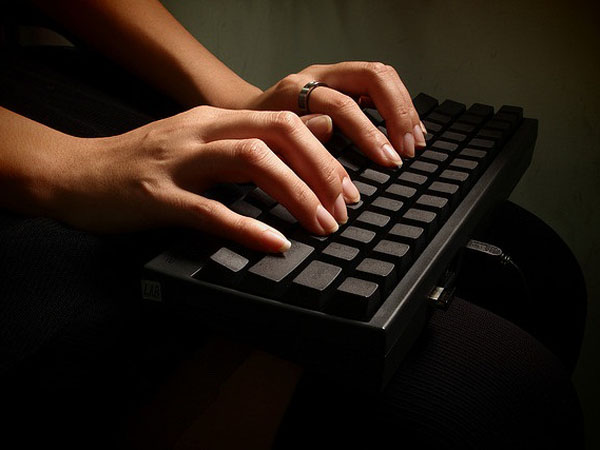 Writer’s block: A frame of mind where words fail you and you find yourself faced with a looming blank page that appears to grow bigger and bigger causing severe stress and anxiety. Often, a state of panic ensues, forcing you to desperately google the word ‘ideas’.

With the school year underway and assignment deadlines just around the corner, some advice to defeat the deadliest enemy of any writer is definitely needed.

After scanning the web and finding the most bizarre cures for writer’s block – notably ‘Doing the Hokey-Pokey’, ‘Eating a stalk of celery’ and ‘Allowing for eye-breathing’ – I thought some practical and ‘sane’ advice might be helpful.

First thing to know is — you are not alone. In fact you are in great company. Many, if not all accomplished writers, bloggers and novelists experience times when words simply won’t flow onto the page.

Even esteemed writers, including the likes of F. Scott Fitzgerald have fallen victim to writer’s block.

So here are some tips from my experiences as a writer trying to break through that infuriating block – no nunchucks necessary.

Give yourself a firm ‘unflexible’ deadline

When you’re first getting started you may ask yourself ‘Motivation —  where art thou?’. This is where a strict deadline comes into play. If, like myself, you need an end point, then the prospect of a deadline can force you to actually start typing. But make it a solid one, so no excuses can be made later down the track.

William Shakespeare may not have had a university lecturer to answer too, but I’m sure he gave himself personal deadlines to work towards. How else would he be able to get through all those pesky sonnets?

Become a cliché and whip out a conventional notebook

Don’t just sit there staring at the blank screen on your desktop summoning ‘The Dark Lord’ to print words on the page. I’ve tried it and it’s not at all effective. You need to give yourself time to think, away from the computer. And for the rare chance that an idea may spring to mind, a notebook is definitely handy to jot it down in.

“If you get stuck, get away from your desk. Take a walk, take a bath, go to sleep, make a pie, draw, listen to ­music, meditate, exercise; whatever you do, don’t just stick there scowling at the problem,” she says.

I often think of my best ideas when I am nowhere near my laptop. While you can just enter them into your hi-tech iPhone, the humble notebook gives you more of a sense of 1940’s writer nostalgia.

Just be ‘average’ and defy perfectionism

Some writers find they can’t write simply because they think their ideas aren’t up to scratch. Perfectionism can be one of the biggest writer’s blocks, due to constantly questioning the quality of your own work.

While you can’t rush perfection, you can certainly rush decent, passable and not half bad. High school English teacher, Jessica Allan says there are ways to overcome being too critical of your own work.

“It’s all about getting that pen to paper. It’s not about making it perfect the first time. That’s what stops the kids. Even though I’m not going to see their draft, they think it’s not good enough. No one can straight away make a masterpiece,” says Miss Allan.

Embrace being average until you have time to perfect your writing later on. It’s about the journey. Rome wasn’t built in a day, in fact it was built in over 800 years. Therefore by comparison you still have plenty of time up your sleeve.

Resist turning into ‘The Procrastinator’

Being ‘The Procrastinator’ will never get you far as a writer. Some might not recognise this obscure 90’s TV show reference but ‘The Procrastinator’ was a character in Nickelodeon’s ‘The Amanda Show’. She was a super hero that when called into action would say ‘I’ll do it!…. Eventually!’ and then would revert back to playing video games or listening to a CD.

The arch nemesis of any writer is procrastination. The key to overcoming a writer’s kryptonite is to stop searching for other things to do and just keep your mind on the task at hand. Facebook and Twitter can be quite the seductive little vixens on these occasions, but don’t give in to their obvious charms.

Therefore my number one tip to stick on course is to rid yourself of distractions and remove the word ‘eventually’ from your vocabulary. After taking into account my previous advisements ‘JUST WRITE SOMETHING!’ and fight the crime.

Take this advice under your writer’s cap and hopefully that mockery of a blank page will soon be filled up with words.

But if all else fails, just do the hokey-pokey, eat a stalk of celery, and allow for ‘eye-breathing’.