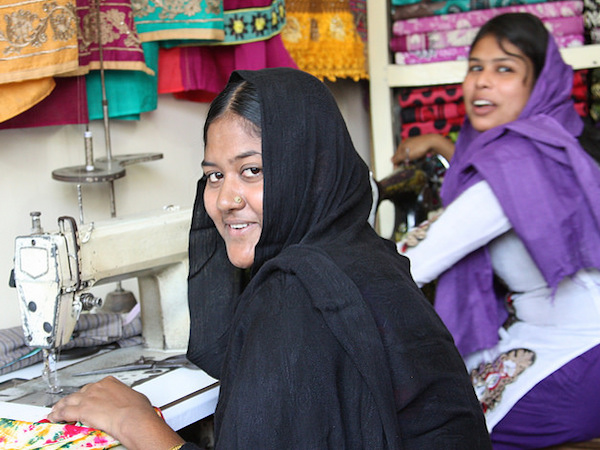 The collapse of the eight-storey building reportedly killed more than 1,100 workers and injured more than 2,000. It is recorded as the second-worst industrial accident of all time.

The Rana Plaza workers were responsible for garment production for more than two dozen Western retailers. While some companies linked to the complex were quick to pay compensation, others have only recently committed and many are yet to do so.

The Accord on Fire Building Safety in Bangladesh was signed by numerous companies following the accident, permitting staff to stop work if their safety is threatened. But much more needs to be done to promote safe and fair supply chains.

To commemorate the devastating accident, and drive long-lasting change in the industry, the second Fashion Revolution Day will be held on 24 April.

The day is part of an international movement called Fashion Revolution, which calls for reform of the fashion supply chain. Designers, academics, writers, business leaders and parliamentarians are involved in the global coalition.

The day will be celebrated internationally, with 71 countries involved in the Fashion Revolution to date.

“Because it’s an issue that goes beyond just one day, we want to make that conversation long-term,” she says.

There are Fashion Revolution events throughout the year, but the majority take place around the anniversary of the Rana Plaza collapse. There are around 17 events planned in Australia and New Zealand for this year’s anniversary.

Tually says events provide information on local production and what Australian consumers can do to make a difference. The events will also maintain a global focus and address international industry issues.

“There’s the issue of the living wage for garment workers in Cambodia, there’s the issue of the tanneries in India where people are dying of cancer and having respiratory disease, and even in Uzbekistan the forced labour of children who are taken out of school to pick cotton each season. We extend the conversation to all of those issues, as well as the Rana Plaza collapsing,” Tually says.

One way to get involved in the day is to use the “whomademyclothes” hashtag on social media. Individuals can turn an item of clothing inside-out to show what brand they are wearing, take a photo and upload it with the hashtag. They then ask the relevant brand: “Who’s making my clothes?”

Last year’s hashtag was trending at number one worldwide on Twitter.

Tually urges consumers to communicate with brands on social media in general, not just during the campaign.

“The more social media action there is, the stronger they’ll get the message that if you do the right thing, people will support you in droves and if you don’t, they’ll tell everyone in droves,” Tually says.

Designer Akira Isogawa, artist Liane Rossler and 1 Million Women founder Natalie Isaacs were amongst those who supported the not-for-profit cause last year. Supporters this year include Alexandra and Genevieve Smart of ethically-accredited Ginger & Smart and Kit Willow of KITX.

Ethical Clothing Australia (ECA) is an organisation responsible for Australia’s accreditation and labelling program. It allows brands to promote their garments as ethical and helps consumers make considered purchases.

Simon McRae, National Manager of ECA, tells upstart that Fashion Revolution Day is a reminder of what happens when the industry crosses the line.

“We need to keep reminding ourselves every year about what happens when we put greed in front of workers’ welfare, and when we’re more worried about profit than we are about making sure we’ve got an ethical supply chain,” he says.

“We’ve got a long way to go but this is a good starting point. These sort of days really make people aware that this isn’t going to go away.”

Fashion Revolution Day coincides with the release of the second Australian Fashion Report.

The 2015 report, conducted by Baptist World Aid, examines the practices of 59 companies and 219 brands operating in Australia. Whilst improvements have been made in the last two years, there’s still a way to go.

For example, the report found that 75 per cent of companies don’t know the source of all their fabrics and inputs, and none of the companies could prove the workers at their raw material suppliers were paid a living wage.

Many of the poor performers were renowned Australian retailers, such as The Just Group and Apparel Group which house multiple stores including Just Jeans, Peter Alexander, Saba and Sportscraft.

Big-name companies such as the Cotton On Group, H&M, Zara and Country Road showed improvement.

“We don’t support boycotting because ultimately that affects the workers,” she says. “If they lose the contract from that brand, you’re just punishing the person at the bottom of the line.”

The number of individuals around the globe who have committed to a fashion revolution is positive but also necessary if the persistent inequalities faced by textile workers are to be addressed.

Susannah Woolley is a third-year Bachelor of Journalism student at La Trobe University and editor of upstart. You can follow her on Twitter: @susannahwoolley.