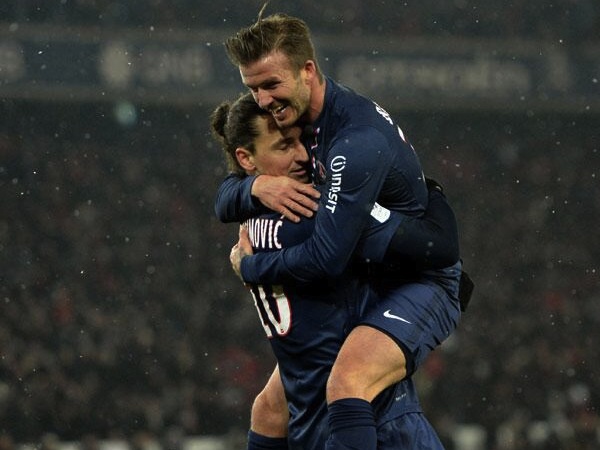 On the 23rd of September 1992, Manchester United travelled to play Brighton in a League Cup tie.

With the game delicately poised, manager Sir Alex Ferguson decided to take a gamble. He motioned to the bench, and there sat 17-year-old David Beckham. That day, a young boy played his first professional game of football. That day, a legend was born.

Fast forward to the present, and David Beckham has become a world-wide phenomenon. Having announced his retirement, the man from Leytonstone waves goodbye to his football playing days on a high, having played a role in Paris Saint-Germain’s first league title triumph in 19 years. The midfielder has now won league titles in four different countries – the first British footballer ever to achieve the feat – effectively cementing his place as one of football’s true greats.

In a statement released following his decision to retire, Beckham expressed his gratitude for the chance to fullfil his life calling.

“I’m thankful to PSG for giving me the opportunity to continue but I feel now is the right time to finish my career playing at the highest level,” he said.

“If you had told me as a young boy I would have played for and won trophies with my boyhood club Manchester United, proudly captained and played for my country over 100 times and lined up for some of the biggest clubs in the world, I would have told you it was a fantasy.”

“I’m fortunate to have realised those dreams.”

Such an emotional last game of my career, such an honour to captain a great side like PSG.

Blindly toss a dart at a world map and regardless of where it lands, you can be assured the name David Beckham will be recognised. Holding god-like status among adoring fans, Beckham has also been involved in his fair share of scrutiny. Unfairly criticized by some football pundits, he has been labelled everything from a celebrity gimmick to a marketing ploy used by big clubs to sell shirts, and perhaps most offensively, a Spice Girl’s arm candy.

But, love him or hate him, you cannot argue with his resume.

When you add the fact that he was the first English player to score at three consecutive World Cup finals, as well as holding the joint-second most goal assists in European Championship finals history, it becomes apparent Beckham was just as much substance as it was style.

Of course, talent is nothing without focus and determination, and David Beckham perfectly embodies both.

Following a disastrous send-off against Argentina at the 1998 World Cup, Beckham was consequently made a scapegoat for England’s relatively disappointing campaign. In fact, he effectively became public enemy number one in his home land. The man with the golden right foot was down, but not out.

On October 6th, 2001, England hosted Greece in its final qualifying game for the 2002 FIFA World Cup. English hopes rested on the right foot of a young Beckham when a free-kick was awarded in stoppage time, and with characteristic courage, suave and skill, Beckham coolly curled a trademark dead-ball around the Greek wall, past the hapless keeper and into the back of the net. It was pure elation for the Three Lions, and also served to rid of Beckham’s personal demons from 1998.

Blessed with the uncanny ability to spot up and execute a pass from almost anywhere on the pitch, Beckham will always be remembered for that goal from inside his own half against Wimbledon in 1996. The spectacular goal earned Beckham cult figure status.

His illustrious on-field career ensures David Beckham will go down in history as a true icon of the game. The 38-year-old concluded his statement by paying tribute to those closest to him.

“I wouldn’t have achieved what I have done today without my family. I’m grateful for my parents’ sacrifice, which made me realise my dreams,” he said.

“I owe everything to Victoria and the kids, who have given me the inspiration and support to play at the highest level for such a long period.”

David Allegretti is a first-year Bachelor of Journalism student at La Trobe University. You can follow him on Twitter: @davidallegretti