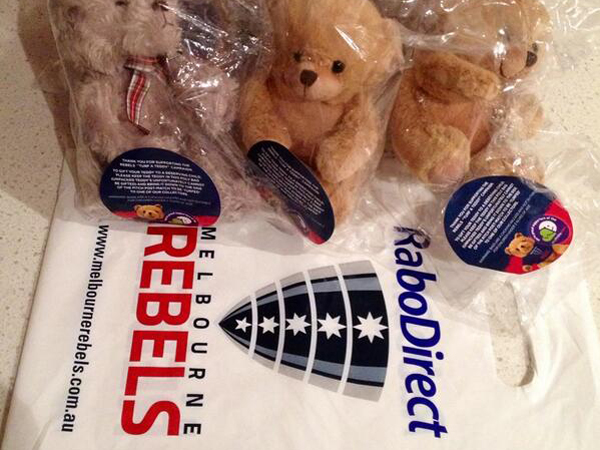 Melbourne’s Super Rugby team, the Melbourne Rebels, is paving the way for football codes in Australia, scheduling a match against the Western Force on Good Friday.

Yet despite holding a monopoly in professional football this Friday, it’s not revenue or exposure the Rebels are after. The driving force behind the move to play on the religious holiday is a warm heart.

Friday night’s clash between the Melbourne Rebels and the Western Force at AAMI Park is driven by the Rebels’ own ‘Turf a Teddy’ campaign.

Teddy bears can be purchased on the night and, simply by throwing them onto the field after the game, they can be given to kids at the Royal Children’s Hospital.

The bears by themselves cost $10, but non-members can buy one alongside a general admission ticket to access the game for $20 – a significant discount from usual entry prices.

In addition, all proceeds from teddy bear sales will go directly to the Royal Children’s Hospital.

All set to ‘Turf a Teddy’ for the Kids at the @MelbourneRebels vs Force game on Good Friday. #GreatCause #REBvFOR pic.twitter.com/fqXWoIbfQU

Media and Communications Officer at the Melbourne Rebels, Peter Fairbairn, tells upstart that the event represents a fantastic opportunity.

“Melbourne is the Good Friday Appeal, it’s as simple as that,” Fairbairn says.

“There’s no AFL footy on and we see that as an opportunity to get some non-traditional rugby fans to the game and to broaden our market a bit, but we also see the importance of respecting the Good Friday Appeal and everything which it stands for.

“We’ve had many meetings over the past few months and engaged with the Good Friday Appeal with what they do with the Royal Children’s Hospital and were delighted when they agreed to partner with us.”

BONDS will not only provide prizes and special offers to those attending the event, but has also promised to contribute $25,000 towards the Rebels’ donation, while Ernest Hillier’s will provide chocolates for spectators.

Fairbairn emphasises that the support of both brands has been “invaluable”.

“Our target is $50,000, but [BONDS] have come on board and said ‘look guys, what you’re trying is something new, you haven’t played a Good Friday game before, if you don’t reach your lofty target, we’ll certainly help you get to this point,’” Fairbairn says.

“Ernest Hillier have also come on board and they have arranged nearly 10,000 Easter eggs for the game. Again, that’s fantastic.”

It’s not only external partnerships that are contributing, though. According to Fairbairn, the players themselves are also embracing the occasion.

“The players have been fantastic,” Fairbairn says.

“Our players have certainly done far more media this week than we would normally ask of them, in terms of radio interviews, press interviews and TV appearances.

“We’ve also got Sean McMahon and Paul Alo-Emile heading down to Royal Children’s Hospital [today]. They’re going to go around for a couple of hours and meet some of the kids and that’s pretty special.”

The notion of sport on Good Friday has been a contentious issue and the source of much debate.

However, Fairbairn claims that the response to the Rebels’ initiative has been positively received by the Melbourne community.

“If you look at the ‘bible belt’ in the United States, one of the most religious sporting communities in the world, you’ll see that they play sport consistently on religious holidays and it hasn’t been an issue,” he says.

“We haven’t seen any opposition on religious grounds to what we’re doing and people have been generally very supportive of the concept and what we’re trying to achieve.

“We’re just really hoping that people who have always thought ‘gee, I should get along to Rebels game’ and are in town, take advantage of an opportunity to get a really cheap ticket and support the kids at the same time.”

If Friday night turns out to be a success, the Rebels will have surely lit the path for other codes to follow in the future.

And while it is clear that the wheels are already in motion for the other codes, credit must go to the Melbourne Rebels for building the road.

Nick Schomburgk is a third-year Bachelor of Journalism (Sport) student at La Trobe University, and is a staff writer for upstart. Follow his Twitter: @nickschomburgk.