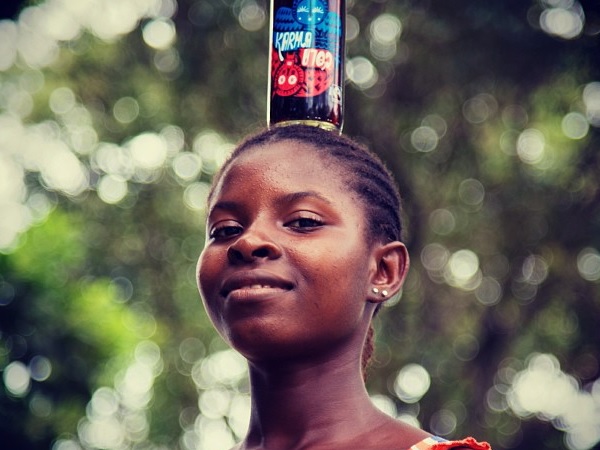 For many people, cola is caffeine, sugar, slick advertising and the cause of rotten teeth – directly correlating with vending machines, cans and fast food outlets.

Most people would not connect the soft drink with Sierra Leone, but, that’s exactly what the directors of All Good have done with the creation of Karma Cola.

Karma Cola is one of the products made by the ethically-focused company. All of the company’s fruit and drinks are certified Fairtrade.

This means the original producers- the farmers and communities in developing countries- are paid a fair and stable wage and are given a trading opportunity that aims to support the community rather than exploit it.

The village of Boma in Sierra Leone has benefitted from their fair trade arrangement with All Good. Like many villages in Sierra Leone, Boma was affected by the country’s civil war and the community is still rebuilding itself.

The cola nuts grown for centuries in the community are now the main ingredient in Karma Cola, giving Boma its first overseas buyer. The money the community is making from the sale of the nuts is helping with the rebuilding efforts.

Karma Cola was created when the three directors realised there was a huge difference between the successes of the cola industry and the lives of the people who made the ingredients in it.

“(The directors) wanted to go straight to the heart of it and make the best fair product that they could. That’s why they decided to get involved with Sierra Leone and Boma,” Victorian sales manager Jonathan Walton tells upstart.

“Not only are (the villagers) now getting the opportunity to sell their product, they now sell it with the benefits of getting paid fairly.”

“We donate two cents per bottle back to Sierra Leone- I think that’s now stretched beyond two cents- but we helped build a bridge that helped the farmers access their land, which allows them to do more trade,” says Walton.

The old logs which used to link the two parts of the village have been replaced with a structure sturdy enough to be driven over.

What Goes Around Comes Around from Karma Cola on Vimeo.

“We’re also putting young girls through school, which is fantastic. It’s really having strong impacts in the area,” Walton says.

It became important in Western culture around 100 years ago, when it was an essential part of the original cola recipes.

There is now an estimated 1.7 billion servings of Coca Cola sold every day. However, despite the nut naming the carbonated drink, you will not find any trace of cola nut in the drinks you buy from the supermarket today.

“What people actually taste in regards to the bigger brands is not even real cola a lot of the time,” says Walton. “It’s their manufactured syrup.”

The company’s dedication to fair practices was recognised in June as they won Fairtrade International’s Fairest Trader award. The award was for their innovative products, direct involvement with the community in Boma and their “engagement with fair trade producers”, according to the All Good website.

Walton says that the only change the award has made to the company is the added publicity.

“It’s given us a bit of a leg up, but we’re still doing the same things as we’ve always done. We’re still getting out there; we’re still sticking to our morals. We haven’t got too big for our britches yet.”

The award also recognised the importance of Karma Cola in promoting fair trade.

“I think there’s a lot more room to grow for fair trade, but I think people are becoming more and more aware of it. There’s some great room to grow.”

Erin Leeder is a second-year Bachelor of Journalism student at La Trobe University. You can follow her on Twitter: @155erin