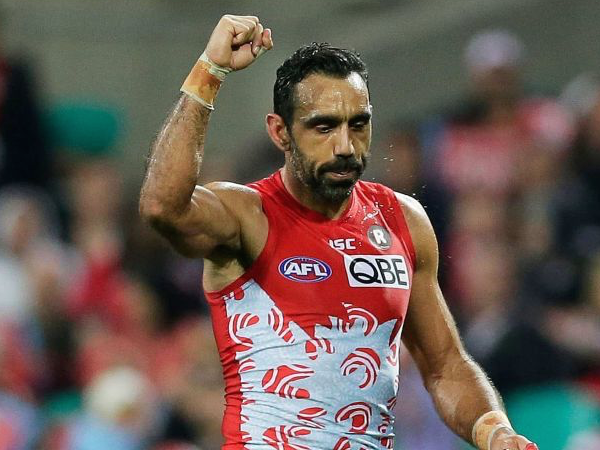 After this, he quietly told the Sydney Football Club’s playing group that the game had been his last.

No fanfare, just a moment shared with the Swans’ inner circle, his brother Brett, and close friend Michael O’Loughlin.

This decision was reflective of how Goodes has handled the controversy surrounding him all season – with stoicism and dignity.

Goodes, the 2014 Australian of the Year and a man of proud Adnyamathanha and Narungga heritage, has been the target of booing throughout 2015 and previous years.

While the provenance of the jeering is impossible to definitely prove, it is certain that it’s an unedifying look for the game and its fans.

Goodes has achieved everything possible in the game – two Brownlow medals, two premierships, three club best and fairest awards, four selections to the All-Australian team – and changed the way the game was played.

He won his first Brownlow in 2003 playing as a ruckman, and his second in 2006 as a midfielder.

He was named in the Indigenous Team of the Century at centre-half back, and kicked six goals in the under-18s grand final in 1997, as a rangy 17-year-old centre-half forward.

Early in his career, Goodes was as palpably a look at the future of footy as Marcus Bontempelli is now – fast, tall, strong and fit, capable of taking overhead marks and crumbing ground balls.

He was an almost impossible match-up.

It would be a shame for the booing and jeering to overshadow what is an objectively brilliant footballing legacy.

AFL writer for The Age, Rohan Connolly, tells upstart that it shouldn’t.

“I think the longer time goes on, the more the hysteria will die down a bit,” Connolly says.

“It’s going to be discussed no doubt, but I think the longer time goes and the more perspective people have, the more it gets put in context… the football legacy stands on its own anyway.”

He says that with time will come tolerance.

“With the off-field stuff, I guess my hope would be that the more understanding people have over time of Indigenous issues, the more tolerance there is for people who are prepared to be outspoken about their beliefs.”

Connolly points to the similarities in the treatment of Goodes and Indigenous players of a previous generation, Nicky Winmar and Michael Long.

Winmar famously took a stand against racist slurs at Collingwood’s Victoria Park, by lifting his shirt, pointing at his skin and saying: “I’m black, and I’m proud to be black.”

Long took allegations of racial abuse from Collingwood’s Damien Monkhorst public, after officials at the time were reluctant to pursue the matter.

Both are cherished figures now in the annals of the sport, but Connolly says they both faced a similar public reaction to Goodes in their day.

“In this particular case, people have often thrown up Michael Long and Nicky Winmar, but I think they’ve got selective memories, because my recollection of both those cases is that in the immediate aftermath there was a bit of hysteria and stuff going on, even months later,” he says.

“With Michael Long, I remember Collingwood, when Essendon played Collingwood in the return game, that banner.”

The Collingwood cheer squad brought a banner to that game with a red and black baby’s dummy emblazoned on it, with the words: “Sticks & stones may break my bones, but names will never hurt me.”

1995: Michael Long complains about being racially abused by Collingwood players. The club replies with a banner. pic.twitter.com/o2P9zbcRvS

“Then with Nicky Winmar, you had Alan McAllister’s comments that came later,” Connolly recalls.

McAllister, the president of Collingwood at the time, denied his club had a problem with racism, saying that Aboriginals would be welcome “as long as they conduct themselves like white people, well, off the field”.

Winmar has recalled receiving death threats after the incident. Clearly Winmar was just as confronting in 1993 as Goodes is in 2015.

Goodes has also declined a spot in the traditional Grand Final day motorcade for retiring players, a decision which seems motivated by a desire to avoid the booing.

Connolly says that Goodes would likely have been booed if he were to do the lap of the MCG.

“To some extent, yeah, he would have [been booed],” Connolly says.

“The longer it’s gone on the more it’s attracted a sort of sheep element… if you get a crowd of 100,000 people, there’s going to be enough dickheads in it to sort of jump on the bandwagon.”

As Goodes’ footy career comes to an end, it will be interesting to see what he does next.

A political career is a possibility. His public profile, the strength of his convictions, and his body of advocacy work, make him an attractive proposition.

A Greens source recently suggested to upstart that Goodes could be a good fit for them.

Connolly hopes, however, that Goodes will take on a post-career role in footy.

“I think the AFL will be smart enough to work very hard to get him involved, to create some sort of role for him or program he can be part of,” he says.

“They need all the decent PR they can get, and I think it would reflect well on them.”

With his contributions to football at an end, Goodes’ next step will define his legacy to society.

Whatever he does, it will be a legacy to be proud of.