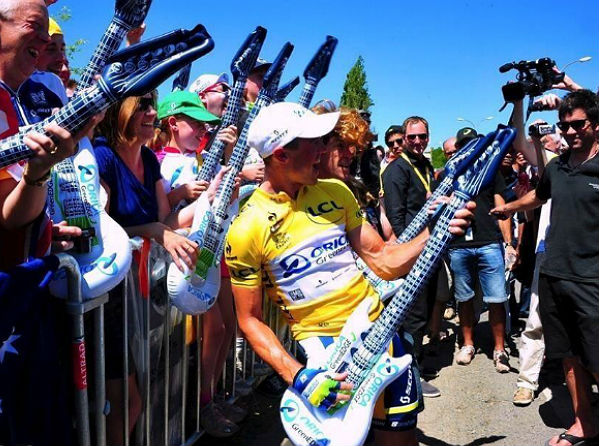 The grass is green for Orica Green Edge

Orica Green Edge have completed the opening nine stages of the Tour de France as the team on everybody’s lips; with two monumental stage wins, four days spent in the yellow jersey and a mishap which threatened the opening of the 100th edition of the race.

The Aussie owned outfit, in its second season on the world pro cycling tour, is proving far from the development team seen in 2012; with Australian Simon Gerrans and South African Daryl Impey both spending time as the race’s overall leader.

It wasn’t a good start to this year’s tour however: with the team bus getting caught under the finish line of stage one, initially forcing race organisers to alter the course. Some quick thinking and more than difficult reversing saw the bus cleared and the normal course retained.

Their tour prospects increased dramatically with a stage win for Gerrans on the undulating stage three, which was later revealed as part of the Orica Green Edge strategy for months prior to the race.

The Melburnian stormed home to overrun Green Jersey holder Peter Sagan for his second individual stage win of his career.

Congrats to @simongerrans – two days in yellow, and a great team player. You rock… pic.twitter.com/wwGdES8wmS

Orica’s fantastic performance continued in the fourth stage team time trial, out riding Omega Pharma-QuickStep to claim a one second victory, and the overall lead for Gerrans heading into the more difficult sections of the race.

Impey, who is Gerrans roommate while on tour, took the yellow in stage six before relinquishing the honour to pre-race favourite Chris Froome on the slopes of the Col de Pailheres.

Froome, helped by Australian Team Sky teammate Richie Porte, dispatched many of his pre-race contenders in the heavily demanding stage eight, to take the overall lead of 58 seconds to his teammate.

The Australian’s time in second place would be short lived however, with last night’s torturous stage nine proving too much; with Porte falling more than 18 minutes behind his teammate.

Finishing second in 2012, the Kenyan born Froome will now look to hold the yellow the entire way to Paris, while holding off Movistar’s Alejandro Valverde and Belkin’s Bauke Mollema.

Cadel Evans- In what may be the last time we see the 2011 winner on the biggest stage, Evans lost time on the team trial before dropping over four minutes to Froome in stage eight. With his chances of a second general classification victory all but gone, Evans may look to gain a stage win when the tour moves into the Alps in a weeks’ time.  16th Overall.

Richie Porte- Froome’s second in command, the rising superstar Porte has played his role to the letter in his support of the race leader. Can be credited with the loss of time to many of the pre-race contenders by forcing the pace of stage eight. Porte would pay for his attack on stage nine however, falling more than 18 minutes behind the race leaders. 33rd Overall.

Simon Gerrans– The opening week could not have gone much better for the nice guy of Australian cycling, with two stage victories and two days spent in yellow.  Now through the Pyrenees Mountains, he may look to gain another stage victory in the middle stages of the course. 67th Overall.

Michael Rodgers- the three time world time trial champion is having one of his strongest tours in many years, consolidating his position in the Peloton, to finish the opening nine stages in 18th. Working in support of Saxo-Tinkoff’s Alberto Contador, Rodgers will look to maintain his position through the tenth stage, before perhaps rising in overall contention with the first of two individual time trials in stage 11. 18th Overall.

Matt Goss – The team leader for Orica Green Edge has been out of sorts in this year’s edition, with the 26 year old rarely a feature in the sprint finishes. Goss will look to regain some form through the middle stages, to perhaps challenge the likes of Peter Sagan and Mark Cavendish. 164th Overall.

Simon Clarke – Got in the breakaway group in stage three, before being reeled in by the Peloton eight kilometres before the finish. Clarke has been of strong support to both Gerrans and Impey as they looked to hold onto the yellow jersey, and showed his good form by featuring in another breakaway last night. 80th Overall.

Stuart O’Grady- The veteran in his 17th straight Tour de France has been a crucial workhorse for his Orica team. Reeling in a breakaway group on stage six kept the Australian team the yellow jersey, with his unparalleled experience proving crucial in the race’s ever-changing dynamics. 172nd Overall.

Cameron Meyer – His first Tour de France, one of Australia’s future prospects will look to gain as much experience as possible through the likes of O’Grady and Gerrans. 165th Overall.

Brett Lancaster– Despite sitting at 164th in overall placings, Lancaster has been used as support for Gerrans and Impey, and has performed several stints at the front of the Peloton to ensure Orica Green Edge’s continued success. 162nd Overall.

Rohan Dennis– Like Meyer, Dennis used his first Tour as experience as they lead Australia’s next crop of professional cyclists. Quit the race before last night’s stage, one day prior to what was originally planned.

What to expect next:

As the tour’s foray into the Pyrenees is now over, the riders will receive respite through a well-earned rest day, a flat stage ten and an individual time trial in stage eleven. The mid race time trial, a feature not seen in recent races, will likely shape the overall contenders to Chris Froome’s yellow jersey before the race moves into the Alps early next week.

Look for the likes of Gerrans and Clarke to continue to attack, to consolidate the fantastic opening week for the Australian team. Stage 14 looks the likely stage for the Australian’s, with the up and down stage profile suiting Gerrans’s gritty style.

As the far as the leaders jersey is concerned, Froome will likely hold his position through to the Alps, where his closest rivals may look to regain time on the mountain top finishes. The two individual time trials may prove dangerous for the Englishman however, with exceptional time trial riders less than two minutes a drift.