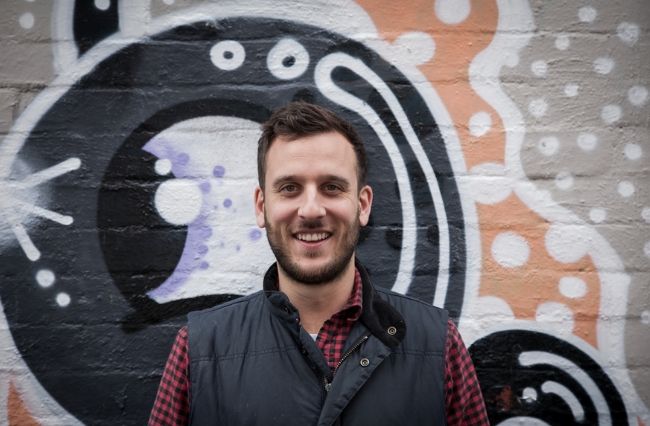 Hamish Walmsley is in his element as he tinkers with the bottling machine, or tests the latest batch of cold brew.

On its surface, he is simply brewing coffee, but for Walmsley it goes deeper than that. His purpose is “to find this intersection between people, planet and technology and how they all connect,” he tells upstart.

It’s been seven years since his friend and business partner, Jimmy Ellis, pitched him the idea of starting First Press Coffee Merchants. The company is currently Australia’s leading cold drip coffee producer in what is is a niche but growing market, and sees Walmsley and Ellis exporting coffee to stores like Dan Murphy’s and bars around Melbourne.

It’s not just about selling coffee. Establishing a sustainable business model and building a positive culture is what drives Walmsley.

“The idea of harmonising technology and embracing people and culture and creating a culture is what keeps me ticking along,” he says. “The sense of community with all of [the staff] coming in, our ability to use our voice within First Press to spread the word of plastic recycling; that has been the way I connect that.”

Factoring in the environmental impact of their business is a key aspect of how First Press operates.

“It’s something I spend a lot of my spare time researching because I think it’s really important,” he says.

“The planet is the planet. [We] try and use our voice [to talk about sustainability], because we’ve been given this platform. It’s not the biggest stage in the world but we’ve got the ability to actually share that message.”

In his office, the sun shines onto Walmsley’s desk, illuminating the numerous samples of coffee, package prototypes, and new ideas scribbled on note pads.

“There’s always stuff that we are pondering,” he says. For example, in the next room, a bottling machine he engineered, which can efficiently label, clean, fill and cap bottles.

“Having [a Bachelor of Science] is very transferable to entrepreneurism. It definitely helps with trying to build machinery.”

The modest factory is filled with the fresh smell of coffee beans, and produces thousands bottles of cold drip coffee each production cycle.

“The biggest moment for me is when we took our production in-house. That was a real monumental leap. We had to figure out our own production methods and all the rest. It was a real leap of faith.

The first ever run we did, we made 250L. It was a pretty big moment for us. We were like ‘wow, we’re really doing this now,’” he says.

Most people dream of starting a business with their mates. The key to Walmsley and Ellis’ successful partnership is the combination of their talents and personalities.

“Jimmy and I have been really blessed with having very opposing skill sets. We spend more time with one another than anyone else in our lives.”

“Even Jimmy’s partner, I see him more than he sees her. It’s just like a relationship. One of our business coaches actually called it that. They said you’re effectively in a second marriage.”

A shared passion for quality coffee and striving for personal growth and stimulation have also been integral to their success.

“Jimmy and I are almost unrecognisable from ourselves seven years ago. We want to be connected to creating an awesome culture and bringing awesome people into the business. That’s what matters to us. Not a mountain of cash.”

And of course, adapting the business to more sustainable methods of production is never far from Hamish’s mind.

“I think as we actually grow it gets easier. I think it was a lot harder at the start because we didn’t have the resources,” he says.

“Putting solar panels on the roof, which would probably offset all of our power, changing banks; things like that. You can make those choices when you’ve got the resources.”

Through all their achievements and planning for the future Hamish understands the importance of maintaining a network of supportive and knowledgable people around.

“Jimmy and I are under no illusions that we know everything and there are plenty of people around us that have done this before.”

“You don’t know what you don’t know, so we have always sought having enough people around us that can support. Like mentors, business coaches.”

This support and advice has carried First Press through its concept stages and into production.

“I can remember a handful of conversations from the very early days that were super integral to us starting. And it was all free advice. And the further down the rabbit hole you go you end up finding yourself in the position where all of a sudden someone is asking for help and you just remember how important it was at the start.

Jimmy and I have actually been in positions where that has been a possibility. We’ve been able to mentor and give back.”

Article: Rebecca Connell is a first year Media and Communication student (Media Industries) at La Trobe University. You can follow her on Twitter: @RCwrites