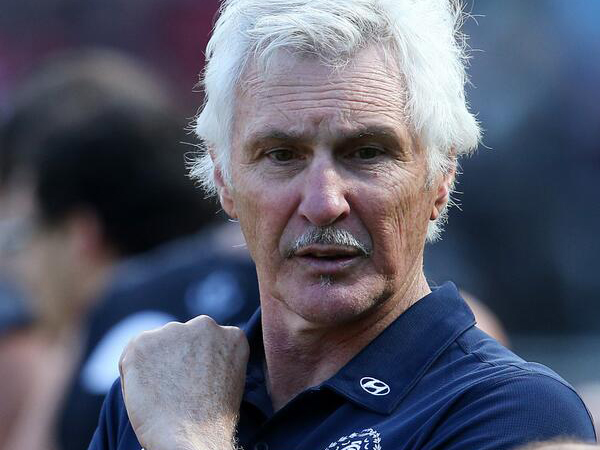 The club’s dark days, thought of as a thing of the past, has started to threaten once again on the back of demoralising losses to Richmond, Essendon and Melbourne.

And if it’s a quick fix the club wants, history suggests this isn’t the right move.

Hopes for 2014 have all but faded, but Carlton’s circumstances have a stunning look of deja-vu about them.

Cast back your memories to the early 2000s, when Carlton had to rebuild from never-before-seen infractions that were handed down from the AFL. Loss of draft picks and a fine of $930,000 crippled the club on the field, as well as financially, setting up a period of dark days at Princes Park.

That calamity happened at an inopportune time for the Blues, as star players from the ’90s began to retire, leaving gaps in the lineup. Not being able to recruit young players was always going to hurt the club long-term.

For the 2003 season, Carlton appointed Denis Pagan to fill the void, after Wayne Brittain was sacked after just one year at the helm. Brittain was highly regarded as one of former Carlton coach David Parkin’s best assistants.

But Pagan, a two-time premiership coach at North Melbourne, was to breed a positive culture and restore the proud club to its lofty heights of years gone by.

Unfortunately for Pagan, an ageing coach with an ageing game-plan, the time he spent at the Blues stunted the growth of the club.

Transitioning his style of coaching to Carlton might have looked good in theory, but with the likes of Brett Ratten, Andrew McKay, Stephen Silvagni and Craig Bradley retiring, Carlton’s young and inexperienced list lacked the skill to execute the game-plan.

So Pagan and his recruiting staff brought in recycled players: Mick Martyn, Daniel Harford and Digby Morrell to name a few. The experiments didn’t work and Carlton found itself in a sustained lull that will forever be the darkest period in the club’s history. In five years, the club ‘won’ three wooden spoons; the only three in the club’s 150-year stand in the VFL/AFL.

But, most worryingly for Blues fans, the same thing appears to be happening again almost a decade later.

Mick Malthouse is a proven coach who has won three premierships at the AFL level. He has a distinct game-plan and was brought in after poor performances from Brett Ratten.

Ratten’s squad was injury-riddled at the end of 2012, after reaching premiership favoritism earlier in the year.

The first sign of similarity is that Malthouse and the Blues’ recruiting team brought in Dale Thomas, a favourite son from Collingwood, to try and bolster the stocks.

Malthouse’s defensive style of coaching is reliant on pinpoint passing and working the ball up the wings. What worked for Ratten was the ability for his players to run and carry the ball. They are two very different styles of play.

The board’s decision to sign off on getting Malthouse to the club could prove to be costly, as the transition to his gameplan could take too long. Players such as Jarrad Waite, Andrew Carrazzo, Chris Judd and Heath Scotland are ageing and may not play on past next year. Much like the big-name retirements a decade ago, these players are the backbone of the current playing group.

But it isn’t all on Malthouse and the strategy. The problems run deeper than that.

At a recruiting level, Carlton has been poor for the better part of a decade. Recruiters Wayne Hughes and Shane Rogers fell behind while other teams drafted carefully.

Frighteningly, on the eve of last year’s draft, Carlton’s most recent acquisition in the recruiting department, Luke Williams, quit the club after just months at the helm. Williams was second in charge at Geelong under its maestro Stephen Wells, thought of as the man that built the teams that won three premierships in five years.

Williams left Carlton just weeks before the draft citing ‘personal reasons’, yet less than a month later signed with Richmond after it is understood that several clubs were chasing his services.

Shane Rogers has since taken over at the top, however being the recruiter under Wayne Hughes, now redundant, doesn’t bode so well for Carlton.

The calls for Malthouse to rebuild the Blues echo that of the calls for Pagan to do the same ten years earlier. Drastically changing the gameplan and poor recruiting are hurting the Blues, but it’s still the tip of the iceberg.

Expect them to attempt the rebuild, but the ghosts of the past may yet come back to haunt them again. The best thing the Blues can do this time around is learn from them.

Matt Walsh is a third-year Bachelor of Journalism (Sport) student at La Trobe University, and the current editor of upstart. Follow his Twitter: @MattWalshMedia.