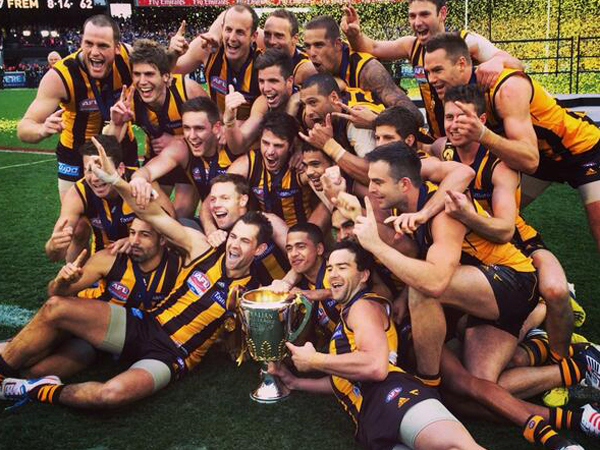 Last Wednesday, the AFL held its annual Captain’s Day, with the majority predicting that Hawthorn will take out this year’s premiership and therefore secure back-to-back flags.

But a single premiership is hard enough to come by, let alone consecutive ones.

History shows how hard it is to win consecutive premierships and with an ageing list, a tough draw and a lack of young talent, the Hawks will find it difficult to successfully defend their title in 2014.

In 116 years of competition, there has been only 21 occasions where the defending champion won the Grand Final the following year. That’s 18 percent of clubs successfully defending their title.

Today, the competition has several equality systems in place, including the draft and the salary cap, to prevent dynasty eras from happening on the AFL scene.

The reigning premiers will face one of the toughest fixture lists in memory this year, they’ll play the other three preliminary finalists of 2013 twice.

Alastair Clarkson’s men might just fall behind the eight-ball.

And although Hawthorn has recruited Ben McEvoy who will give their midfield another dimension, the loss of Lance Franklin and the evergreen Brent Guerra will hurt more than first thought.

The argument that the Hawks’ forward structure is better without Franklin is yet to be proven, with the four matches the former Coleman medalist missed last season being against average opposition.

They played a middle-tier Port Adelaide side in round 16, bottom-four teams St Kilda and Western Bulldogs in rounds 17 and 20 respectively and a qualifying final against Sydney being the exception.

They do have some depth but Clarkson hasn’t had the opportunity to play younger players like Geelong or Collingwood have in recent years.

Remarkably, half of Hawthorn’s list is under the age of 23 but many have not had the opportunity to prove themselves at the elite level, with only eight of them playing in the senior team last season.

Hawthorn has the fifth oldest list in the AFL, with an average age of 23 years and 349 days, only younger than Fremantle, North Melbourne, Richmond and Sydney.

They enter the 2014 season opener with four players from their premiership-winning team over the age of 30, while Luke Hodge and David Hale are also turning 30 during the year.

Interestingly, of the top six in the club’s best and fairest last season, four of them were over 30. Combined with Brian Lake claiming the Norm Smith Medal, it illustrates how much they rely on their older brigade.

Each of last year’s remaining preliminary finalists had only one player over 30 in their top six players for the 2013 season.

Meanwhile Sydney has Franklin to complement Kurt Tippet in attack, Gary Rohan will only improve this season and they have the perfect blend of experience and youth.

Geelong’s much talked about younger players are also starting to take the brunt of responsibility from the older generation and Fremantle will have the heartbreak of last season to spur them on – much like the Hawks of 2013.

Hawthorn have a tough ask and it will take something special to repeat the feats of such a successful 2013 season, but if anything is guaranteed, Alastair Clarkson will have his men eager to meet the challenge head on.