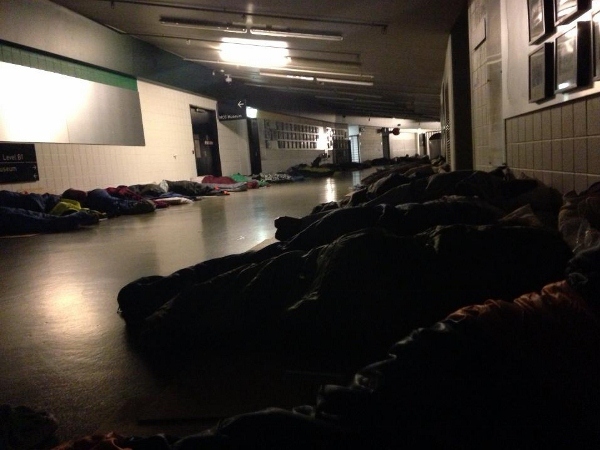 On any given night in Australia more than 22,000 people are homeless.

One group working to tackle this issue is Melbourne City Mission. Established in 1854, Melbourne City Mission work to provide aid and support for people in need, steering them away from disadvantage to reach the ultimate goal in which people have equal access to resources and opportunities in a fair and just community.

As well as homelessness services these programs range from palliative and aged care to justice programs, all with the aim to provide aid to Victoria’s disadvantaged.

All year round Melbourne City Mission encourages people to donate money to their services or volunteer their time. In addition to this, Melbourne City Mission organises specific events at various intervals throughout the year. One example of this is ‘PJ Day,’ in which participants are urged to wear their PJ’s to school or university.

Whilst all these initiatives were indeed raising money, Melbourne City Mission decided to go one step further.

The idea of a hugely publicised event in which a large number of people could participate would not only ensure that a large sum of money would be raised but also that more people would become aware of the plight that Australia’s homeless youth are facing.

That is why on Thursday 18th April Melbourne City Mission partnered with the MCG to host the first ever ‘Sleep at the ‘G.’

Boasting several famous faces, ‘Sleep at the ‘G’ aimed to not only promote awareness for youth homelessness but to also raise a sum of $300,000.

The Gate 5 entrance to the MCG was crowded with tables, all stocked with various things for participants to collect. With companies such as Fort Knox donating cardboard boxes and Anaconda donating water bottles it was clear that not only the event but also the cause was being widely publicised.

As much as participants were encouraged to enjoy themselves, the real purpose of the night was not forgotten. Buskers such as The Pierce Brothers were posted at various intervals throughout the MCG corridors. As well as volunteering their time to perform at the event, every cent that was thrown their way went directly to Melbourne City Mission’s goal of raising $300, 000.

In between performances from bands such as The Hillbilly Killers, videos of individuals experiencing homelessness were shown to participants in an attempt to illustrate the way the issue of homelessness can affect anyone.

CEO Ric Holland’s speech gave insight into where exactly the proceeds for the night would go and who would benefit from the money raised.

It wasn’t until lights out that realisation hit. With the lights off, the wind blowing through the open doorways and the sounds of Melbourne at night booming through the MCG speakers participants were finally able to appreciate how fortunate they were: in a sleeping bag with a full stomach whilst there were others with none of what they had.

The overall feeling as participants left the MCG was of pride and achievement knowing that they were helping to tackle the issue of youth homelessness.

La Trobe University student, Claire Gray, was among the participants on the night.

“When I think of all the people my own age out there on the street every night, what I did doesn’t seem like such a big deal,” said Gray, “If my money can help just one person then I know that what I’ve done is worthwhile.” Says Gray.

A total of $302,872 was raised with the number expected to rise in the next few weeks. The proceeds from the night go directly towards one of Melbourne City Mission’s homelessness services. Frontyard Youth Services aims to give young people choices that help their health and wellbeing as well as turning them away from disadvantage.

For those who missed out on the chance, ‘Sleep at the ‘G’ organiser Isaac McGregor has announced that “’Sleep at the ‘G’ will be an annual event for [Melbourne City Mission], held at a similar time each year.”