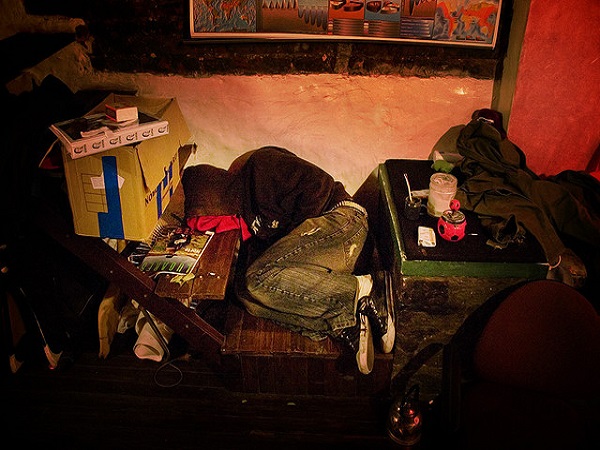 The word homeless often conjures images of older, drunken males sleeping on the streets. However a large percentage of homeless Australians are not “sleeping rough” and they are not old at all.

Although it may not be visible, homelessness includes a range of living dynamics beyond sleeping rough, with the smallest percentage of homeless Australians sleeping on the streets.

There are three categories of homelessness which people often move through like phases. Primary homelessness is experienced by people sleeping on the streets or in impoverished dwellings.

Secondary homelessness is experienced by people who are living temporarily in one place or another. This is often known as couch surfing and these are the people most likely to access shelters. The majority of Australia’s homeless sit in this category.

Tertiary homelessness is experienced by people staying in inadequate accommodation such as boarding houses and caravan parks.

So why are young people so vulnerable to homelessness?

The main reason is they feel they can no longer live in the family home because of family conflict, family breakdown or domestic or family violence and must find a better place to live. However this is not always possible.

Mr Bowden said in over 70 percent of cases he has dealt with, young people are forced into homelessness due to abusive parents.

More young females are subject to homelessness than males as they are more likely to suffer from abuse. This is unlike the other age brackets where the percentage of homeless males and females are almost equal.

Another major factor is that young adults are dropped from state care at 18 years of age, regardless of their living circumstances. The CREATE foundation “Transitioning From Care” report cards have found that about 40 percent of young people leaving out-of-home care will experience homelessness within twelve months of exiting.

“Without support from significant adults in their lives, these young people do not have access to resources that can help them to maintain accommodation, earn a living wage and remain connected with school and work,” says Mr Bowden.

Intergenerational poverty is increasingly evident due to the high cost of living. Children who are born into disadvantaged families, of which have already had contact with the homeless system, will find it extremely difficult to break the cycle.

Contrary to popular belief. substance abuse is rarely the reason for homelessness; even in adults only three per cent of homeless Victorians are addicted to substances or are mentally ill.

Although, an overwhelming number of young Australians find themselves without a place to call home, with many Melbourne organisations are working to decrease that number in our city.

On the 22nd of May, Melbourne City Mission will be hosting its second annual Sleep at the ‘G event to raise funds for disadvantaged youths.

As the name suggests, Melbournians can spend a night sleeping in similar conditions to those experienced by the homeless. Funds are raised through the sale of tickets and sponsorship from friends and family of the participants.

Last year more than $300,000 was raised and went toward the redevelopment of the Frontyard Youth Services program. Funds from this year’s event will allow Melbourne City Mission to build a new youth refuge in Melbourne’s CBD.

The refuge is going to be the first of its kind in Melbourne, a media spokesman for the organisation told upstart.

“The refuge will offer young people central, safe accommodation with a suite of support services on their very doorstep. It will be staffed 24 hours a day, 7 days a week,”

The real challenge is reaching people before they progress into the primary homelessness stage. The further into homelessness one goes, the harder it is for them to recover.

The Lighthouse Foundation provides training to professionals working with victims of trauma, which ultimately plays a part in diverting them from entering the homelessness population.

Most importantly, young people that have a physical home but feel unsafe need to be aware that help exists, before it is too late. The responsibility of raising such awareness is not only on these organisations but the whole community.

According to Mr Bowden, one advantage young people possess over adults is their resilience.

“No matter how hard life has been, young people are extraordinarily resilient,” he says.

“When you couple that with an effective treatment program in the Lighthouse model of care, you have all of the ingredients for a successful recovery and for the young person to enjoy all of the same things in life that you and I take for granted.”