While Australian subscribers struggle to access the US Netflix content library after a crackdown, Sevil Kaya provides a guide on how to continue accessing it. 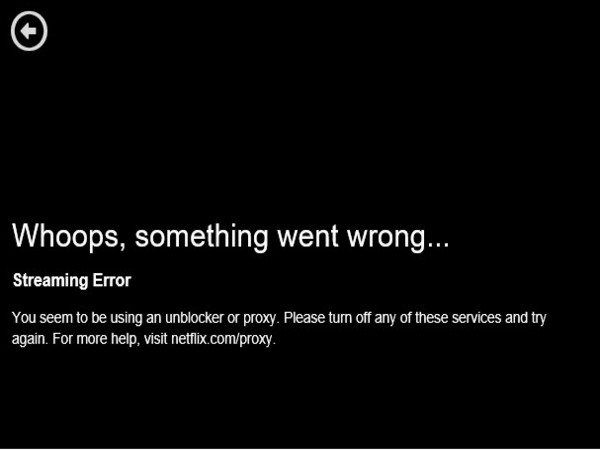 Netflix VPN users, does this message pop up every time you log in?

While some Australian Netflix subscribers are struggling to access the content of the US Netflix, there are various ways to get around the blocking systems.

Earlier this year, Netflix announced they would be coming up with effective solutions to deter users from using any software that allows them to access content outside of their residential country.

“In coming weeks, those using proxies and unblockers will only be able to access the service in the country where they currently are,” Netflix’s Vice President of Content Delivery Architecture, David Fullagar, wrote in a blog post.

“We are confident this change won’t impact members not using proxies.”

These proxies and unblockers are being used to access Netflix in other regions because of their wide variety of content in comparison to Netflix Australia.

According to Flixsearch, here is a list of the largest Netflix regions by number of titles, with US taking the lead.

“We are making progress in licensing content across the world and, as of last week, now offer the Netflix service in 190 countries, but we have a ways to go before we can offer people the same films and TV series everywhere,” Fullagar wrote in a blog post.

So what is a VPN and what does it do?

Basically, they trick Netflix’s system into thinking the computer’s connection is coming from a different country of origin – America in this case – when it in fact is coming from Australia.

This gives customers access to the more than 5000 titles in the US market.

However, Netflix is stepping up their game by continuing to use its new blocking methods by blacklisting IP addresses that VPNs and some software.

“Since the goal of the proxy guys is to hide the source, it’s not obvious how to make that work well. It’s likely to always be a cat-and-mouse game,” Netflix chief product officer Neil Hunt said in an interview at the 2016 Consumer Electronic Show.

“[We] continue to rely on blacklists of VPN exit points maintained by companies that make it their job. Once [VPN providers] are on the blacklist, it’s trivial for them to move to a new IP address and evade.”

If your VPN is no longer working, here are some of the best replacements to try:

uFlix uses the IP address and syncs it to their user system, which helps mask the location and display content based on the desired location.

The IP addresses are constantly changed so that if one gets blocked, before the user comes across it, another IP address is assigned.

Whilst a few users are blocked from Netflix, uFlix is working to find a solution.

“Some users are starting to have issues with Netflix blocking non-Australian content when going through uFlix. Though it is only affecting a few users at the moment, we expect this number to grow,” they wrote in a blog post.

“We are working on a solution to get around these new measures and apologise for the inconvenience to those who are currently only getting Australian Netflix.”

ALL users facing issues with Netflix. Please add these to your router – https://t.co/9W0cRpw1xh

ExpressVPN works on a range of operating systems (iPhone, Android, etc), has unlimited bandwidth and high speeds over all their servers, is quite easy to set up and has the highest level of security in the industry.

A chesterfield IS a couch, and Netflix is WAY better when you can access the US catalog! Get US Netflix with a VPN https://t.co/693s7ZN6ii

Buffered currently has servers in 29 countries, “spanning the whole world and adding new ones regularly.”

They say that they have “unlimited speeds, bandwidth and server changes while allowing five simultaneous connections from anywhere in the world.”

31 new, original shows coming to #Netflix in 2016. Binge on all of them with #Buffered #VPN https://t.co/pvdRICB5QJ pic.twitter.com/Fn2PL8X6kL