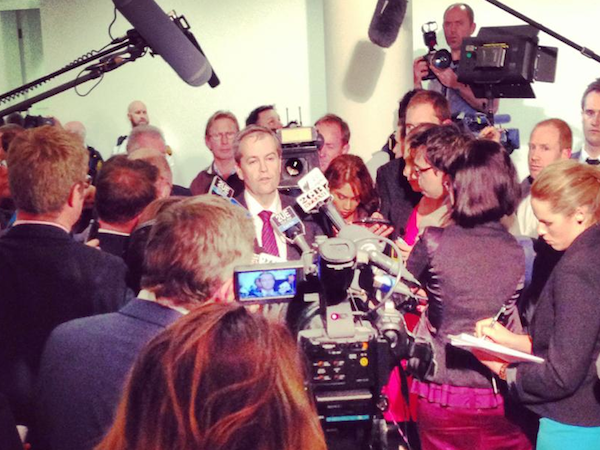 Before dim early morning rumblings could make way for late afternoon roars, an air of significance hung over Parliament House.

With leadership petitions a little more than a whisper, parliamentary proceedings appeared to be operating as usual.

National Senator Barnaby Joyce solemnly reflected on the career of his outgoing opponent Tony Windsor, who joined fellow Independent Rob Oakeshott in announcing his retirement from politics earlier in the morning.

Shortly after, Question Time came and went with the usual Coalition critiques and government gift questions.

Sharing a cup of tea with Minister for Parramatta, Julie Owens as 4pm approached – discussing female leadership and cannon fodder – it seemed the day was destined to end in a lull rather than a shout.

However, entering the House of Representatives press gallery for Tony Windsor’s valedictory address, Prime Minister Gillard set into motion the chaotic events of the early evening.

I remained in the house for Windsor’s remarks, despite an empty press gallery, while kingmakers and faceless men plotted behind closed office doors.

After a momentary respite, the next course of action was to sprint through the mural hall, racing the clock to arrive before Minister for Employment, Bill Shorten delivered his would-be Prime Ministerial eulogy.

Awaiting the Minister, security guards herded the media flock into the designated press pen, designed to stop journalists and cameramen from spattering into the halls.

Soon after Shorten arrived he proceeded to throw his support behind Kevin Rudd, all but ensuring the former Prime Minister became the future again.

A series of members passed before the assembled mass – entering the chamber ahead of the decisive vote – leaving journalists with nothing to do but wait.

Journos in suits crumpled on the floor as patience ran thin for the anticipated decision. As minutes turned to hours, photographers and cameramen dashed to drag a TV into the jam-packed pen to watch the other national battle, State of Origin. 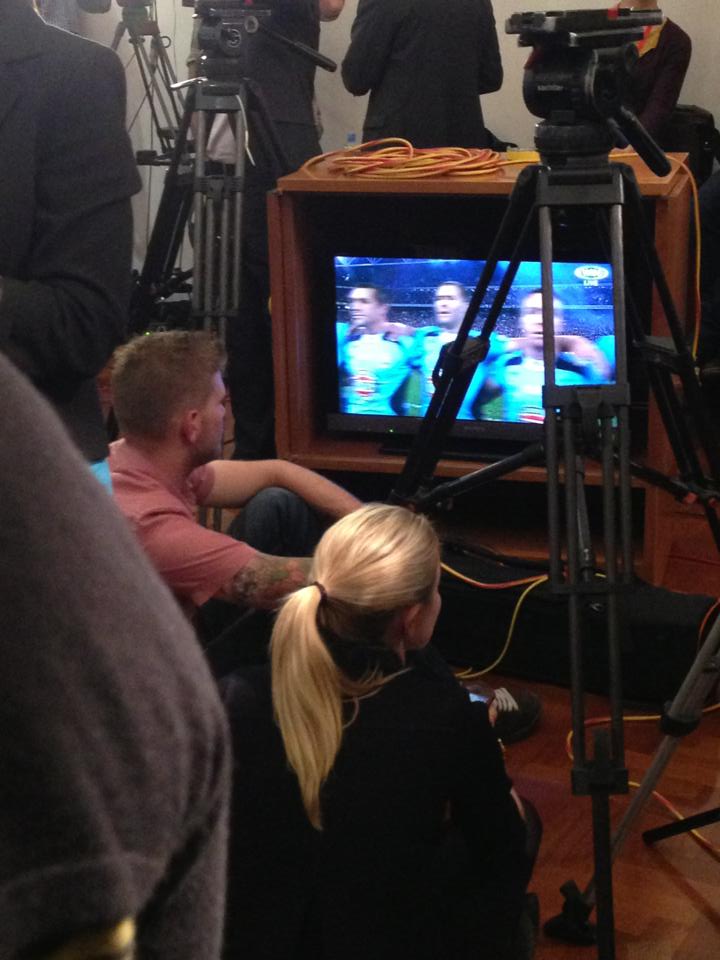 Behind the caucus doors, points were being scored and teammates scorned as previously held allegiances fell by the political wayside.

Tweets citing sources within the room became gospel, as we all waited confirmation on the fate of the Labor Party leadership. As a result, thumbs continuously scrolled smart phone screens, refreshing social media streams every second.

The slightest sound in the hallway sent cameras flashing, as the anticipation reached frenzied heights.

Such was the tension, ABC presenter Mark Simkin enlisted what was hopefully an intern to massage his shoulders.

Even with the rumors confirmed, the gallery awaited the exit of prominent Labor figures, hoping the most fleeting of glimpses would shed light on the darkness behind closed doors.

The most memorable exit came from Minister for Education Peter Garrett, with red eyes indicative of a man whose political career had come to an end, mere hours after it’s crowning success.

Handing in my visitors pass at the ministerial door, the gravity of the day began to weigh on me.

Amidst the excitement of behind the scenes dealings and persistent press packs, it would have been easy to lose perspective on the events of the day.

However, having returned to my hotel, the historic significance of the election of the new leader became clear.

Despite the politics, this was truly a revolutionary day inside Australia’s Parliament.

Bridget Rollason is a Bachelor of Journalism student and a member of the upstart editorial team. You can follow her on twitter @didgeriedoo.