Nicholas J. Johnson is a con man, but not as you know it. 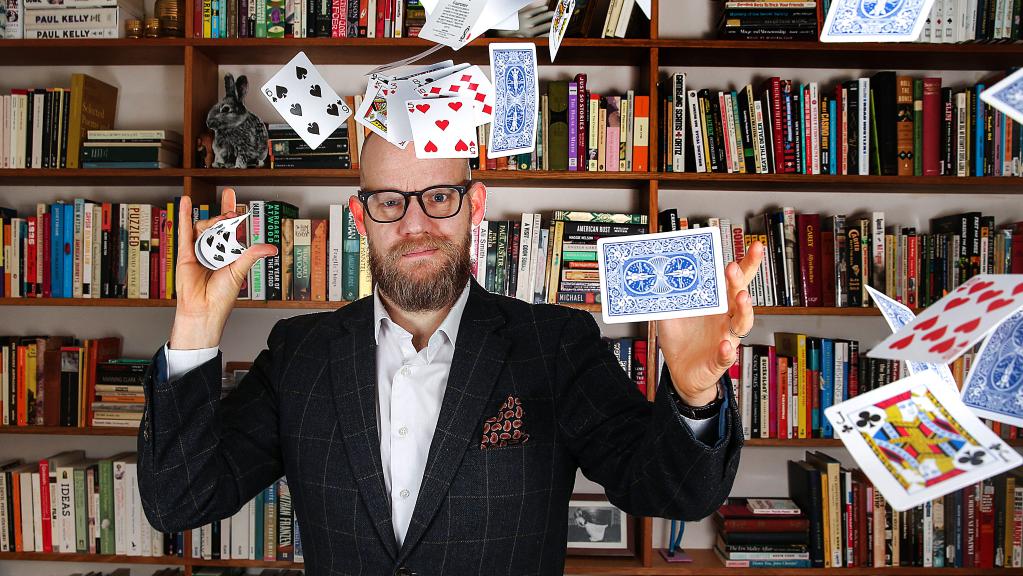 “I like magic because you are literally making something out of nothing. You’re making something exist that doesn’t exist in the real world but you’re still managing to create the illusion that it does.”

Melbourne magician Nicholas J. Johnson is a self-proclaimed con man who lives a life of imagination, with a constantly-moving repertoire of jokes and tricks.

Magic is one of the oldest performing arts in the world. The oldest reported magic trick, the ‘cup and balls’, is almost 5,000 years old.

Johnson developed his magic skills while growing up in a circus based out of Canberra and says from a very young age he was around jugglers, unicyclists, magicians and performers of all sorts.

“Growing up in a circus was surprisingly normal … I just happened to hang out with this very strange, colourful collection of people in my spare time, which gave me kind of a warped sense of what it was to have a job,” Johnson tells upstart.

The well-known magician has never done anything else. “I did for a brief time when I was nine consider maybe becoming a teacher but I quickly grew out of it,” Johnson says.

Johnson performs for people of varying ages and likes the fact that he can switch back and forth between his adult and children’s shows.

“What I do for kids and what I do for adults is completely different not just in terms of the types of tricks but what the audience expects, what I expect and what the character is. I keep them completely separate so that people know what to expect when I show up.”

Keeping the magic alive is something Johnson has been working on his entire life. Although he is a major success at kids parties, going by alter ego Tricky Nick, he says one of his favourite things to do is teach people how to avoid being fooled.

“I think a lot of the time magicians come and they fool people and then they leave them hanging a little with this sense of ‘wow something happened but I don’t know what it is’,” Johnson says.

“There’s mystery, wonder and entertainment, there’s something going on that they feel like they want to connect with.

“I love, not necessarily ruining the trick, but explaining what goes on inside your brain when you get fooled; how magicians’ tricks are used by con artists and the way the media deceives us in the same way a magician deceives you with a deck of cards.”

Throughout history, magic has often been used to trick people into believing that the magician has special powers. Johnson says, although that is one side of it, these days a lot of magicians use their skills to deceive and take advantage of people.

“Thousands of years ago it was done by high priests who would use the skills of magic to pretend that they were talking to gods. Now you have people like John Edwards who pretend to talk to dead people,” Johnson says.

“Things like psychics and clairvoyants and people talking to the dead. Even people talking about things like neural linguistic programming, pretending they can read body language signs and all this pop psychology stuff.”

The magic show, he believes, is based on an unspoken agreement between audience and magician.

In fact, Johnson uses his magic shows to expose the tricks of the con artist’s trade. By inspiring the audiences to think critically, he reveals what it takes to never be scammed again.

“I have stolen the watch clean off the wrist of an FBI agent, cheated a group of Canadian Mounties at three-card monte and baffled top-ranking officers of the Australian Federal Police. Not bad for a magician from Melbourne,” Johnson says on his website.

“We need to fight to save this golf course.”

“I have these playing cards!”

Whilst some people are focused on abusing the idea of magic, Johnson believes it’s an art form that continues to develop.

“Magic is very flexible. The definition of magic is essentially performing the illusion of the impossible. That’s a fairly vague definition. It evolves.”

Johnson’s advice for people who want to learn magic is to jump in with both feet.

“Don’t worry necessarily about fooling people or entertaining people or being the best. You’ll find there’s so much there that you can grab hold of, and try and experiment,” he says.

“That’s what it is, just a wonderful way of playing and if you’re new to it just go for it. It’s not like learning to drive a car where you have to learn the rules or anything, you can just get in there and learn as you go. Have fun.”

Combining comedy, deception, and magic is what makes Nicholas J. Johnson one of the most interesting magicians in Australia.

Whatever you do, don’t trust him.

Jiordan Tolli is a third year Bachelor of Journalism student at La Trobe University. You can follow her on Twitter @jiordant