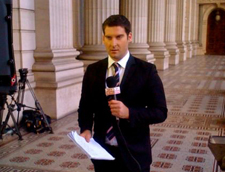 Amidst the usual hubris of suits and skirts moving through the Melbourne’s CBD on a warm day, Sky News reporter Ahron Young cuts a unique figure from the pack. Dressed in shorts and thongs on a rare day off, I watch him furiously message away on his phone for half a city block, never taking his eyes off the screen.

Appropriately, it’s this constant persistence, effort and use of technology that has rewarded Ahron as a journalist – his humble beginnings proving that hard work alone is the key to success in this difficult industry.

Raised by his mother in a ‘hippy community’ in Northern NSW, Ahron insists that he ‘always wanted to be a journo’, even from a young age. Building his own makeshift TV sets and doing work experience at the ABC on weekends, he says ‘TV always seemed like such amazing technology to me, as far away from the hippy commune as you could get’.

This extraordinary desire for a career in journalism led him to send ‘364 letters to every TV and radio station in the country’, where he got just one response, from a horse racing newspaper. His efforts paid off eventually, as he was offered a role at his local newspaper, covering stories across the Mornington Peninsula.

Ahron’s enthusiasm and initiative has always been the cornerstone of his success in the industry. After moving to Melbourne at the age of 19 to read morning news for free on gay radio station JOY, he began his own business at home – compiling news bulletins in the morning and evening for stations unable to afford a dedicated reporter.

With around six stations feeding stories off his network and a rising reputation as a news reader on JOY, Ahron eventually scored a role at 3AW, somewhat by accident.

‘I had written down the telephone numbers of 3AW’s news director and the ABC’s news director. I called ABC and asked if they had any jobs, and they said yeah, come in for an interview in an hour. So I put on a suit, and they asked me if I knew where the interview was. When they told me the address I realized I’d phoned up 3AW by accident, but I went in anyway and got the job,’ he jokes.

At just 21 years of age and with no tertiary education, Ahron believes his initial time at 3AW was ‘extremely tough’. But his persistence as an overnight reporter eventually gave him the opportunity to cover the 2004 Asian Tsunami, which he describes as ‘an experience he will never forget’.

‘I got there and it was just full on. You were just filing reports every hour. I remember I needed sleep, so I turned my mobile off. And I got a call on the hotel phone saying ‘you’re not there to sleep, get back to work’. That was after the third day of being awake.’

As he casually picks at a salad with ‘not enough chicken in it’, it’s hard to imagine how the same person who was raised in a casual seaside town on the Mornington Peninsula has travelled so far.

An international job opportunity took him to London as a foreign correspondent for Sky News, where he covered the death of Pope John Paul II and the London bombings, before moving to Russia to undertake a role as an anchor at an English news channel in Moscow.

‘It was -37 degrees for two months in the winter. And you worked four days on, four days off, because those four days off you were literally snowed in. So that’s why I left.’

Ahron is now back in Melbourne, where he’s worked as a reporter for Sky News ever since. Currently, he is the host of The Melbourne Report, a show which he has created largely alone – doing everything from hosting the show to creating its graphics.

‘You need to learn the technology. Learn how to use a camera, not just how to turn it on – but what a white balance is, how to make a good shot. Watch the news for how it looks, because these days, video journalists are becoming more and more common, particularly when starting your career. Everyone should know how to shoot and edit their own material.’

Like many journalists, Ahron has had to make sacrifices to get where he is today, but he thinks it’s all been worth it for the thrill of the job and a successful report. With such passion and drive for what he loves, you’re sure to see his smiling face on your TV screen for years to come.

Jesse Setaro is a second year Bachelor of Journalism student at La Trobe University. This is his first piece on upstart. You can follow him on twitter: @jsetaro.