There is debate over the effect sky rail will have on the communities it runs through, writes Nathan Oakley. 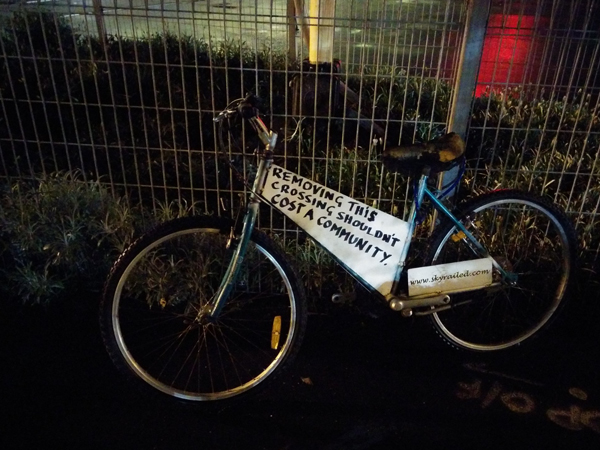 The removal of fifty rail crossings was one of Victorian Premier Daniel Andrews’ key policies leading into the 2014 election. However in practice, the execution of the task has caused divisiveness within communities along the Cranbourne-Pakenham line.

In order to alleviate traffic congestion in the area and ultimately deliver higher capacity train services along the line, eight kilometres of skyrail needs to be constructed. A key concern of residents is the usage of space underneath the skyrail, with the potential for the areas to become graffiti ridden and unsafe during the night.

Melbourne has multiple examples of elevated rail, which can help in understanding the effect skyrail could have on the community. Balaclava station and areas of Oakleigh are examples of raised railway lines that have been covered with constant graffiti.

The issue in these areas is due to design flaws, says transport blogger Daniel Bowen.

“Balaclava’s elevated rail line is on an embankment, which means graffiti vandals have a lot more canvas to make use of, while there is little natural light underneath the Oakleigh road bridge, making it an easier target for vandals,” he says.

These existing elevated rail areas have an approximate height of 3-4 metres, whereas the proposed skyrail sits at 9-10 metres from the ground. In concept graphics from the government, spaces with generous greenery are shown underneath the almost four storey tall skyrail. 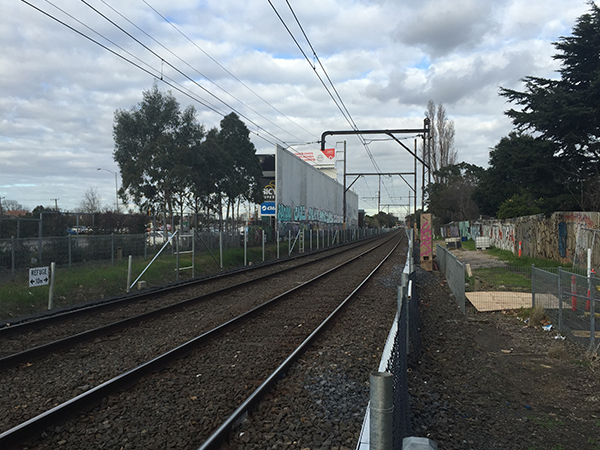 Rail along Grange road which will be elevated

“A major portion is taken by car parking and the paths are disjointed and not continuous. The width of the corridor means it will be dominated by the massive concrete pylons,” Hunt says.

At major roads and stations, the skyrail plans show great opportunity for positive community development. The proposed upgrade at Murrambeena Station includes plaza spaces and areas for potential development, areas that are likely to add more cafes and shops to the area, within close proximity to the station.

Along the South Morang-Hurstbridge line there is a section of elevated rail running through inner suburbs Collingwood and Richmond. Dr Morse, a Cafe and Bar down the ramp from Victoria Park station, has reaped the benefits of closeness to the station.

“The train station has many benefits… an influx of potential customers steaming past your shop front every day… it is also handy with liquor licensing. Having a train station right at our doorstep meant we didn’t really need to justify any parking amendments like a lot of new large venues do,” cafe owner Peter Walsh tells upstart.

Victoria Park station’s rail bridge is just over four metres, which does cast an amount of shadow within the area. The closeness of Dr Morse ensures that there’s a constant buzz in the area, with coffee served through a window in the morning and daytime, and dining and entertainment in the evening.

“It is essential that the space is well maintained to ensure it is kept presentable and usable by the community after it opens,” says blogger Daniel Bowen.

“Space underneath elevated rail in places such as Vancouver, Singapore and San Francisco have been used for parkland and playgrounds, as well as providing more points for pedestrians to cross the rail line, improving mobility.”

Development in these spaces will be gradual, as the growth of cafes, shops and the mentality within the community that train stations are a destination for more than transport. For Dr Morse on Johnston Street, the surroundings are constantly evolving. 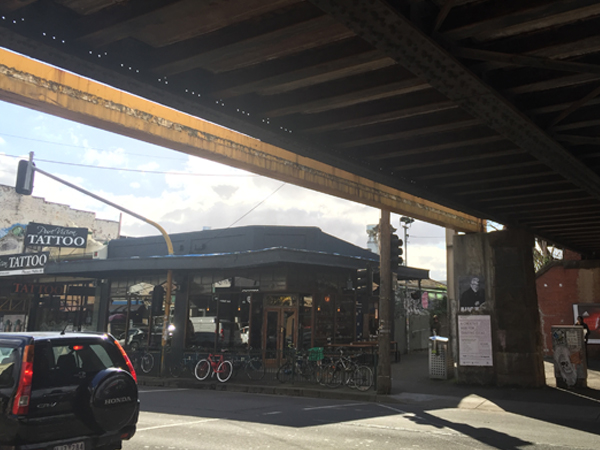 “The area has changed massively. When we first moved in there wasn’t much around here at all,” Walsh says.

“Now there are record shops, barbers, some new bars and great little independent shops. I would say that the area has definitely changed for the better.”

The removal of crossings will have a positive effect on traffic congestion but perhaps more importantly, may unite the community through increased public areas. Elevating the rail opens up the area instead of segregating it into north and south of the line, and centralises community areas around this fast and relatively inexpensive mode of transport.

If the area is well planned out and maintained to a high standard, it gives the best opportunity for the project to add to the community. This does however require the locals to buy into the project, perhaps a bigger challenge than the construction itself.