Trekkies. The mere name conjures up images of convention-going neckbeard nerds everywhere (‘Garr – live long and posper!’ while pushing greasy glasses back up nose). But with people such as Megan Fox, Ben Stiller and Rosario Dawson counting themselves as fans, is this image really fair? I’m a Trekkie. Sure, I’ve never been to a convention, but I’ve lusted after Picard, shouted at the telly when Neelix has been particularly stupid (i.e., always), listened in awe at Guinan’s dime-store philosophical ramblings, and loved every minute. Whenever I meet a fellow Trekkie at a party, I can engage in conversations that can go on for hours – at one Smith Street art exhibition a new best friend and I mimicked how Riker would enter a room again and again for about ten minutes straight (hint: shoulder first). But it got me thinking: what is it, exactly, about Star Trek?

Ever since the original series debuted back in 1966, Star Trek has had a stupendous effect on pop culture and social history right up to the present day. With the sleek lines of the Starship Enterprise, the wonders of the transporter room and the beautiful monochromatic uniforms, it’s immediately, iconically identifiable. Who can resist the blue-eyed stare of Captain James T Kirk, the eloquent, commanding voice of Captain Jean-Luc Picard, the fitted one-piece of Seven Of Nine? The sets, the props, the costuming and the storylines redefined science fiction for a new generation – and for the generation after that. 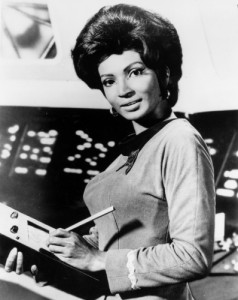 Everything about it is iconic and stylish, but not only that, it’s a franchise that’s prided itself on its forward-thinking and progressiveness. It boasted a multi-ethnic cast back in 1966, when much of the US was still segregated. An African-American communications expert, a Japanese helmsman, a Russian ensign, a Scottish engineer and, most shocking of all, a half-Earthling/half-alien science officer, all came together to make up a large part of the command team. (Of course, they were headed up by the all-American hero: a captain whose fists sorted out many a hostile alien negotiation, and whose smirk brought many a green-skinned maiden to her knees.) The studio didn’t like it and fought to change it, but creator and culture icon Gene Roddenberry stood firm.

It was also revolutionary in its hard science. The communicators in TOS (that’s ‘The Original Series’ to you noobs) work exactly like mobile phones – down to the clam-shell design and the lack of signal that occurs during certain types of storms (even in the 24th century you can’t win ‘em all). Oh and did I mention that Star Trek: TNG used iPads 23 years before they were invented? And it’s ‘dare-to-dream’ science is nothing to sniff at either: we have the obligatory ray-guns, of course, but there’s also the franchise-defining transporter (‘Beam me up, Scotty!’), the endless fun of the holodeck, and the problem-solving existence of the replicator (‘Tea! Earl Grey! Hot!’). Now that’s technology.

But the science focus wasn’t to the detriment of the characterisation. The struggle of Spock, a half-human/half-Vulcan who must battle his internal conflict and make peace with what he is; the neverending quest for humanity of Data, an android who is unique in the universe; the stoic battle of Seven Of Nine, a human Borg drone who begins a slow journey to embrace herself as human; these are the stories that Trekkies tune in for, as much as the strange new worlds and new civilizations.  Their journey is ours.  We share their victories, and we weep at their defeats. We wonder how they are going to get out of impossible situations, and we cheer when they do just that, with a shrug of their shoulders and a witty one-liner, mere minutes before the credits start to roll.

And the villains they come up against are nothing short of formidable. TOS had to battle it out against the quintessential bad guy, Khan Noonien Singh, in the second (and arguably best) Star Trek movie, Star Trek II: The Wrath Of Khan. Ricardo Montalban’s depiction of the genetically-engineered supervillain, with his David Bowie mullet, massive tanned pecs and cold, evil stare had theatre-goers trembling. Later on, the untouchable power of the Borg, a race of space travellers that seek out new life just to absorb and destroy it, brought chills to Trekkies everywhere with its emotionless directive: ‘Resistance is futile’. The cold ferocity of the Cardassians, the brutal violence of the Kling-Ons, even the greed and deception of the Ferengi all have their rightful place in Star Trek lore. Even Eric Bana’s portrayal of the Romulan Captain Nero in the 2009 reboot Star Trek brought the idea of the brooding Trek villain to a new generation of fans.

But always there was the idea of good triumphing over evil, and in Star Trek, that’s the way it has always been. Khan met his deservedly grisly end, over-reaching like Ahab for a vengeance he never earned. Likewise Nemo. And steely Captain Janeway brought her crew safely home despite the insidious danger of the Borg.

The mission of the Enterprise, to ‘boldly go where no one has gone before’ and the motto of Starfleet Academy, ‘Ex astris, scientia’ (‘From the stars, knowledge’) are uplifting and designed to appeal to the human spirit. Star Trek gives us a utopian vision of our future, a vision Roddenberry saw as attainable and highly desirable: no war, no violence, no poverty. The Enterprise was on a peaceful mission and its crew were explorers, boldly headed off into the far reaches of space. Why? Because it was there. Perhaps, as a Trekkie, I love these lofty ideals because they illustrate to me everything that humanity could be if it tried.  Rather than humans being obsessed with personal wealth and mired down with profit margins, Star Trek shows us the possibility of a future filled with hope, filled with excitement, and filled with the realised potential of a species that could be capable of accomplishing so very much more.

Either that, or I just love ray guns.

Renee Tibbs is the current editor of upstart, and has completed the Graduate Diploma in Journalism at La Trobe University.