Music fans in Melbourne were treated to two secret shows this week. 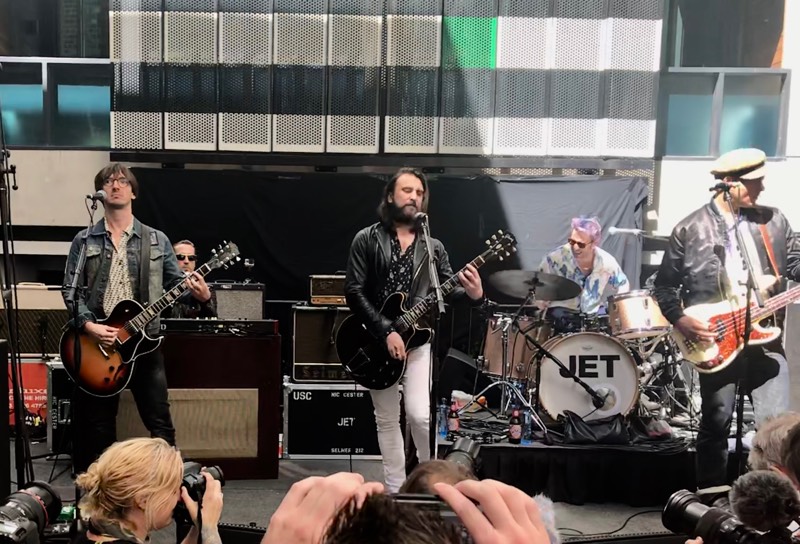 Melbourne rockers Jet played a surprise gig in AC/DC Lane in celebration of the 15th anniversary of their debut album.

The band hosted the free show on Tuesday afternoon, only one day after Ed Sheeran played a secret performance in Hosier Lane.

Both shows allowed fans to get up close and personal with the musicians in a low-key setting, surrounded by Melbourne’s iconic street art.

Secret gigs have been popping up around Melbourne for years. Just last year, The Killers played a surprise show in Brunswick.

These last-minute shows give fans an experience that no stadium can provide.

Fronted by Nic Cester, Jet smashed out hits including ‘Are You Gonna Be My Girl’ and ‘Get Me Outta Here’ from underneath the new statue of AC/DC’s Bon Scott.

The packed laneway performance is a preview of their upcoming national tour, ‘Get Re-Born’.

The tour will kick off in May and the band will play seven shows in total.

Jet will perform at Melbourne’s Forum Theatre on 11 June, where they will perform their 2003 album Get Born in its entirety.

The album sold more than 6 million copies, and featured hits including the Hottest 100 winner, ‘Are You Gonna Be My Girl?’.

Jet will also release a live album to coincide with the tour, Get Born: Live At The Forum.

Tickets are on sale 19 March via Live Nation.