The Geelong legend ends his career on an absolute high. 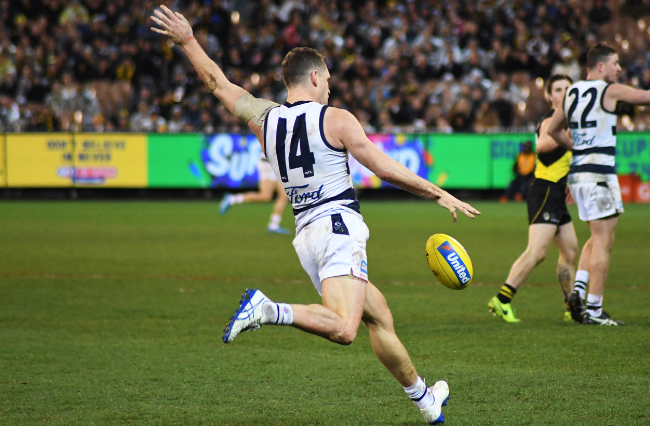 The only Cat to win four premierships played his 355th game in last Saturday’s AFL Grand Final, which was ultimately his last.

He made the announcement this afternoon, days after leading the Cats into winning their 10th premiership.

“Six weeks ago I decided that this would be it. Win lose or draw come the end of the year,” he told reporters at the club.

“I’ve had great support along the way.”

Selwood will go down as one of the greatest Geelong players of all time, and will be remembered for not only his courage on the football field, but also his kindness and generosity off it.

All of these qualities were on show in Geelong’s clash with Sydney in the Grand Final, as Selwood carried former teammate Garry Ablett’s son Levi, who suffers from a rare degenerative illness, through the banner before the game that he dominated collecting 26 disposals as well as kicking a memorable late goal.

The Geelong games record holder also spotted Cats’ waterboy Sam Moorfoot, who has Down syndrome, in the crowd after the game and invited him on to the ground to be involved in the team’s victory lap.

The 34-year-old’s career got off to a magnificent start, where in his first season of football he won the AFL Rising Star award as well as a premiership medallion.

The accolades kept on coming for Selwood, who was apart of the 2009 and 2011 Geelong premiership teams and finishes as a six-time All Australian and three-time best and fairest winner.

He took over the Geelong captaincy from Cameron Ling in 2012, and went on to win the AFLPA best captain award the following season and has now captained the most games in VFL/AFL history.

PHOTO: Joel Selwood kicking by Flickerd available HERE and used under a Creative Commons License. This photo has not been modified.