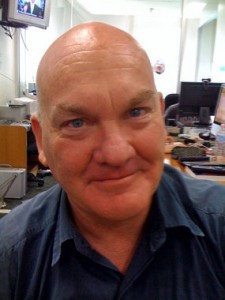 Jonathan Green got his start in journalism in 1979 through a cadetship at the Canberra Times, ‘falling into’ what he saw as the family trade. Since then he has written for and edited several newspapers, including the now defunct Melbourne afternoon broadsheet, The Herald, and he worked for 15 years at The Age in a range of roles. He later made the move to the web, becoming the editor of Crikey, before taking up his current position as the founding editor of the ABC’s online opinion and analysis site The Drum.

Jonathan is a softly spoken, modest man. He’s been in the industry for decades, and is unfazed when well-preserved rock legend Jon English walks by. And in what could be the sign of a good editor, he used a total of just 11 words in the email exchange that led to this profile podcast interview.

Masters student Matt Smith talks to Jonathan Green about his career and more in this ‘Working Journalist’ podcast. Click to listen.