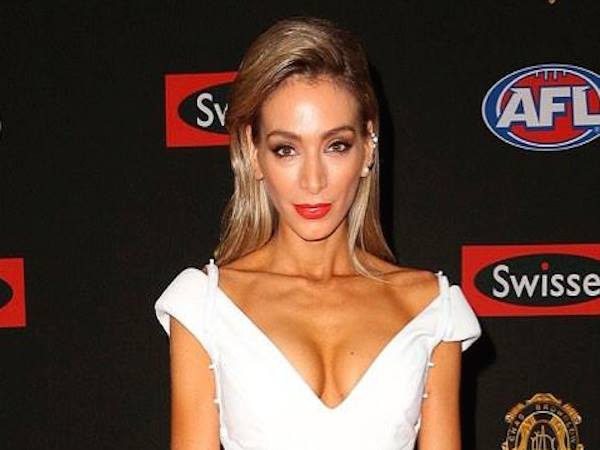 Last night’s Brownlow Medal was just as much about the fashion as it was about the Charlie. Some WAGs shone, while others were a little dull. upstart shares its favourites:

Rebecca Judd was a glorious waterfall of white in her structured, high-necked J’Aton Cotoure dress.

Accessorised by Paul Bram diamonds, the Queen WAG kept her glam simple with a pop of red lippy to keep the people going.

She can do no wrong.

Bec and Chris enjoying the #SwisseRedCarpet ahead of the #Brownlow Medal. https://t.co/ZI9ipcpuOm

Nadia Bartel was all ‘tomb raider meets Brownlow’ on the red carpet, in a white One Day Bridal neoprene gown with buckles, and studs.

Bartel’s ‘to the side’ hair do conveniently showed off an ear cuff as she looked up at her husband, the 2007 Brownlow Medallist, whilst he was speaking.

“Im loving the white on white look at the moment,” said Bartel. And that was that. 7/10

Jessie Habermann stunned in a Oglia Loro Couture gown, along with Anton Diamonds.

A walking modelesque crystal ball, Habermann gushed over the gown worth $26,000.

“I hope no one runs into me during the night,” she said.

Marc Murphy and his partner enjoying the #SwisseRedCarpet ahead of the #Brownlow Medal. https://t.co/X7HXg2hF9x — The Brownlow Medal (@AFLBrownlow) September 22, 2014

Jordan Papalia’s olive, greeny silver gown partnered with a choker and sleeves, was a bit of a blast from bridesmaids past.

I’m sure the sleeves had good intentions, maybe she has something up them for next year. 6/10

Gary and Jordan enjoying the #SwisseRedCarpet ahead of the #Brownlow Medal. https://t.co/oQgzz7sm7W

Renee Enright forsook all the rules and showed up in a suit.

Bedazzled pants, white blazer, and slicked back hair made for a chic, ‘out of the box’ Brownlow look.

Although not up to par with some of the other glamour WAG queens, Enright’s one of our favourites. 7/10

It’s all happening on the #SwisseRedCarpet ahead of the #Brownlow Medal. https://t.co/u1TmXq1NRe — The Brownlow Medal (@AFLBrownlow) September 22, 2014

The dress featured the ever popular low neckline and thigh high split, but we’re not complaining.

She’s glorious in gold, and definitely one of upstart’s best dressed. 9/10

Rory is in the house! Enjoying the #SwisseRedCarpet ahead of the #Brownlow Medal. https://t.co/skACbBbGnX

Jesinta Campbell shone all the way from Sydney in a grey Steven Khalil gown, but refused to be photographed without her beau, Buddy.

Her one armed, high-necked dress was a mix between glam and corporate.

Maybe next year Buddy can be on the best dressed list, and photographed solo instead. 7/10

Alex Davis wore moody dark blue to the 2014 Brownlow, and did she ever.

The gown was backless, in a deep navy blue, taking us back in time with her effortless ‘Hollywood Glam’.

Paired with a diamond encrusted clutch, Davis was the perfect addition amongst the brave, the ambitious and the gaga. 8/10

Scott and his partner enjoying the #SwisseRedCarpet ahead of the #Brownlow Medal. https://t.co/K2oBBmsgpV — The Brownlow Medal (@AFLBrownlow) September 22, 2014

Lauren Pavlich went with white on the night, and stunned all in the baby bump hugging, thigh touching, sternum showing number.

White lace hung from the bottom of her dress to add the ‘I’m being slightly modest’ touch to her dress.

Confidence goes a long way ladies, don’t be awkward, even If you’re pregnant and wearing a minidress.

Pav looking sharp! Enjoying the #SwisseRedCarpet ahead of the #Brownlow Medal. https://t.co/JZumuwAM7s

Breast seemed best as Geoffrey Edelsten’s on-and-off fiancé took to the carpet in a gothic-meets-Gaga dress of her own design.

Grecko’s accessories were half-gloves, with huge protruding silver spikes, that she described as “knives”.

Crystal tears descended delicately from her eyes, where the ‘goth’ of her inspiration came to fruition in the form of makeup.

By delicately I mean the crystals were everywhere, and it made me want to scratch my face.

Grecko’s neckline well and truly took the plunge, and may just drown in comparison between her spectacle and that of Edlesten’s ex-wife.

If anyone was thinking of fist pumping the night away with Geoffrey and Gabi, let’s hope they thought twice. 4/10

an Fitzgerald is a third-year Bachelor of Journalism student at La Trobe University, and the Fashion & Lifestyle editor for upstart. Follow her on Twitter: @SherydanFitzger.