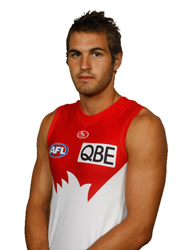 Every year grand final week throws up a story that makes the game unique and so special. This year that story comes in the form of Sydney midfielder Josh Kennedy.

Sydney’s long-standing ability to recycle players from rival clubs has shaped the team that has helped them reach today’s AFL Grand Final.

Of the 22 that will take to the field against Hawthorn today, six have played for other clubs prior to being recruited by the Swans. It would have been seven, had Ben McGlynn not injured his hamstring in the first week of September.

Leading the charge for Sydney will be the 24-year-old Kennedy, who has enjoyed a breakout year at the Swans.

The grandson of Hawthorn great John Kennedy Sr. and son of John Kennedy Jr., Josh was born to play for the Hawks.

His grandfather played 164 games for Hawthorn, but was most famous for his coaching career. Across 13 years Kennedy Sr. coached in 299 games and led the Hawks to three premierships. His work earned him a life membership at the club and a place in the Australian Football Hall of Fame. His legendary ‘don’t think, don’t hope, do’ speech made a lasting impression, not only at Waverly Park, but also in the widespread football community.

His dad, Kennedy Jr., then played 241 games for Hawthorn, winning four premierships to take the Kennedy family tally to seven.

In 2006 all was in readiness for Josh to complete the trilogy. He was selected by Hawthorn with pick 40 under the father-son rule.

Yet in a gifted Hawthorn side that would go on to win the 2008 Grand Final, Kennedy failed to break into the fold.

Limited opportunities saw him play just 13 games across two years, so when the Swans signaled their interest in him at the conclusion of the 2009 season, Kennedy could hardly say no.

Hawthorn was believed to have offered Kennedy a one-year contract extension with no guarantee of first team football. This just wasn’t enough for the talented 21-year-old.

Sydney, under the reign of Paul Roos, offered Kennedy a three-year contract, telling him he would be a required player in its first team.

Kennedy agreed to the move, and a deal was negotiated between the two clubs that eventually saw Hawthorn receive pick 39 in exchange for the midfielder.

The Hawks selected ruckman Sam Grimley with pick 39, a player who is yet to play for the club.

Kennedy joined a growing list of recycled players at the Swans. Rhyce Shaw had joined from Collingwood, Ted Richards from Essendon, Martin Mattner from Adelaide and Ben McGlynn, also from Hawthorn, had established themselves in Sydney’s best 22.

The Swans not only recruited recycled AFL players, but they also turned their attentions to other codes.

Kieren Jack, their 2010 Best and Fairest winner, is the son of rugby league great Garry Jack and was drafted from a rugby league background. Jack, along with Kennedy, has enjoyed a fantastic 2012 season.

Meanwhile Canadian Mike Pyke played 17 tests for Canada’s national rugby union side, famously running the length of the field to score a try against world number one New Zealand in 2007. He was also drafted at the conclusion of the 2008 season.

Once at Sydney, Kennedy set his sights on hard work and continued improvement.

The results highlighted his determination to succeed at the Swans. Throughout 2010 and 2011 he had a gradual improvement in his possession statistics, resulting in a third-placed finish in Sydney’s Best and Fairest in 2010. He then went one better in 2011, finishing second in the Bob Skilton Medal.

2012 has since seen Kennedy enjoy his best season yet. Averaging 28.4 disposals per game (8th in the competition), the midfielder finished eighth in the Brownlow Medal count last Monday.

He’s been incredibly influential for Sydney throughout the season. His ability to stand up in a tackle and manage to work the ball out of even the tightest of packs has seen him lead the competition in both contested possessions and clearances.

He has a superb understanding with his other midfielders. His inside work with Jack and Ryan O’Keefe has been sublime, and has helped outside runners such as Lewis Jetta and Jarrad McVeigh shine throughout the year.

Kennedy has also relished the opportunity of coming up against his former side. Having played Hawthorn twice already throughout the home and away season, Kennedy accumulated five out of a possible six Brownlow votes for the two games against the Hawks.

In round five’s 37-point win, Kennedy amassed 27 disposals, 11 tackles and kicked three goals to lead his side to victory. He then backed up that performance in round 22’s seven-point loss, where he managed 35 disposals, nine clearances and kicked one goal.

With the Kennedy family already holding seven premierships between them, there’s no doubt Josh will want to add an eighth today.

Whether he can add a red tinge to what has for so long been a brown and gold family name will be revealed today.

Riley Beveridge is a first-year Bachelor of Journalism (Sport) student at La Trobe University.  You can follow him on Twitter: @RileyBev

This piece was first published on From The Sideline.